RE signal DCD is contributed by the following two components:

•           NAND Flash internal RE DCD: RE clock at NAND input is distorted by NAND internal logic circuitry passing out of NAND as DQS launches back to the FMC.

The total RE signal DCD can be approximately 10%~13% in a system, depending on data rates. 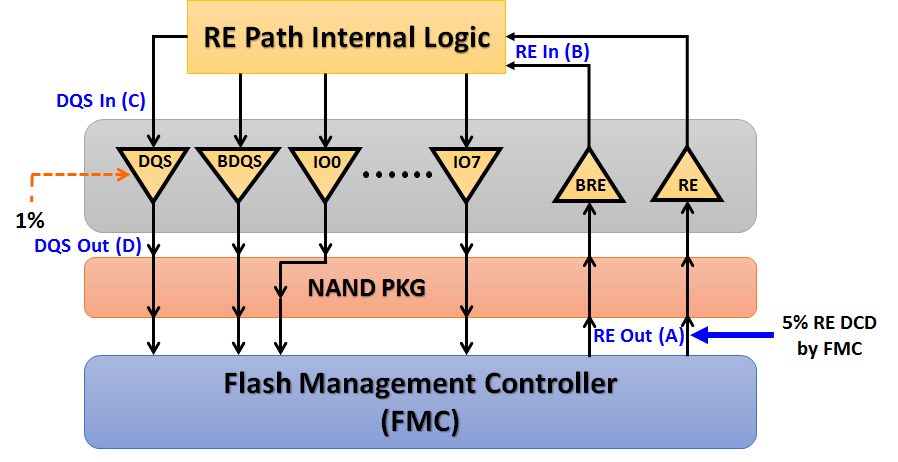 However, when we apply this analysis method on an 8-die @ 400Mbps NAND system, the simulation results showed many fewer degradations as compared to the real measured data.  (as shown in Figure 2)

The major limitation of the conventional DCD analysis method is that it ignores jitter amplification. It has been validated by previous studies that jitter (including SJ, DCD and RJ) can be amplified by a lossy channel even when the channel is linear, passive, and noiseless. And the effect grows exponentially with insertion loss and data rate [4,5,6,7] (as shown in Figure 3). It is worth pointing out that input jitter also causes amplitude modulation in the output signal, resulting in eye height impairment. 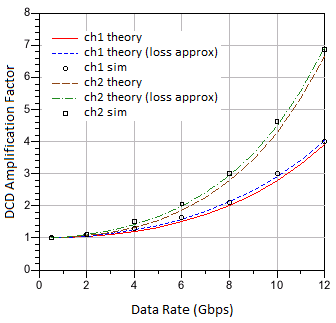 Due to the aggressive storage capacity requirements, multiple NAND Flash memory die are stacked in a highly integrated complex package system. Because of the cost-effective package solution used, imperfect ground reference, and wirebond connections, the return loss and insertion loss get progressively worse for higher speed and heavier loading Flash systems (as shown in Figure 4 and Figure 5). 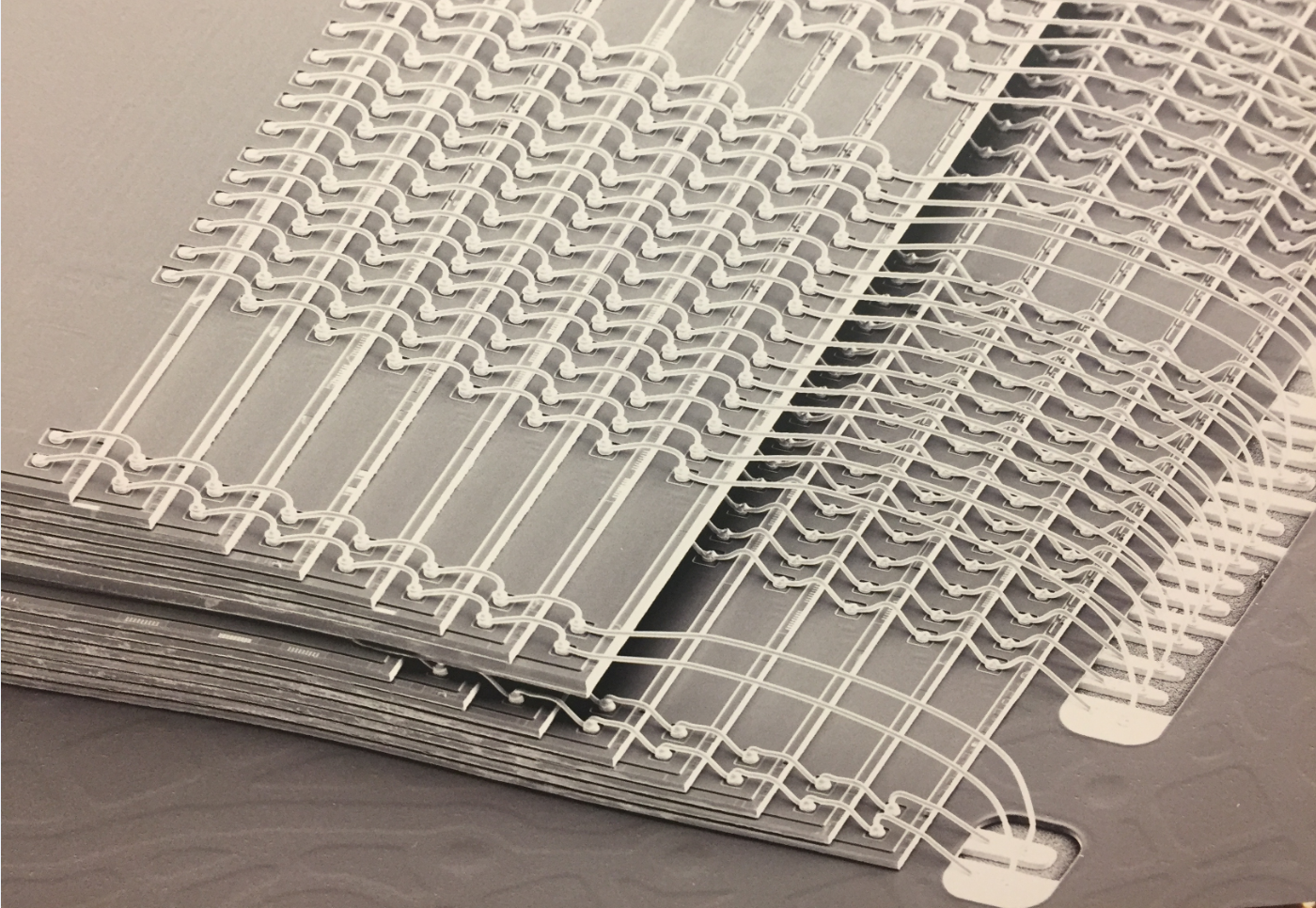 To resolve the limitation in conventional methods, we performed transient simulation on an 8-die embedded system at 400MBPs with a non-ideal duty cycle input signal in HSPICE (Figure 6). As expected, by introducing the real duty cycle signal in system simulation, the jitter amplification and the DCD induced amplitude modulation are both well accounted for in the simulation. 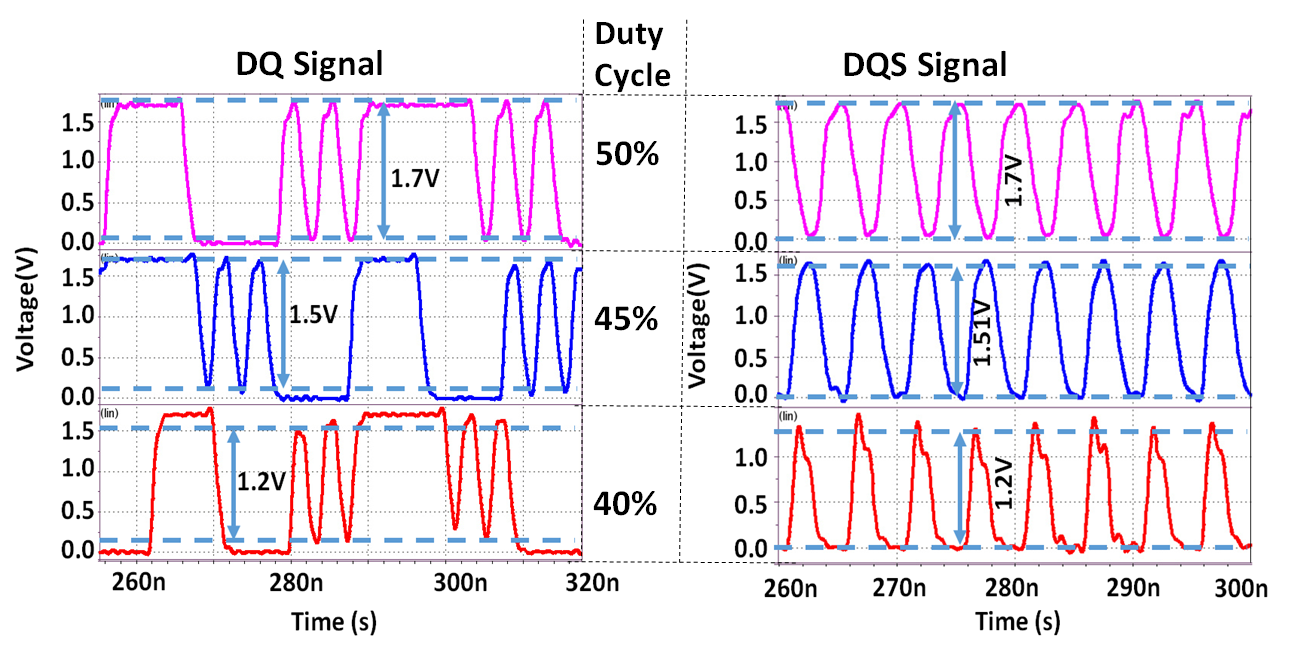 However, most SPICE-like simulators do not provide a non-ideal duty cycle input signal source, so a special Verilog-A based source module had to be developed. Also, the high simulation cost becomes another major barrier to using a SPICE-like simulator for systematic DCD analysis. (For example, for a typical 1-byte NAND system, HSPICE took around 5 hours to generate a several-hundred bits waveform.) The next section introduces a statistical-based simulation approach (ADS DDR BUS Simulator) to analyze the DCD impact systematically and more efficiently.

The statistical simulation methodology was developed and widely used for high-speed SERDES and memory systems such as PCIe4 or DDR4 [9]-[10]. It calculates eye distribution probability directly at ultra-low BER, without running an actual bit sequence at any desired BER level (as shown in Figure 7). This approach offers an extremely fast means of measuring the eye opening at ultra-low BER levels. 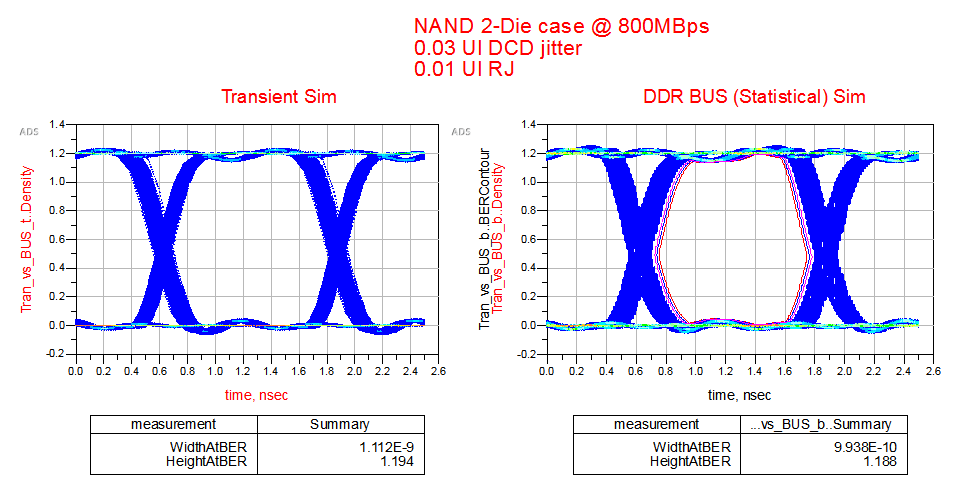 A 1-byte NAND simulation test bench was created in ADS as shown in Figure 9. An ADS batch-mode simulation controller was used with the DDR BUS simulator to sweep all variables and channel models automatically as described in Table 1. 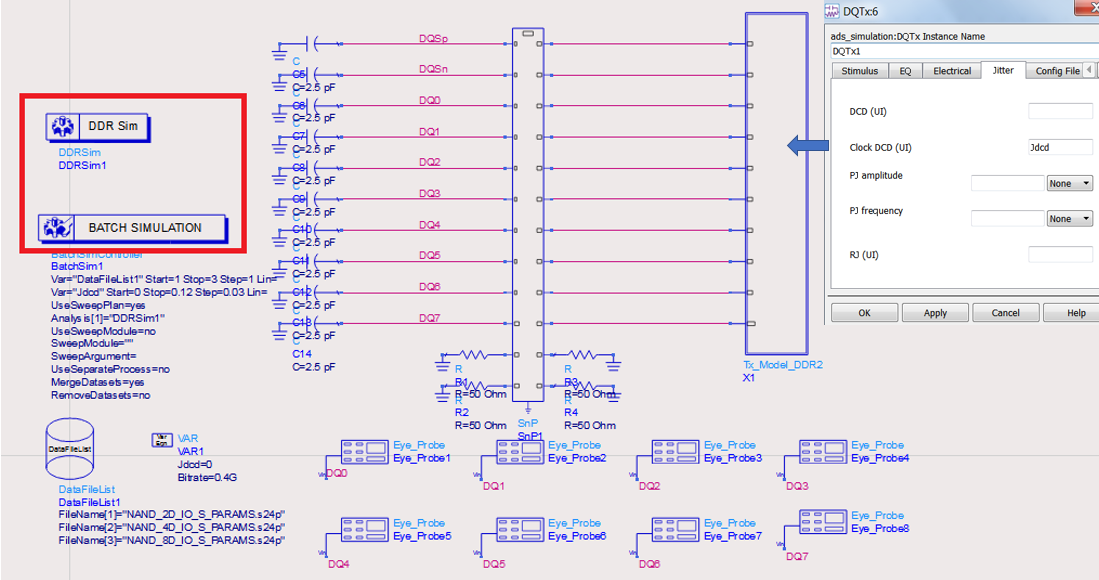 The simulation finished in 6 mins for all 15 sweep cases. Figure 10 shows the eye-diagrams of DQ5 at 1200MBps. Significant eye shrinkage was observed when the DCD and die numbers increased.  For the 0.12 UI DCD, 8-die design case, the simulated eye-diagram already violated the eye mask specification. 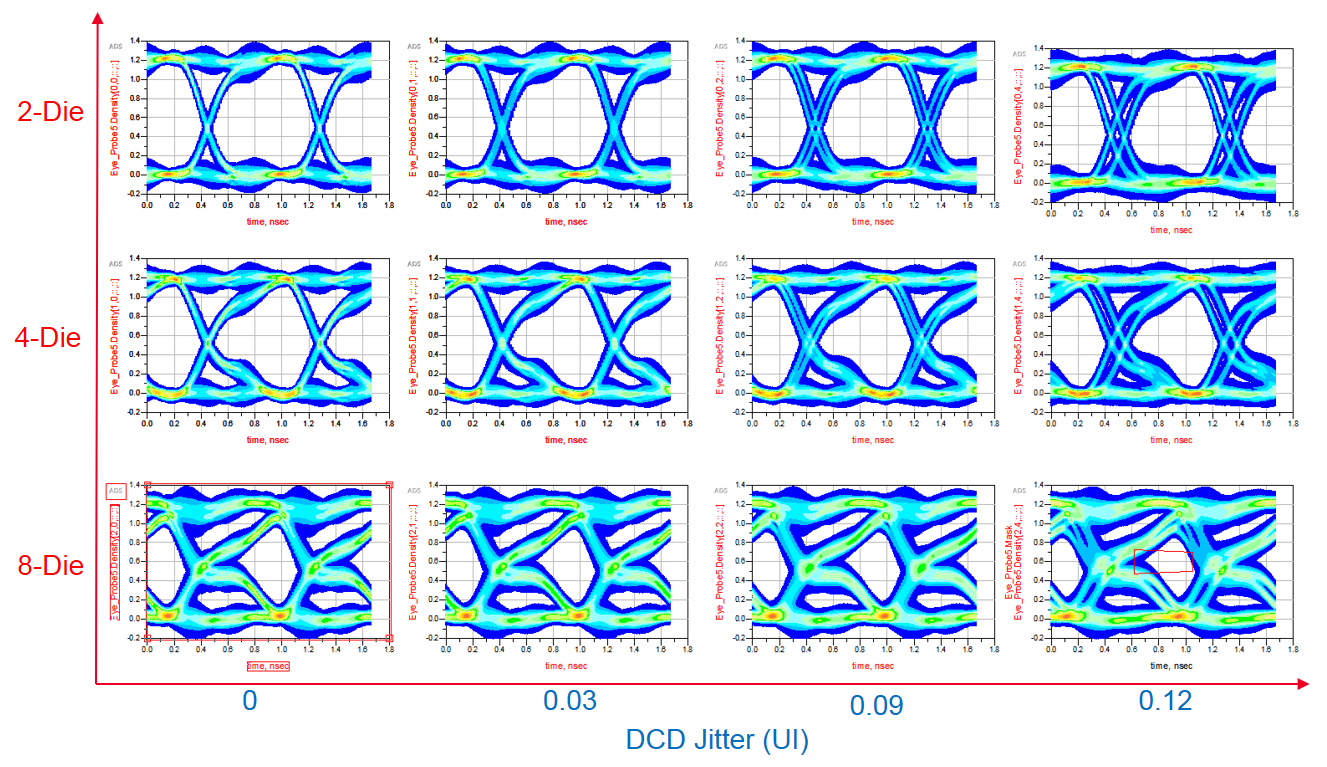 In addition to the eye-diagrams, the eye-height (EH) and eye-width (EW) were also measured at the 1E-12 BER level. The EH and EW shrinkages, normalized by the original EH and EW of the non-DCD case, were calculated based on the simulation results.

Figure 11 shows the DCD induced EW shrinkage increase linearly with the DCD. However, the DCD amplification was observed in all the simulation cases. The worst case was seen at the 1200Mbps and 8-die case, the 12% DCD input jitter caused about 37% EW shrinkage. 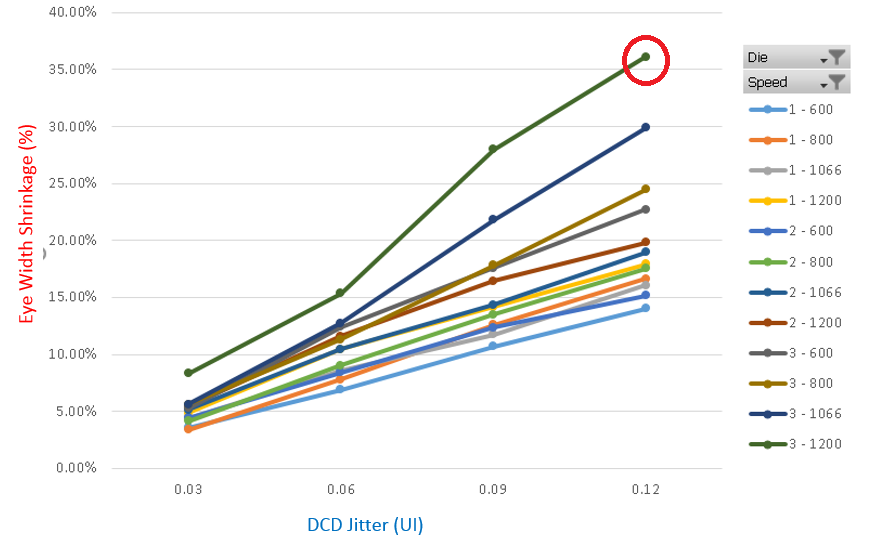 Figure 11: DCD induced EW shrinkage as a function of DCD

Also, Figure 12 shows that the DCD-induced EW shrinkage increases exponentially with the data-rate and die number. This is because more stacked dies will induce more insertion loss and return loss in the channel. This is consistent with the jitter amplification factor increasing trend as shown in Figure 3. 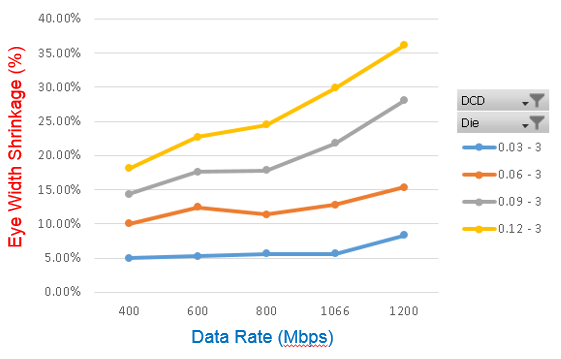 Finally, a significant amplitude degradation was observed in a real measurement. This is because any input jitter will induce amplitude modulation in the output signal due to channel dispersion, leading to voltage noise at the channel output. The EH shrinkage was also predicted by the simulation as shown in Figure 13. The normalized EH shrinkage also increased exponentially with the data-rate. 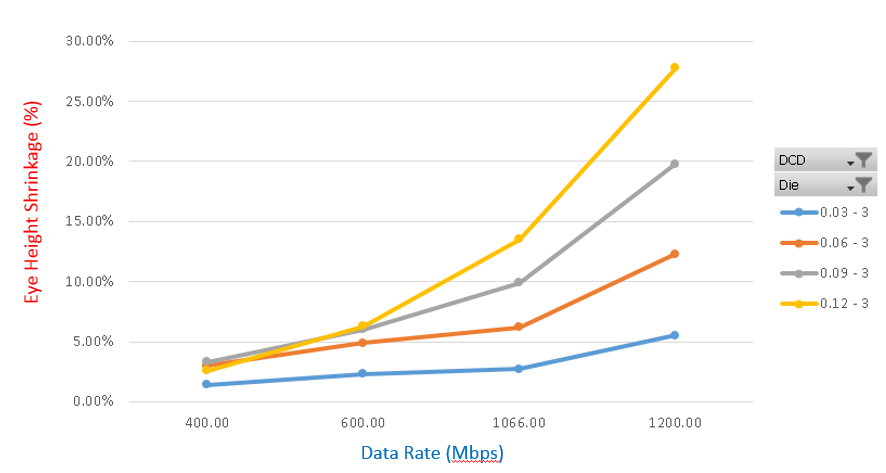 The impact of RE duty cycle distortion (DCD) must be integrated in NAND FMC. And SI simulation should be done to predict system level performance accurately in a multi-die, high performance system. The conventional DCD analysis approach assumes the DCD-induced EH and EW will be linear at all the data rates so it will under-estimate the DCD impact, especially at higher data-rate and heavier-loading NAND system.

This paper proposes a new, statistical-based, system level NAND SI simulation methodology for more accurate DCD-included jitter and noise analysis. Comparing to the traditional SPICE-like simulator, this statistical-based approach provides a much faster simulation speed and an easier way to insert the RE DCD jitter into the input signal.

This paper has been modified from its original form, which was presented at DesignCon 2018 and won a Best Paper Award at the event.

Sayed Mobin is a senior manager with the Western Digital NAND Flash Memory Organization. He received his Master’s degree in electrical engineering from Virginia Tech, VA and his Bachelor’s degree in electrical engineering from Bangladesh University of Engineering Technology, Bangladesh. He has led the Western Digital NAND Flash SI team for the last four years. His focus is to evolve the signal integrity and power delivery infrastructure in Western Digital’s SanDisk Memory organization; provide critical decisions in future I/O design; and support both internal business units and external customers. Before Western Digital, he worked as a signal integrity lead at NVidia, focusing on mobile handheld system development for six years; as a signal integrity engineer at Intel Corporation for six years, focusing on signal integrity and power delivery solutions for wafer and package-level test environments; and conducted research in innovative solutions for multicore testing.

Cindy Cui is an application engineer with the EEsof Team at Keysight Technologies, Inc.  She received her Master’s degree in micro-electronics from Tianjin University.  She has over six years of service and support experience on high-speed digital, RFIC design, and device modeling at Keysight.  Her focus is mainly on DDR4 Design, PCIe, IBIS modeling, and the correlation between simulation and measurement.  Cindy has authored several technical papers in the field of high-speed design.