With the growth of 5G data traffic and AI computing, data centers need faster connectivity to meet the increasing bandwidth. High speed I/O speed beyond 112 Gb/s per lane is required. If we follow the SerDes technology revolution by doubling the data rate per lane in every 2-3 years, the next generation I/O data rate will be 224 Gb/s. This article explores options, technical challenges, and potential solutions to achieve 224 Gb/s per lane.

Options to achieve 224 Gb/s per lane

To achieve 224 Gb/s per lane, the leading options for consideration are:

The current 112 Gb/s per lane electrical interfaces predominantly use the 4-level pulse-amplitude modulation (PAM4) modulation scheme at a baud rate of 56 Gbaud, 4-level signaling with 2 bits per symbol. If we stay with PAM4 modulation, the data rate of 224 Gb/s requires a baud rate of 112 Gbaud.

With signaling rate increasing, electrical channels like PCB traces or copper cable both have bandwidth limitations over certain reach distances. Alternatively, optical fiber cables can be used to transmit high bandwidth data over long distances. There are new emerging technologies such as chiplet and co-packaging optics (CPO) where the majority of the channel is in the optical domain.

For the Option 1 to double the signaling rate, the major challenges are: 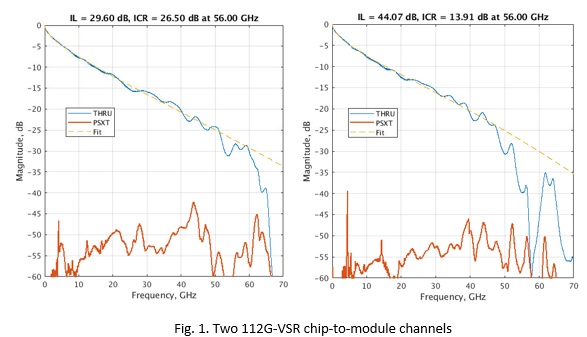 The challenges for the Option 2 to increase constellation size are:

Table 1 lists key parameters for different PAM schemes, such as the number of bits per symbol, signaling rate, unit interval, fundamental frequency, SNR penalty, and jitter tolerance. We can see that increasing modulation levels can help reduce the bandwidth and the sampling rate, but with the cost of higher SNR penalty and sensitivity to noise and jitter. 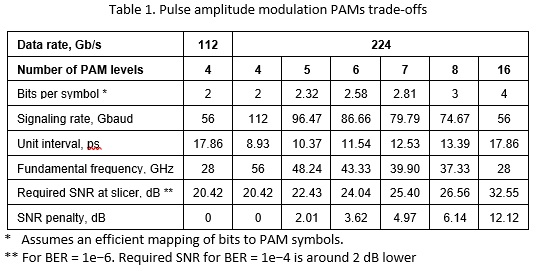 For Option 3 (using optical cables instead of PCB traces or copper cables), we can study the next-generation application spaces shown in Figure 2. With signaling rates increasing, electrical channels might reach capacity and have to shorten the distance. PAM4 signaling can drive die-to-die/OE, chip-to module, chip-to-chip, and even chassis-to-chassis interfaces through substrate traces within a package, PCB traces over a board, or copper cables at 112 Gb/s. Can these 112 Gb/s electrical channels still support 224 Gb/s? 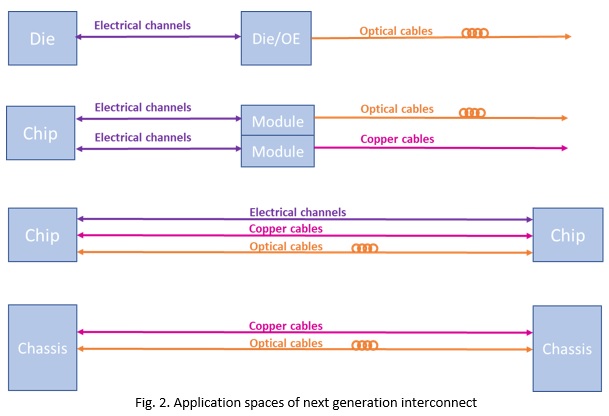 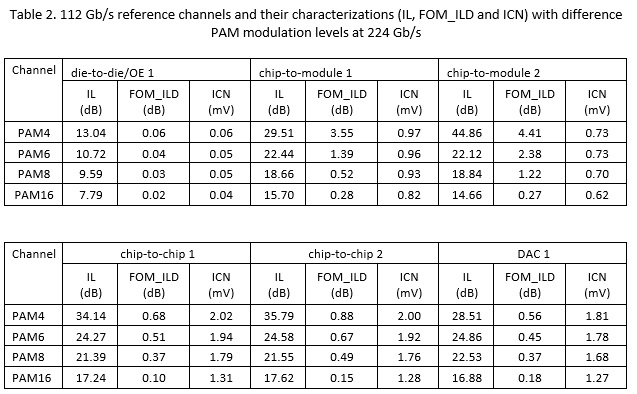 To study the performance trade-off for different modulation schemes, the method of Salz SNR for an ideal decision feedback equalization (DFE) receiver [2] with added implementation penalties is used.  Figure 3 shows the block diagram of a link model and Table 3 gives the modeled impairments and their values included in the simulations. 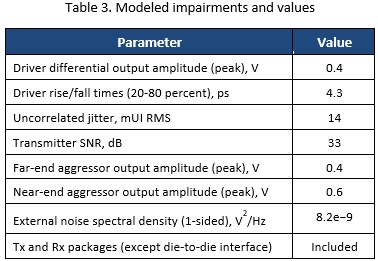 In Figure 4, the calculated SNR margins (Salz SNR – SNR required to achieve specified DER) for different modulation levels PAM4, PAM5, PAM6, PAM7, and PAM8 are compared with DER targets 1e-6, 1e-4, and 1e-3. It is worth noting that the Salz SNR is an upper bound on performance, and an implementation allowance must be made for the limitations of practical receivers for circuit noise and distortion, receiver jitter, quantization effects, and finite-length filters, as these are not modeled in the Salz SNR calculation. The value of implementation allowance heavily depends on the individual SerDes architecture and circuit design. While an implementation allowance value is not proposed in this article, we may leverage the value of 3 dB as the channel operating margin (COM) and see that: 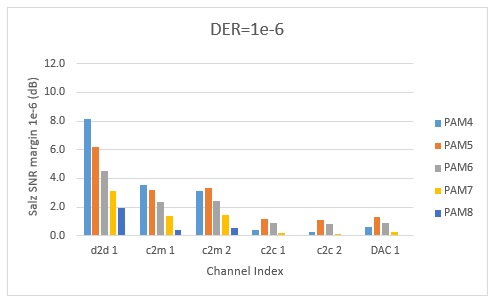 From the channel capacity and SNR margin, we can conclude that electrical channels will continue to be viable after 112 Gbps. For longer distances, such as chip-to-chip and chassis-to-chassis interfaces, higher modulation schemes (PAM5 or PAM6) can be used to relax channel bandwidth requirements. Promising results for die-to-die/OE and chip-to-module analysis should enable co-packaging and pluggable optics at the next speed node.

[3] Cathy Liu, “What is FEC, and How Do I Use It?” Signal Integrity Journal, https://www.signalintegrityjournal.com/articles/1284-what-is-fec-and-how-do-i-use-it