Samtec and Molex Share IP to Reshape Future of Connectors Molex and Sametec announced a collaboration on next-generation data center solutions this spring; specifically, they signed a “Licensed Source Agreement” for their Molex BiPass™ and Samtec Twinax Flyover™ Systems for high-speed data (56G and 112G) speeds. The agreement covers cable, cable assemblies, and connectors, and, at its most basic level, aims to offer customers a second source. The bigger question is, what does this agreement mean for engineers working on the latest high-speed designs?

Both companies had been working with many of the same customers to provide their BiPass and Flyover products. This, combined with Tier-1 data-center equipment vendors need to have multiple sources for key components, made it a logical next step for the two companies to access each other’s intellectual property (IP) as it affects the other products. “This agreement enables two companies that are technology leaders in this field and help to promote a faster and broader proliferation of the technology,” says Brent Hatfield, New Product Development Manager, Molex. The agreement includes next-generation high-speed cable, cable assemblies, and connectors.

Hatfield notes that for Molex customers, any issues around IP are clarified, and customers can feel more secure to work with both companies. The agreement was partially driven by customer requests regarding IP as well as to provide multiple sources for the connector solutions. Hatfield adds, “It means that both Molex and Samtec can offer solutions that greatly reduce losses of a PCB by directly connecting a point near the ASIC to front panel I/O or back panel backplanes.  The two leaders in the field can make use of each other’s’ IP and are free to cooperate in other areas. “

As far as the agreement’s impact on distribution networks, Brian Vicich, VP of Engineering, Samtec, Inc., reports that he doesn’t anticipate any changes to their distribution strategy for now.

According to Hatfield, both product lines approach their customers’ design challenges in the same fundamental way—by significantly lowering losses from the ASIC to the front or back panel I/O or backplane ports. Where they differ is in cable construction, internal connector construction, and board-mount connectors near the ASIC. In essence, the products serve the same function, they just approach it a bit differently. Vicich notes that the Molex and Samtec QSFP28 and QSFP-DD products are already port-compatible, and both companies are “evaluating all options at the moment of supporting dual footprints.”

What Molex and Samtec have both achieved in these “above the board” interconnect designs is significant. As with all leading-edge designs, there was bound to be challenges and limiting factors.

For Samtec, the challenge was to develop full-channel connectivity solutions instead of just a node in the system (see Figure 1). Vicich says, “This approach requires a dedicated signal integrity team, world-class high-speed cable development, and highly advanced interconnect contact designs.” He notes the importance of advanced simulation in advance of tooling the product, and performance validation after it is made. 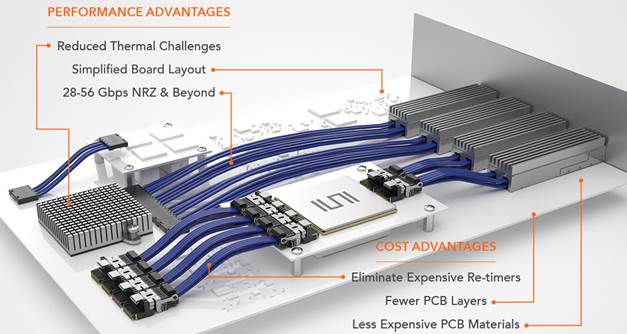 For Molex’s Hatfield, the technical challenges fall into four categories. The first is minimizing loss and noise in the channel, which means increasing the signal integrity from the ASIC to the panel. Second, the connection from the BiPass product (see Figure 2) to the PCB needs to be very high density to minimize the use of board real estate, yet the contact spacing has to allow for efficient manufacturing and population of the PCB. The technology exists at the connector level to make much smaller connections than can realistically be manufactured in volume, so designers need to be careful. He points to the company’s NearStack, which has a 0.6mm pitch, allowing it to be efficiently installed by contract manufacturers and still offering the target performance. 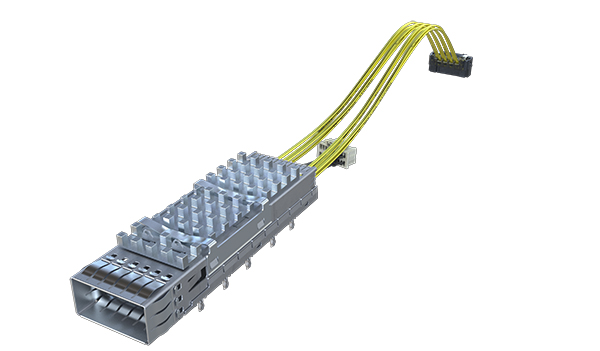 The third challenge Hatfield identifies is cable management, noting that a 32-port 1U enclosure can have 512 cables going to the board. Customers want a cable management feature so the contract manufacturer can install a unit fully populated with BiPass. He says, “In many cases we supply a large segment of the chassis, loaded with BiPass assemblies, and the NearStack connectors already in place so they can just be pressed down to mate on the board.  This takes most of the operator / installer sensitivity out of the equation, thus enhancing the manufacturing process and quality control.  This was a new area for us that our customers demanded, and part of what makes BiPass a solution rather than just a product.” Finally, there is test, requiring the complete system trays to be fully tested as a unit. Molex had to design special test equipment and fixtures to handle the resulting large number of I/Os.

It remains to be seen if the companies will produce any products together, but both representatives indicated that the collaborative conversation is ongoing.  For now, both companies seem to have their eyes firmly fixed on their respective product roadmaps.  How high will they go? Vicich notes that Samtec has demonstrated 112 Gbps PAM4 data rates across its Twinax Flyover solutions.

Hatfield concurs that the products today can perform at 112Gbps for a channel link that includes 2 meters of passive copper cabling between ports with a 28dB ball to ball margin, adding “One thing is becoming clear though:  BiPass will play a key role in 112Gbps deployments. “  Looking ahead to the future of copper links, Hatfield reflects on the doubt people have regularly expressed for copper to continue. He says, “most people saw the end of passive copper interconnects at 56Gbps. As little as a few months ago several suggested there would be no 112Gbps passive copper links.  We now know that there will be.  The economics will drive it, as they always do.  As for the future, it is hard to predict, but I am confident that 112Gb will not be the final data rate for passive copper, and that BiPass will play a pivotal role in successfully deploying 224Gbps solutions a few years from now.”

As far as product roadmaps, Vicich points to the Flyover technology architecture’s flexibility, hinting that new connector families will follow the ones introduced earlier this year. Hatfield was more specific about Molex’s plans, noting several products on the roadmap:

One thing is for sure, this agreement has enabled two technology leaders to work more closely together, and we can expect that to lead to a broader uptake of the technology. For more information on Samtec Twinax Flyover Systems, visit www.samtec.com/flyover. For more information on the Molex BiPass system, please visit www.molex.com/bipassassemblies.