Why does a low cost through-hole SMA have a lower bandwidth than a surface mount SMA? The answer will surprise you.

A typical coaxial connector assembled on PCB can be divided roughly into two main parts: the cylindrical part on which the coax cable is screwed or pinned, and the part that is assembled to the PCB with the return path vias. The connector's bandwidth is limited by the first frequency that causes one of the connector's parts to resonate. At the resonance frequency, the wave impedance inside the connector increases dramatically, and so do the reflections from the connector.

For example, in the sub-miniature version A connector (SMA) depicted in Figure 1 the cylindrical part of the connector has an outer diameter D=4.13 mm (164 mil) and it is filled with Teflon (εr=2.2). The part of the connector that is assembled to the PCB (dielectric constant is 3.8) is made up of four return path vias, which are 200 mil apart from each other.

As shown in Figure 2, as long as (1) Lx, Ly < λ (λ-wavelength), the structure with the four return path vias can be approximated as a closed structure with boundaries of highly conductive material that reflect the propagating waves and cause the structure to resonate at certain frequencies.

The structure in Figure 2 is a kind of rectangular cavity resonator. Assuming that the length of the return path vias is smaller than L =Lx, Ly, the possible resonance frequencies in this cavity is given by (2) [1]:

When (2) is identical for both TM and TE modes,

is the intrinsic propagation velocity and m,n are the mode numbers. As can be seen, (2) depends on the geometry (Lx, Ly) and the dielectric material (εr) of the cavity. However, not every fmn frequency will cause the structure to resonate. This depends also on the excitation itself: (a) whether the signal has energy at frequency fmn and (b) the location of the signal via inside the cavity. Different signal via locations will cause the structure to resonate at different fmn frequencies.

The first time that the structure in Figure 2 will resonate is when the length of its longest edge is equal to λ/2 (in this case assumption (1) is still valid). In our example, we obtain:

Figure 3 shows a simulation of transition through a signal via located in the middle of a structure with 4 return path vias. 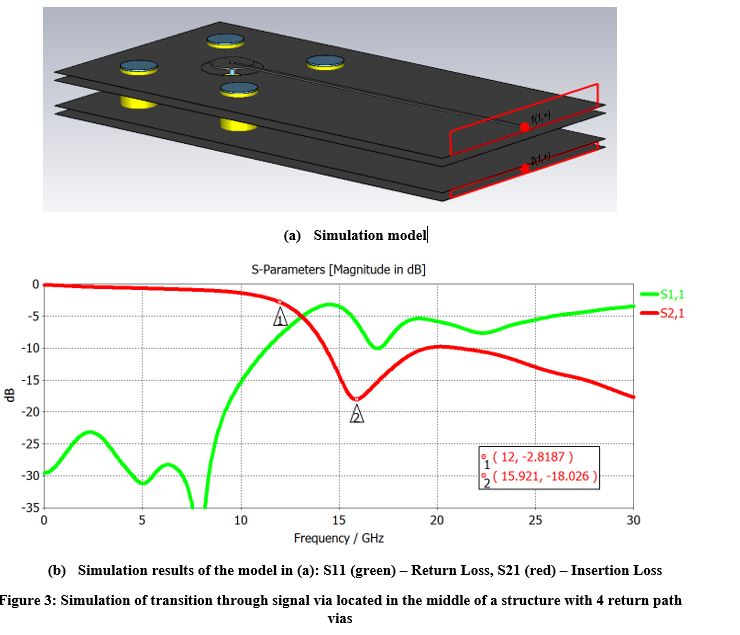 The other part of the coaxial connector (the cylindrical part) is a kind of circular cavity resonator. The possible resonance frequencies in this cavity for TM and TE modes are given by (4) [1]:

Substituting the dimensions from the example into (5) yields the first 2 possible circular mode resonance frequencies:

Figure 4 shows TM010 and TE110 electric and magnetic fields inside the cylindrical part. 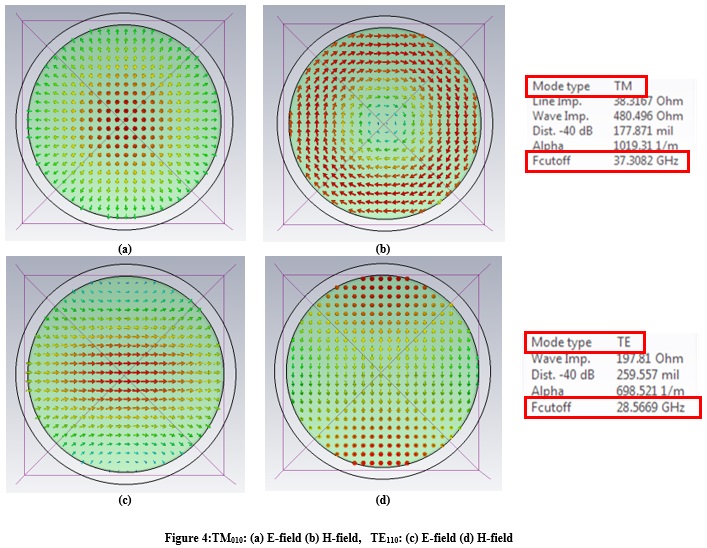 Because both f TE110 and f TM010 are larger than f10, we conclude that the rectangular cavity resonator, made by the four return path vias, determines the SMA bandwidth – and not the cylindrical part of the connector.

Figure 5 shows measurement results of a 50 Ω single-ended line connected with an SMA at its ends. The measurement results show the influence of the rectangular cavity resonator made by the 4 return path vias. A wide dip appears in the insertion loss at the resonance frequency (f10) at 16.5 GHz, which degrades the insertion loss from 12 GHz and increases the return loss dramatically. 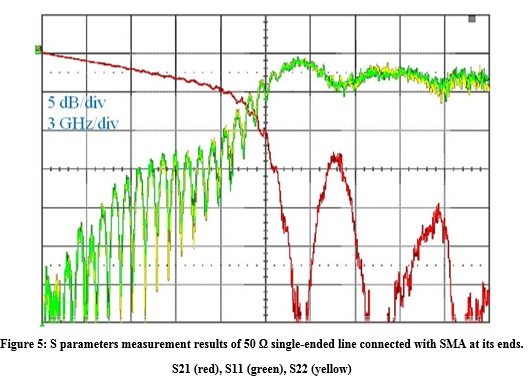 As long as the distance between the return path vias is smaller than the wavelength, the new return path via structure can be approximated as a cylinder with highly conductive material boundaries filled with the PCB dielectric as depicted in Figure 6(d). This structure is a kind of circular cavity resonator with resonance frequencies as in (4) and (5). For example, if we place the return path vias 50 mil from the signal via (D=100 mil), we obtain f TE110 = 36.1 GHz by using (5), which is more than two times f10. Another advantage of the cylindrical return path via structure is that it reduces significantly the signal via radiation into the PCB. Figure 7 shows the insertion and return loss measurement of a 100 Ω differential microstrip connected with optimized SMA. It can be seen that the insertion loss drops off monotonically with no resonances up to 24 GHz and with return loss less than ‑13 dB.

Further improvements in coaxial connectors are based on (5). According to (5), in order to increase the circular cavity resonance frequencies it is necessary to (a) reduce the dielectric constant inside the cavity, and, therefore, the Teflon (εr=2.2) is replaced with air (εr=1) and (b) to decrease the outer diameter D. These new coaxial connectors are named according to their outer diameter D: 2.92 mm, 2.4 mm, 1.85 mm, and 1 mm.

Applications of High Bandwidth AWGs in Receiver Testing: Tricks of the Trade

S-parameters: Signal Integrity Analysis in the Blink of an Eye