The goal of power integrity (PI) analysis is to ensure not only sufficient but also stable power to all chips in a system. With ever increasing printed circuit board complexity and decreasing system size, ensuring that critical chips receive stable power is becoming more important. Optimizing their location and value as early as possible in the design phase will reduce the risk of late stage design changes or board re-spins. Stability of the power rail to critical chips can be ensured by keeping the impedance of the power rail below a specific target [1].

Decoupling capacitors are an inexpensive method of lowering impedance over a range of frequencies. There are many possible parameters to sweep and consider when selecting on-board decoupling capacitors to optimize power plane impedance [2]. Not only can we consider the number of capacitors and their placement, but we should also sweep their capacitance, equivalent series inductance (ESL), equivalent series resistance (ESR), and their mounting inductance in reducing the power plane impedance below a safe target. 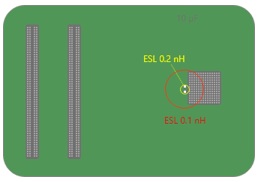 Figure 1: Effective radius of a 10 µF capacitor with ESL of 0.1 nH (red circle) compared to the effective radius with an ESL of 0.2 nH (yellow circle). Values are taken at 15 MHz.

Here we show a quick optimization process for decoupling capacitor placement and selection in a DDR-4 design consisting of a memory controller with two daisy chained dual in-line memory modules (DIMMs). The design is in the post-layout stage where the need for quick analysis and feedback to the layout designers is key. We analyze the impact of decoupling capacitor changes using a hybrid solver with an adaptive finite element mesh in two dimensions. We focus our analysis below 20 MHz, where the impedance of surface mount capacitor components used in PCB designs can have a big impact.

At these frequencies, the wavelength of electromagnetic energy is

. The wavelength is calculated from the speed of the electromagnetic energy,

where c is the speed of light in air, and we assume a relative dielectric constant,

, common for FR-4 based designs. Since the wavelength is significantly greater than the size of the PCB design we are considering, the quasi-static approximation holds, and our simulations can provide quick feedback to the board design team. 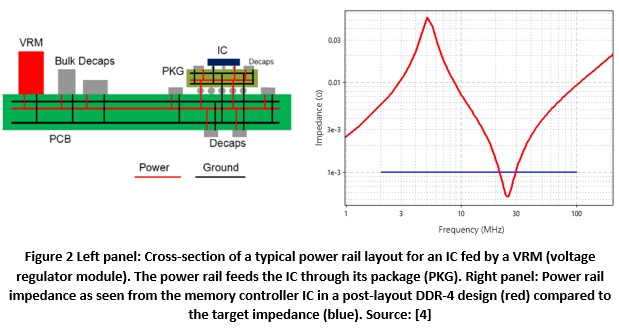 Looking at the impedance of the power rail from our DDR-4 memory controller chip, we see that it is exceeding the target impedance at many frequencies (Figure 2 right panel).  This design has already been laid out and is using over 100 decoupling capacitors on this power rail, but our impedance is still exceeding the target by more than 10x at some frequencies. Target impedances are set to keep noise margins on the power rails in a safe range. When the power rail impedance exceeds the target significantly, any transient power current noise can lead to dangerous levels of voltage noise for any chips connected to the rail. Improving our power rail impedance on this DDR-4 design will greatly reduce the risk that we will require a design re-spin due to noise on the memory controller chip.

We first consider the placement of the decoupling capacitors on the board by simulating their loop inductance to the pins of our chip. To perform this analysis, our hybrid simulator creates a measurement port at the power pins of the chip and shorts the capacitor terminals to give users the loop inductance due to the PCB layout alone. From this analysis, we found four decoupling capacitors on this power rail far away from our chip. There is space on our board to move two of them closer. This simple change decreases the impedance seen from our rail getting us closer to the target impedance at no additional fabrication cost (Figure 4).

The placement of these capacitors makes them ineffective, and the high loop inductance of the rail to these devices makes them more prone to generate or pick up noise on the very dense PCB design. This means that their presence on the board provides little benefit and can actually cause harm to sensitive signal nets nearby.

Coming back to our DDR-4 post-layout design, we next consider an optimization looking at the number and type of capacitors in the design. The left panel of Figure 4 shows the different capacitor models used in the optimization process. Our optimization takes less than 30 minutes to analyze more than 100 decoupling capacitors placed in this design, and we achieve a result that is below the target up to 10 MHz. We see that even with all capacitors shorted to ground, the impedance of the power rail above 10 MHz increases above the target impedance (Figure 4 right panel).

The final scheme includes the same number of capacitors as the original design but can achieve significantly lower power rail impedance. Although a complete analysis of the PDN should also include the bulk capacitors connected to the VRM and the on-package decoupling capacitors, their impact will be greatest at lower and higher frequencies, respectively. Here we show the frequency range most relevant to on-board surface mount capacitors. 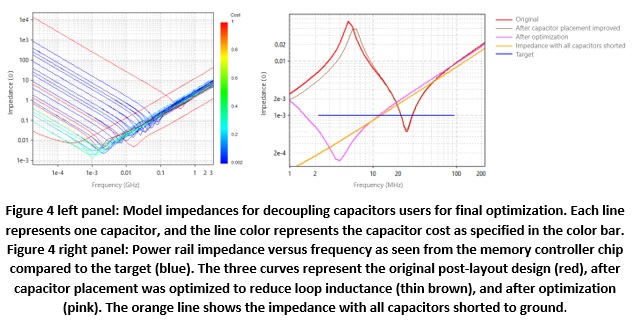 The Myth of Three Capacitor Values