We use IBIS models of drivers all the time in routine simulation. In this project, we compare the predicted results of the IBIS model supplied by the vendor, the results from a generic model, and measured results from a randomly selected part. The agreement to measurements is not within the 10% expected metric but is still remarkably close. We introduce a simple methodology to bring measured data from a scope into the HyperLynx simulation environment. This makes direct comparisons much easier.

The first step in many system designs is to build simple models of critical nets using IBIS models of drivers and transmission line models for interconnects and evaluate performance.  We use these virtual prototypes to explore the impact of routing topologies and termination strategies on the final performance.

There are four important figures of merit of any model that strongly affect the performance of the model in any circuit simulation:

Circuit performance in these virtual prototypes depends strongly on these features, all built into the IBIS model.

Of course, the properties of the board transmission lines such as time delay, characteristic impedance and some metric of loss are also important in any circuit built with these drivers. Generally, the simulation engines to drive these virtual prototype simulations are very accurate. The concern is always about the quality of the models. The only way of validating the quality of a model is by building evaluation vehicles, performing measurements, and comparing the simulation results with the measurements.

We describe a simple evaluation board to measure the properties of a driver and directly compare the scope-measured waveforms with the IBIS predictions.

A simple 4-layer circuit board was designed, fabricated and assembled using an ATXMega64C3 MCU as the controller and an SN74ACT Hex inverter as the part to test. The stack-up was signal and power/gnd/gnd/signal and power. Figure 1 shows an example of the actual assembled board and the circuit layout that is on the outer two layers of the 4-layer board. The two buried layers are both used as ground. 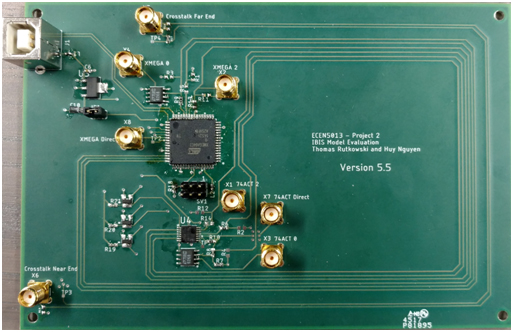 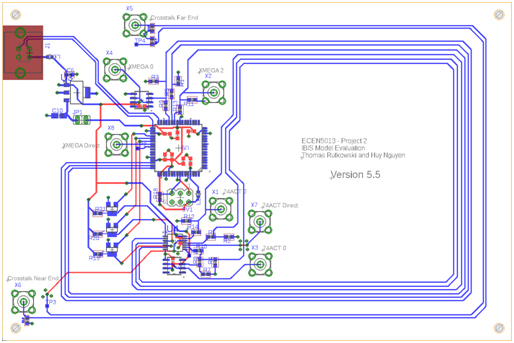 Figure 1. The actual test board (top) and the outer two layers of routing (bottom).

Measurement and simulation set up

Measurements were taken using a Teledyne LeCroy HDO 9104 4 GHz bandwidth oscilloscope, and simulation results were obtained from Mentor Graphics HyperLynx. Figure 2 shows the measurement set up with the board, the power supply, the cables and the scope. 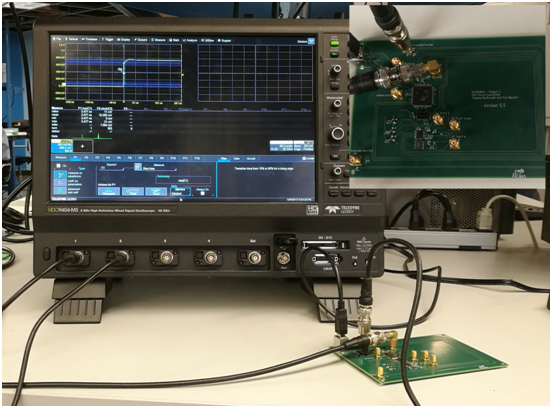 Figure 2.  Lab Equipment Setup with Insert of Evaluation Board

HyperLynx was also used to plot data from both sources, which required modification of the scope’s output files to match the expected format. This was done by exporting a HyperLynx CSV file to serve as a dummy template and copying in the measured data from the scope.

The HyperLynx file format to read a voltage waveform into its plotting tool is in the following format:

The csv output format of a measured scope trace is in the following format:

Time shifting was required for combined plots, as each dataset has a different time T=0 starting point. The scope’s zero point is the trigger instant, while HyperLynx assigns zero to the time the input stimulus is applied to the driver.

To plot measured and simulated data together, a constant offset was applied to each timestamp of the scope data such that the edges were aligned. This method allows for an accurate comparison of the driver’s output characteristics, but neglects the propagation delay. Including the propagation metric requires a more elaborate setup, which is beyond the scope of this paper.

The same hardware and model configuration is used for all case studies. The hardware consists of the PCB-mounted driver IC connected to an oscilloscope with a 42”, 52 Ohm RG58 coax cable. HyperLynx models include the driver, coax transmission line, and a scope model consisting of a capacitor and termination resistor. Figure 3 shows an example of a simulation set up of the driver model, a transmission line and a model for the input of the scope. 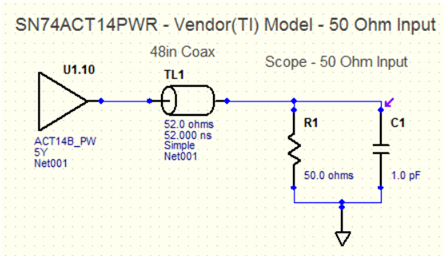 Overview of the Measurements

This study focused on the driver properties. The goal was to extract and compare the three important figures of merit of the driver and to compare the specific waveforms simulated and measured.

Figure 4. Equivalent circuit of the open circuit voltage, the internal output resistance of the driver and the load resistance, provided by the scope.

Case 1: the steady open circuit output voltage from the driver gives the Thevenin voltage. This is measured by using the 1 Meg input to the scope. While the steady state response gives the open circuit voltage, the transient response with its ringing is also a strong test of all the features of the driver, the input model of the scope and the correct modeling of the transmission lines from the board to the driver.

When selecting a model for a part that is made by multiple manufacturers, there is often a choice between a vendor-supplied model and a generic version that is applicable to the entire device family. The first step was to compare the characteristics of the model provided by TI specifically for the SN74ACT14PWR part, with a generic model included with HyperLynx for any driver in the 74ACTXX family.

Since the TI model is unique to that IC, it provides the ability to select the specific output pin (5Y in this case). All three modes were simulated with weak, typical, and strong corner cases with 50 Ohm loads and 1 Meg Ohm outputs. Results from the 50 Ohm comparison are shown in Figure 5 for example. 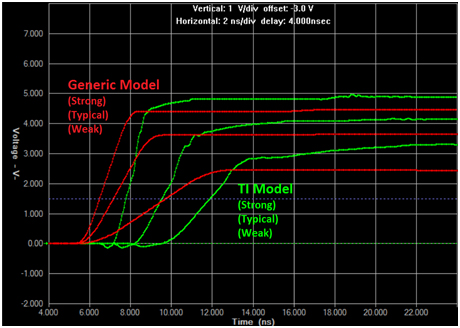 Figure 5. Comparison of TI and Generic IBIS Models with 50 Ohm load to the driver.

The simulations show that the TI model is significantly more complex than the generic HyperLynx model, including a small dip prior to the rising edge and additional high-frequency structures visible along the edges. Table 1 compares the characteristics of rise-time, loaded and unloaded output voltage, and calculated output impedance for both models across all drive strengths.

Vout for both models reflects the range of acceptable VCC levels for the part (5V +-10%). The output impedance of the generic model is higher than the TI model for all corner cases, while the generic rise times are slightly lower. 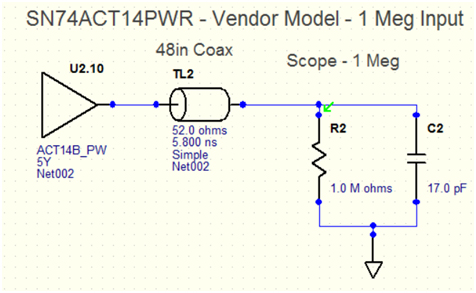 Figure 7 shows the measured scope signal plotted with both HyperLynx models in the typical corner case. The steady state output voltage of 5.00 V is identical for the two models and the measured signal. An external precision 5 V power supply was used to power the driver on the board. 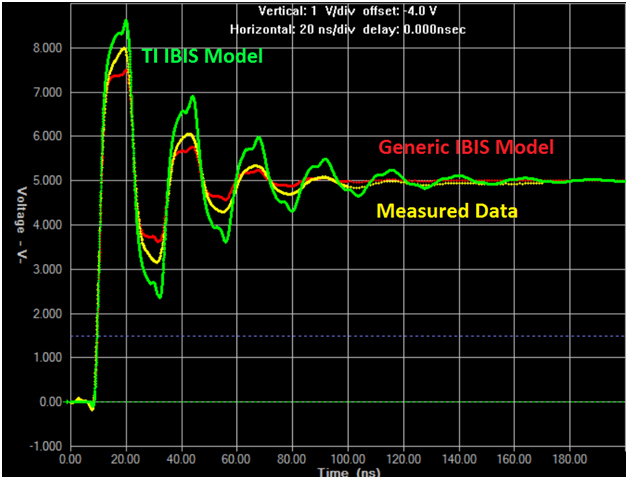 Figure 7. Measured Data vs Models for High-Z Load and Typical corner case using an external precision 5 V power supply to power the board.

Only the typical corner case could be compared since it gave a steady state output voltage of 5.00 V. This is the unloaded, Thevenin voltage of the driver.

The actual scope screen for this measurement is shown in Figure 8, just for comparison with what was processed and imported into the HyperLynx viewer. 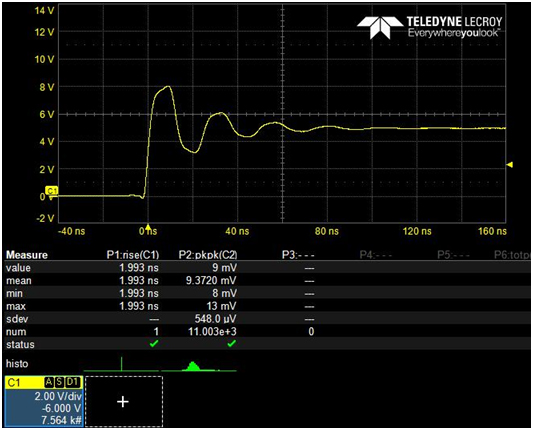 This study examines the actual driver output signal into the 50 Ohm input impedance of the scope acting as a low impedance load. A precision 5.00 V power supply was used to supply the board, matching the typical corner case of both models. Figure 9 shows the measured data plotted with the simulated results from both models with typical corner case. 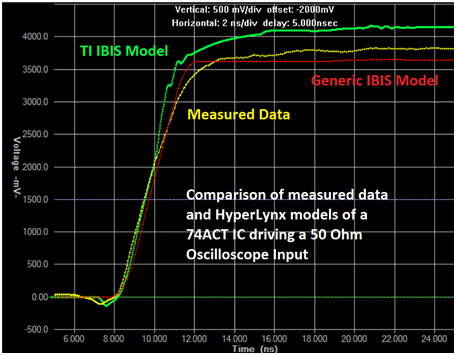 Figure 9. Measured and Simulated Data with 50 Ohm Scope Input as the load.

When driving the 50 Ohm scope input, there are no reflections from the scope so the measured, and simulated, rise time is a direct measure of the rise time of the device under test. The 20-80 rise times of each waveform was extracted using the built-in parameter extraction tool in HyperLynx.

The measured signal has a 10-90 rise-time of 3.6ns and a 20-80 rise-time of 2.4ns. This is a bandwidth of about 100 MHz. The shape of the waveform follows the TI model more closely with its initial dip and greater rounding during the roll-off. The loaded output voltage of the measured data (3.85V) falls between the two, lower than the typical TI model. Since VCC has been kept consistent between the IBIS models and the real board, this is most likely due to variations in the output impedance of real part.

The RG58 coax cable has been measured to have less than -1 dB insertion loss below 2 GHz. The cable would have no effect on this measurement. These are important considerations for any measurement.

Using this simple method of measuring the open circuit response and the response into a 50 Ohm load, the three important figures of merit of the driver’s rising edge performance can be extracted. For the typical corner case, these values are:

We usually expect to see a 10% level of accuracy in a model. The output impedances vary over an 80% range! The measured value is squarely between the TI model and the generic model. This suggests that selecting a source series resistance to terminate a line cannot be better than about +/- 20% accurate.

However, this measurement-simulation comparison applies to this part only, with its very large noise margins. It may be that in other parts the agreement between modeled and measure parts is much tighter.

Even so, it is remarkable that the measured figures of merit of this specific actual, randomly selected component matches so well the simulated values. It falls right between the two models from the vendor and the generic one supplied with HyperLynx.

This project established a methodology to compare measurements with simulations. Going forward, we expect to apply this approach to:

Thomas Rutkowski (M’17) received the B.S. degree in Electrical and Computer Engineering and the M.S. degree in Electrical Engineering from the University of Colorado at Boulder. He is working as a Software Engineer for Ricoh USA in Boulder Colorado, developing custom Linux distributions for soft real-time industrial applications. He had previously worked for Northrop Grumman Remotec in Knoxville, TN as an Embedded Software Engineer for robotic platforms. His interests include the use of Linux in low-latency hard-deadline applications, hybrid microprocessor/FPGA systems, and control systems. He enjoys working with both hardware and software, and all things related to aviation.

Huy Nguyen is a graduate student at the University of Colorado Boulder. His research interests include Signal integrity, RF/Microwave/mm-wave circuits. Outside of work, he is a big fan of playing and watching soccer.

Eric Bogatin is editor at Signal Integrity Journal and the Dean of the Teledyne LeCroy Signal Integrity Academy. Additionally, he is an Adjunct Professor at the University of Colorado - Boulder in the ECEE Dept. Eric improves the signal to noise ratio by sorting through all of the information available and finding the best quality content to publish on signalintegrityjournal.com.

This work was graciously supported in part from grants from Mentor Graphics and Teledyne LeCroy.

Validation of Bend Models with Measurements