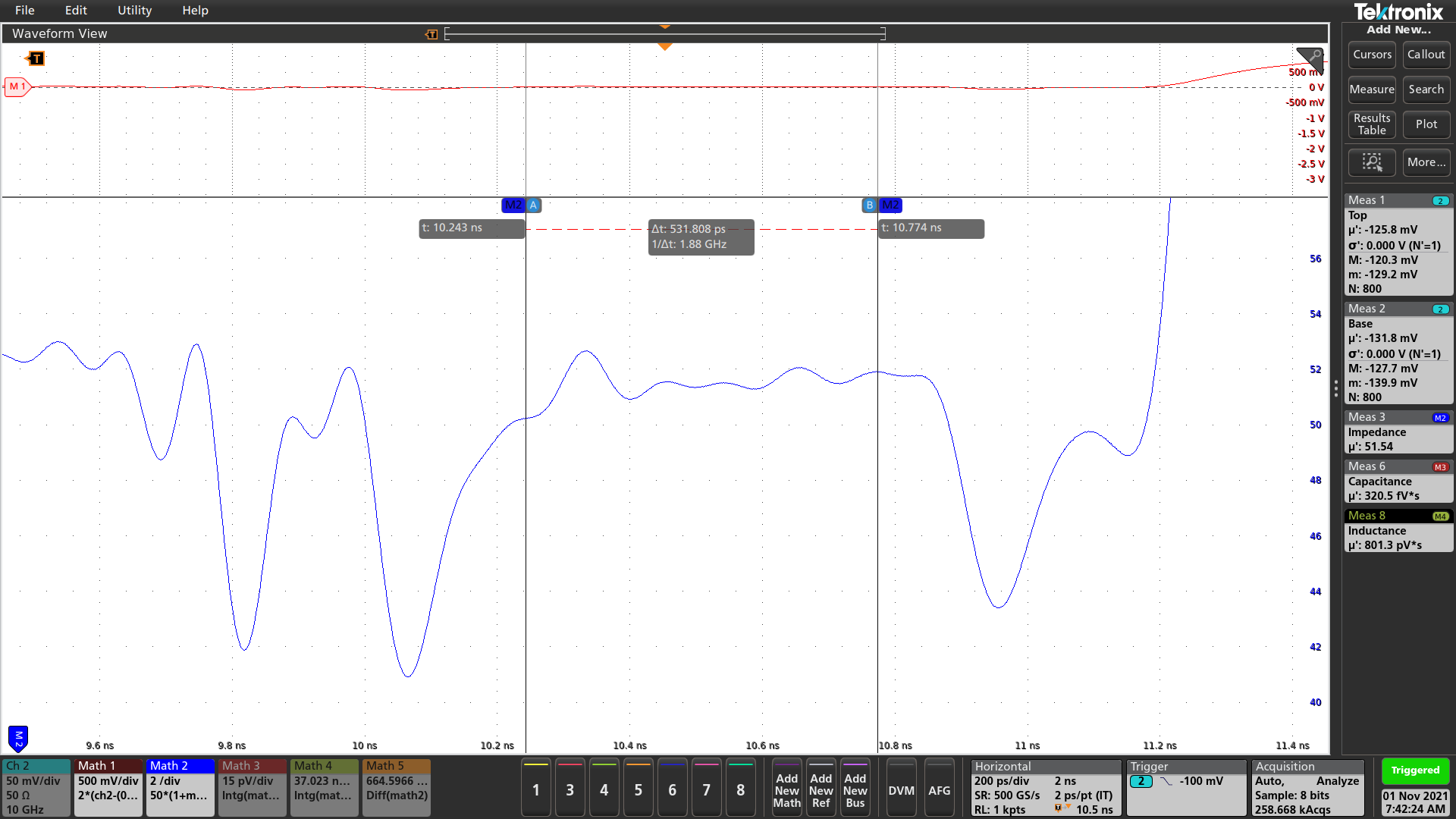 Fig. 10 - TDR impedance measurement of demo board TP5 Trace with the P2105A probe.

With reference to EQ(5), and the measured result in Figure 8 with the P2105A probe, we can calculate the demo board’s Dkeff to be:

If you recall, the Dkeff value shown by EQ(11) is within 5.1% of what we simulated using the ADS tool, and within 6.74% of the value calculated using Rogers MWI calculator. Again pointing to the fact that the specified values for bulk dielectric constants include uncertainty which varies based on copper thickness, roughness, laminate thickness variation, and PCB manufacturing tolerances. Keep in mind that simulators are ideal calculations and do not contain the same noise as a real-world measurement. The correlation between ADS and the measurement could be further improved if copper roughness was included in the ADS simulation. In addition, as previously discussed, the RO4003C laminate thickness can allow for up to a 12% variation in thickness.

We can use a method from [10] to approximate the bulk dielectric constant, as shown in EQ(12) and EQ(13). Where EQ(12) calculates a correction factor (a), using the trace width (w) and the dielectric thickness (h).

Using the correction factor, the bulk dielectric can be calculated using EQ(13):

With reference to EQ(12) as well as EQ(13) and the result shown in EQ(11), we can solve for the bulk dielectric constant Dk based on the TDR measurement as shown in EQ(14).

The Rogers R04003C datasheet, for typical Dk value of 3.38, specifies a max Dk tolerance of 1.47% (Dk +/-0.05). Assuming this tolerance is valid towards the bulk Dk, let’s then assume our laminate is at the high end of the specified tolerance. If we compare the maximum tolerance case laminate value (3.86) to our measured value (3.95), then our result is within 2.36% of the Rogers Design Dk. The remaining error is likely due to manufacturing tolerances that occurred as a result of the slightly different pressed laminate thickness, copper roughness, and the material laminate characterization testing method.

Let’s quickly discuss why the Rogers bulk Design Dk could be reported lower than our measurement. It is very common for laminate vendors like Rogers to use a Clamped Stripline Resonator Test per IPC-TM-650 2.5.5.5 for material characterization [12]. In fact, the R04003C datasheet specifies this test method for this laminate’s characterization. However, when using this the testing method, sometimes entrapped air will cause the test to report a lower Dk.

Table 1 provides a summary of the results discussed, including the time delay per unit length (TD/inch) which can be calculated with reference to EQ(3). 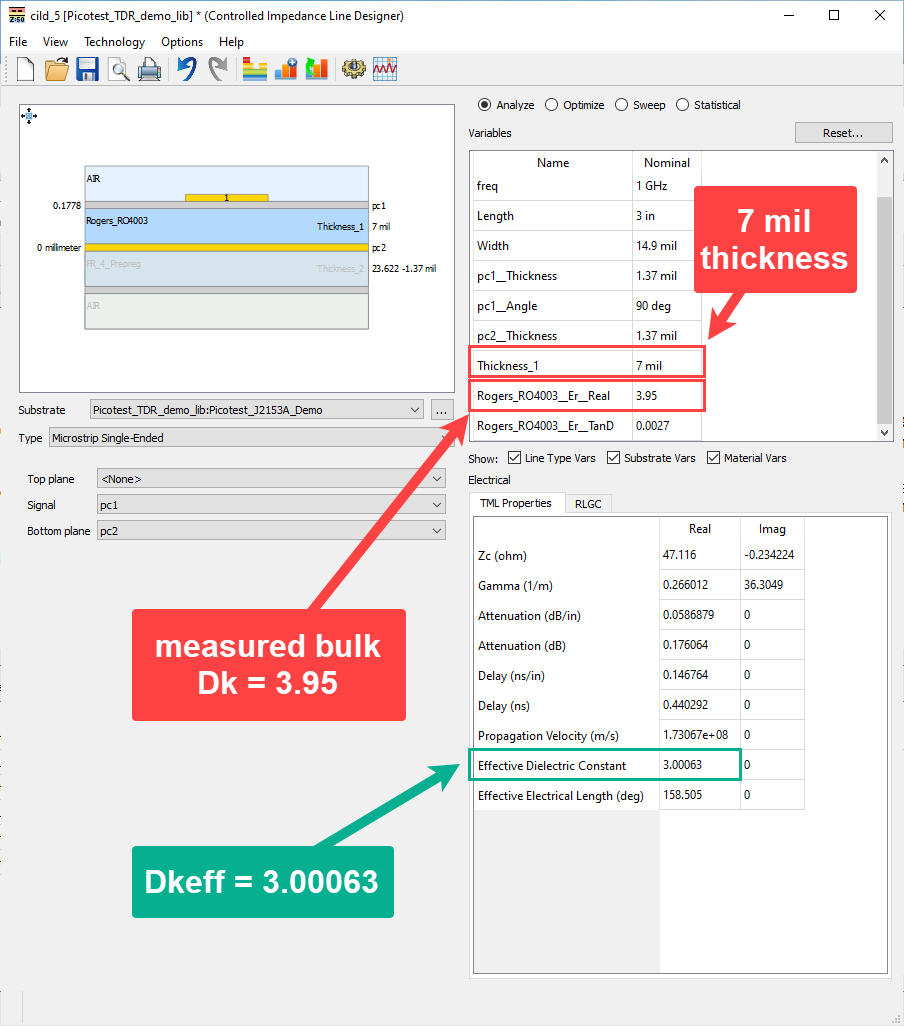 Lastly, we had a sample of the 50 TDR demo boards tested by the fabricator.  With reference to Figure 12, the first row is trace 1 impedance, measured on 5 of the 50 demo boards.  The second row is the measurement of the differential coplanar traces, which are 50Ω single ended and 100Ω differential.   Interestingly, the spread of the five, 50Ω measurements, is +/-4.86% and the spread of the differential trace is 2.8%.  The trace isn’t particularly narrow at 15 mils, so we suspect this is mostly the tolerance of the material.  It is just one double sided laminate.  The smaller variation of the differential traces suggests that this is random tolerance. Two side by side 50Ω traces, if they have random tolerances would be a factor of square root of two better than a single trace, as this seems to indicate.

Of course this test data is a random sampling of one trace on five of the 50 produced boards.  We measured one of the 50 random boards for this article, so extrapolating the expected tolerance using double sided standard deviation, the 4.9% seems quite reasonable, and likely largely dominated by the laminate.

All of this further emphasizes the point of the laminate’s datasheet uncertainty and the importance of using a measurement to further improve the fidelity in your design. 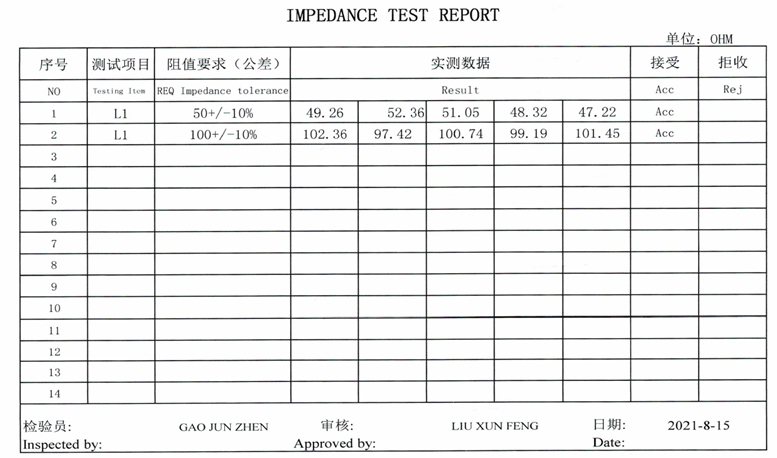 To wrap up our analysis, it is important to note that the TDR demo board does not use a solder mask. The results will be further impacted when a solder mask is applied over the microstrip, since field lines will pass through the dielectric, air, and the solder mask. In addition, solder mask increases dielectric loss.

As discussed earlier, since the trace measured on the TDR demo board is a microstrip, the results shown by EQ(11) do not represent the bulk dielectric constant. However, the result shown by EQ(14) does represent an approximated value for the bulk dielectric constant, which is shown to be within a reasonable tolerance to the datasheet value for Rogers RO4003C. As shown in this article, we can convert the measured effective dielectric constant into the bulk laminate dielectric constant. This method was also confirmed using a 2D field solver. These methods demonstrated good correlation from simulation to measurement for impedance of a transmission line. Despite the good correlation, we have shown that there are many tolerances that impact the results, and that a five sample measurement resulted in a 4.9% tolerance.  A double-sided interval with reasonable confidence would be much larger. This further emphasizes the importance of verifying these results with a measurement such as a TDR and explains the significant cost increase for tighter tolerance impedance control.