Home » Blogs » For Good Measure » Test Your TDR with a DMM

Test Your TDR with a DMM

A TDR (time domain reflectometer) is an instrument that probably has the fastest rise time of any instrument in your lab, yet you can test its accuracy using a DC Ohmmeter.

What the TDR Measures

In all high-speed channels, reflections are bad. We try to engineer a channel to reduce the reflections, which all contribute to inter-symbol interference (ISI).

But in a TDR, reflections are our friend. We use the reflections of a signal when it encounters a change in the instantaneous impedance as the basis of operation of the instrument. The TDR also leverages the finite propagation speed of the signal. This transforms the location of the discontinuity into a time delay of when the reflection is measured at the source.

There are two important elements in a TDR instrument: a very fast step edge generator and a sampling scope to measure the voltage near the launch of the signal. Figure 1 shows how of these two elements are used to transmit and measure the reflections from a device under test (DUT).

The fast edge is launched into the DUT and propagates down the length of the interconnect. Wherever the edge encounters a change in the instantaneous impedance, a reflected signal is created, propagating in the backward direction toward the source. It is detected when the reflected edge makes its way back to the sampling scope. The magnitude of the reflection and when it is measured encode the information about the magnitude of the impedance change and its location.

From the signal’s perspective, it doesn’t matter what physical structure creates the change in instantaneous impedance. It could be from a change in geometry of a transmission line, and it can also be a discrete resistor in series or in shunt.

A TDR is sensitive to series resistance and shunt resistance

The impact of a small series resistance is to create an offset in the distributed impedance of the transmission line. This can arise, for example, when there is contact resistance in the connector due to a dirty connector or a loose connection.

The signal cannot tell the difference between the instantaneous impedance of a uniform 50 Ohm transmission line and a 50 Ohm resistor between the signal and return at the end of the line. Figure 3 shows the TDR response from two structures; one is a 50 Ohm transmission line and one is a 50 Ohm shunt resistor. Both are engineered with small discontinues at the launch. It is only by waiting to see the reflection from the open at the end of the coax cable that you can tell which is which. 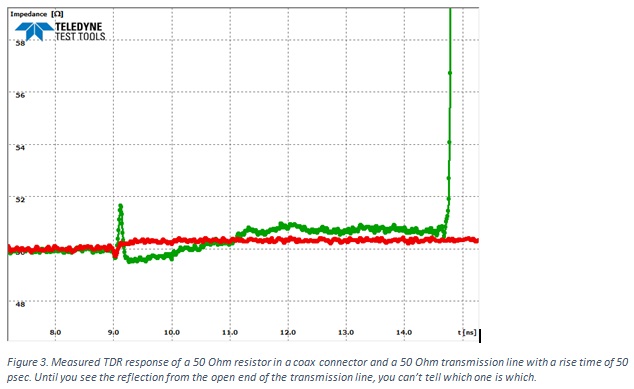 The instantaneous impedance of a resistor in parallel with an open is its resistance. In principle, if we measure the TDR response of a discrete shunt resistor, we should see just the resistance of the resistor.

In practice, the connection of the discrete resistor to a coaxial connector, like an SMA, will always result in a large discontinuity. Due to the long leads, the discontinuity will always be high, looking like an inductive discontinuity. An example of the measured TDR response from a 50 Ohm axial lead resistor soldered on an SMA connector is shown in Figure 4. 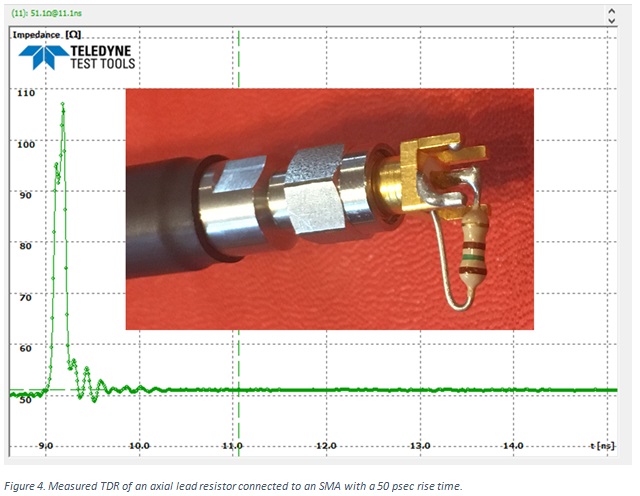 We can model the connection as a short, high impedance, uniform transmission line, with the 50 Ohm SMA on one side and the resistor on the other. If the short discontinuity is lossless, there will be reflections from the front end and back end of the discontinuity. And, the reflection from the back end will rattle around inside the discontinuity, reflecting off of each end.

If we wait long enough (roughly 5 round trip times) for all the reflections to die out, we will see the net reflection from the change of impedance between the 50 Ohm of the source and the resistance of the discrete resistor. This principle can be illustrated in a simple simulation. Figure 5 shows the simulated TDR response from a 0.1 nsec long 200 Ohm transmission line in series with a 75 Ohm ideal resistor. The rise time is 35 psec. 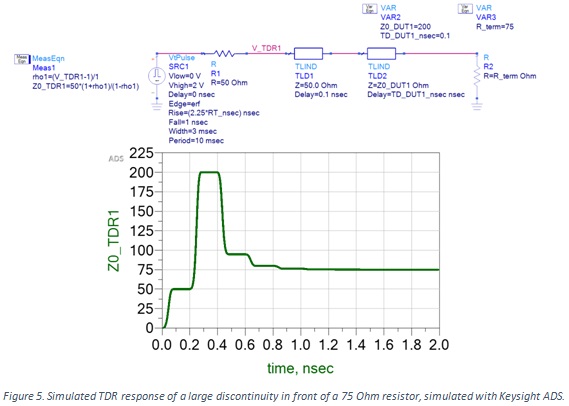 This suggests a powerful way of testing the accuracy of a TDR using discrete resistors.

Verifying the accuracy of a TDR with Resistors

I took a selection of axial lead, ¼ watt carbon resistors with values of roughly 10 Ohm, 30 Ohm, 50 Ohm, 70 Ohm, 100 Ohms, 150 Ohms and 330 Ohms, and soldered them to SMA connectors. I was not trying to engineer a low launch discontinuity. I measured the resistance between the signal pin and outer shield of the SMA with a Keithley 196 System DMM, which has a NIST traceable absolute accuracy of 0.1% in resistance. I was careful to eliminate the artifact of the 0.3 Ohm series resistance of the test leads.

Generally, it is difficult to reduce the contact resistance to less than 0.1 Ohms, which contributes an error at the 1% level for the 10 Ohm resistor.

When I measured these SMA mounted resistors with my TDR, I measured the responses shown in Figure 6. In this example I used a 50 psec rise time.

While they each have a very large discontinuity at the launch, if we wait for these initial reflections to die down, the final, long time impedance as measured by the TDR is very close to what is measured with the DMM. Here is a summary of the differences between the DC DMM Ohmmeter measurements and the 35 psec TDR measurements:

Near 50 Ohms, the absolute accuracy is less than 1%.

If you want confidence in the accuracy of your TDR, it’s easy to build a few samples of resistors, measure their resistance with a TDR and compare to their DC resistance. As long as you wait long enough for all the launch discontinuities to die out, you should measure the same resistance with the DMM as with the TDR. This is a test of the calibration accuracy of your TDR. It is one step every TDR user should take to gain confidence in the accuracy of the instrument.