The foundation of Dk

Many methods have been introduced to measure the Dk of a laminate layer, ranging from the insertion loss of 2-line lengths, the Delta L method, resonant stub structures, or even cavity resonant methods. They all provide the capability to extract the frequency dependence of the Dk for specific laminate layers. But they all involve VNA measurements with sometimes sophisticated simulation and analysis techniques or proprietary software. This can be a barrier to a quick or routine measurement.

Sometimes “an OK answer NOW! is better than a good answer late.” If all you need is a value of the Dk to verify a vendor’s specs, or a value to put into a 2D field solver there is a quick and simple way of measuring the Dk with a time domain reflectometer (TDR).

Fundamentally, we just need to measure the time delay, TD, of a fixed length interconnect, Len. The Dk is then given by

Even with a uniform transmission line structure to measure, the challenge is then measuring the time delay and the length accurately. There are three simple approaches to this problem: 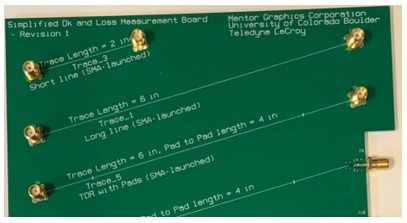 Figure 1. Example of a test board with three stripline transmission lines, demonstrated the three methods. Note they are rotated at 15 degrees to the glass weave axis to average the glass weave distribution.
(This board was designed and developed by the authors as part of a joint Mentor Graphics, Teledyne LeCroy, and University of Colorado, Boulder collaboration. It will be used in following sections to compare three options. The instrument used for all the measurements is a Teledyne Test Tools T3SP15D TDR.)
Measuring Dk, Method 1: Guess the location of the ends of the line
A TDR has a time resolution to measure the round-trip time delay position of a feature, on the order of a small fraction of its rise time. This can be a resolution on the order of 10 psec, depending on the TDR.

When we guess the time delay between reflections from features, there is some uncertainty about where the launch ends and the uniform line begins. There can be as much as 0.05 nsec uncertainty. When the total time delay of the line is 1 nsec, this is potentially a 5 percent impact on the time delay.

For example, Figure 2 shows the measured TDR response of a nominally uniform stripline transmission line with two through-hole SMA launches on the ends, separated by 6 in. It is measured from both ends. The launches are nearly identical, and there is a small impedance variation down the line. The characteristic impedance of this line is about 65 Ohms. 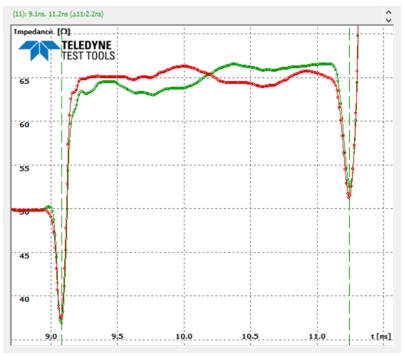 Figure 2. Measured TDR response of a 6 inch long stripline transmission line with SMA launches on the ends, measured from both ends. The TDR rise time was 65 psec.
Using cursors, the round-trip time delay between the dips of the connector launch is measured as 2.16 nsec. This makes the one-way time delay 1.08 nsec. There is some uncertainty of where the beginning of the trace is, where the launch ends, and how much additional delay the launch contributions. This is inherent in this method.

The extracted Dk is

This is the composite bulk dielectric constant of the two layers that make up the laminate material surrounding the stripline trace and between the two planes. If we assume the Dk of each layer is the same, then the bulk Dk for this laminate, composed of glass yarn and resin, is 4.51.

The second method to measure the Dk is to use two different length, but otherwise identical, transmission lines. If they have the same launches, then the difference in time delay between them should be due only to their difference in length.

It is only necessary to use the same feature on each line to determine a round-trip delay time. The difference between the delay in these two lines for the same structure is what is important.

The measured TDR response from a 2-inch long and 6-inch long transmission line is shown in Figure 3. The launches from the ends of the lines are seen to be very similar. This is an important consistency test. 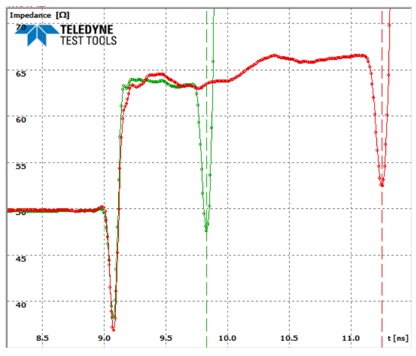 Figure 3. Measured TDR response from two identical stripline transmission lines with different lengths. The TDR rise time was 65 psec.
The round-trip time delay difference measured by the cursors between the ends of the launch discontinuity, which is a very sharp feature, is 1.42 nsec. The one-way time delay value is 0.71 nsec, for the 4-inch difference in length.

The effective Dk extracted is:

This is the effective Dk for the two layers which make up the stripline structure.

The discontinuities should be far enough away from the launches to clearly see the peaks. This should be at least 2 x RT. In this specific TDR with a 65 psec rise time, this is a 130 psec delay, or 0.8 in.

The discontinuities can be narrower regions, creating a high impedance, or wider regions, making a lower impedance. It is only necessary that they be visible as a peak or a dip. They should have a length significantly shorter than the TDR resolution so that the peak width is based on the TDR rise time, not the length of the discontinuity.

The resolution of the TDR, with a 65 psec rise time is

A much shorter structure with a large impedance change is preferred. It will result in a well-defined dip or peak.

In the test structure fabricated, the length of the extra pad was chosen as 0.05 in. which is ¼ the spatial resolution of 0.4 in. The width of the pad was chosen as 18 mils, which is 3x the nominal line width. Figure 4 shows the artwork for the signal layer with the through-hole SMA launch and the first small discontinuity.

Figure 4. Artwork for the signal line in a stripline with a through-hole SMA launch and a small discontinuity reference pad exactly 1 inch from the launch.
With these conditions, the dips are very clear and easily measured. Figure 5 shows the measured TDR response of this structure. 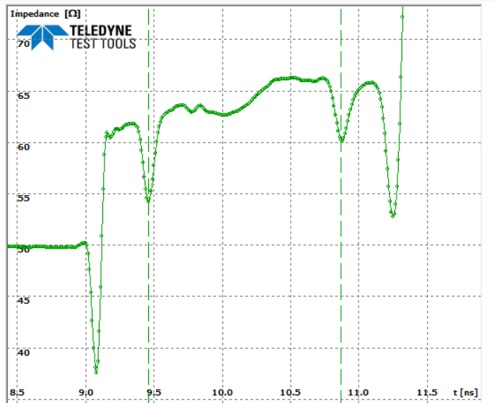 Figure 5. Measured TDR response of one transmission line with 2 small pads located 4 in. apart. The TDR rise time is 65 psec.
The measured round-trip delay between the centers of these dips is 1.42 nsec. The one-way delay time is 0.71 nsec. This is identical to, within the ±10 psec resolution of the TDR, as measured by the two different line length method. The extracted Dk is the same value:

It should be noted that the two line method and the single line with precision discontinuities, both give the same value of the effective Dk, 4.39.

But the guess method results in a Dk of 4.51. This is higher by 2.7 percent. In the measurement of the single line method, to get the lower value of Dk as measured in the other methods, would have required a shorter measured time delay.

If better accuracy than 5 percent is required, the two line or the one-line-two-discontinuity method should be used.

Of course, the Dk measured is the effective Dk of the composite structure composed of the two laminate layers above and below the signal line. Extracting the Dk of each layer would require other specialized structures.