Editor's Note: This is a summary of a much longer treatment on this topic, which can be accessed at this PDF link.

In a perfect world, I’d like to be 6 ft. tall, smart, and handsome; unfortunately, as my wife can attest, I do not meet any of those conditions. The same happens with S-parameters in signal integrity. For the most part (not always) when we see a smooth curve, nicely behaved without ripples in the frequency domain we feel the world is safe. On the other hand, when we see weird resonant stuff or big dips/peaks in S-parameters, we are left wondering and asking ourselves: what is going on? (with a few adjectives in between).

Let’s take a quick look at Figure 1. I’ll venture to say the blue curve is a thing of beauty, but the red jagged curve is awful. As you might have guessed, the blue curve is a nice transmission line, the red curve is the same length line with some half-wave resonances superimposed on them. We’ll come back to this later. 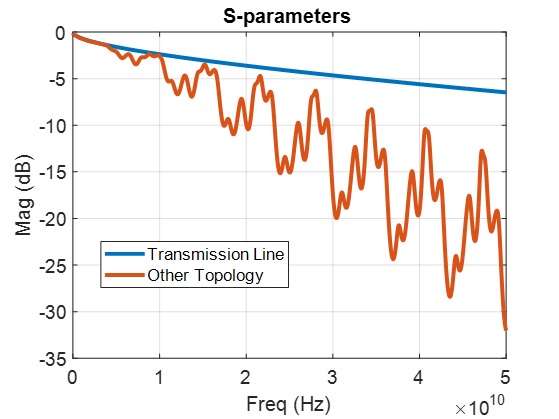 Over the years I’ve come to realize that, particularly in signal integrity, half-wave resonances are often the cause of ugly S-parameters. You can argue that any type of resonance would cause problems, and you would be right. However, half-wave resonances are easily formed in topologies (as will become evident later), so let’s take a look at what conditions are necessary for them to develop.

Perhaps the easiest way to explain the condition necessary for a half-wave resonance to develop is through the illustration in Figure 2. Imagine two kids swinging a rope. Close to their hands, they will need to move the rope a little in order to excite it so that it swings up and down. In between the kids, right at the center, the rope will swing the most, reaching its peak. In this analogy, imagine the rope to be an envelope of any other oscillation that can occur, but never outside that envelope.

You immediately realize the rope has a shape that resembles half of a full waveform, or in other words, the full waveform will need a distance equal to two times the distance between the kids.

As you see in Figure 2, the circuit analogy is evident. We represent the distance between the kids as our transmission line. The fact the kids have a hand that almost doesn’t move, as the termination at each end, and the ports P1 and P2 as the source, or the force the kids are using to move the rope. You see, it does not matter how much the rope will want to swing at the kid hands, it will not be able to, since the kids are pulling it, holding it steady. At the center of the rope the situation is very different; the rope is free to move as much as it wants.

In summary, for a half-wave resonance to occur we need the following conditions to occur:

In the example above, the terminations are

, and the transmission line characteristic impedance is

. It is important to understand that in circuits, half-wave resonances can be developed with exactly the opposite condition as well, meaning with

. A similar half-wave resonance will occur but with maximum at the ends and minimum at the center.

Now that we know the conditions required for a half-wave resonance to develop I want to come back to a previous point made. Why are they so common in signal integrity topologies?

One way to imagine SI topologies generically is to think of them as some sort of uniform baseband transmission framework that is populated with different components (see Figure 3). Anything could constitute a component, from DC blocking caps to all kinds of connectors, cables etc. Usually when we attach these components to the baseband topology, the attachment at each end is approximately the same, producing similar discontinuities. If we consider that most elements/components have some sort of intrinsic delay or electrical length, we realize we perfectly meet the conditions for a half-wave resonance to occur and that is why, just the simple act of placing elements along interconnects promotes half-wave resonances.

You might be quick to think: "If every single time I need to create a complex topology, I’ll have these pesky half-wave resonances, I am doomed!” Well, yes and no. As you might imagine, like everything in SI there are ways to minimize it, and the extent you’ll see these resonances will vary depending on several conditions. We will come back to this a bit later.

Let’s go back to Figure 1 and analyze the jagged line more. Figure 4 is the magnified version of this where we can identify two resonances. We see a lower frequency resonance

repetition, and a high frequency resonance

repetition. ( I know, I am calling

to a lower frequency than

has less number of repetitions per unit than 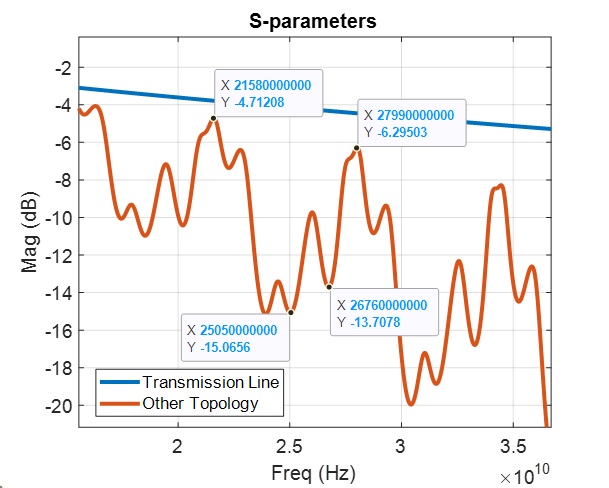 By recalling our jumping-rope kid example, we concluded the resonance formed is a half-wave resonance. (This means that the full wave would be two times the distance between the kids.) In the circuit world, we are going to replace the word distance by electrical length, and mathematically we can convert the resonance frequency measured to distance as follows:

If we know approximately the transmission line propagation delay, that in our case is

then just by simply looking at the frequency domain we can calculate the approximate length between discontinuities.

In essence just by looking at the frequency domain S-parameters, if we assume we have only ½ wave resonances we could estimate there should be two sets of discontinuities, one set separated by

and another set separated by approximately

Figure 5 shows the mystery topology that produced the red curve shown before.  As you can see this is a simplified behavioral topology with transmission lines with different lengths but with the same characteristic impedance of

and per unit length propagation delay of

Also, the topology has lumped elements that could represent the attachment discontinuities for different components.

This topology is very simple just to illustrate the point, but please note the exact same behavior will happen on more complex topologies. For example, something very similar to the

connector attached at both ends with vias not properly tuned.

Ultimately just by analyzing the frequency domain, we were able to correctly identify the strongest of the resonances

resonance is coming from another type of resonance called a ¼ wave resonance and topic for a future article. We notice the interaction between the two inductors (same type of discontinuity) is not readily seen or it’s heavily masked and attenuated by the other bigger resonances.

The main point is that armed with this knowledge and using a very simple formula, we could attempt to track and minimize resonances.

But wait a second, so far, we have discussed how to identify half-wave resonances in our circuit which is part of the battle, but we have said nothing about how to minimize them.

There are two fundamental ways to minimize these resonances:

To illustrate this point, I’ll cheat and use a

transmission line topology, but I’ll calculate the S-parameters with 40

renormalization impedance as shown in Figure 6.

Using a different renormalization impedance from the transmission line

A deeper discussion of using S-parameter renormalization impedances to our advantage can be found in a previous article, “S-Parameter Renormalization, the Art of Cheating” [1].

As mentioned before, increasing losses would tend to minimize the effect of these resonances.

We can envision two ways to increase losses, either by changing the medium (such as by changing loss tangent) or by increasing the length of our

transmission line as shown in Figure 6.

we see two effects: dampened attenuation and resonance frequency change as the separation between discontinuities increases.

When visually observing the right side of Figure 7

certainly appears to be a lower frequency than

so why am I saying

This is a common point of confusion for engineers. Please note we are measuring a frequency on a frequency axis, in essence it is the frequency of a frequency (this is called a Cepstrum) and that is why it is confusing. To unconfuse yourself, just measure the frequency value on consecutive peaks, and subtract. This has been shown previously in this article when referring to Figure 4 . When you do that, you’ll see that indeed

Let’s move on to the most obvious way to minimize these half-wave resonances. 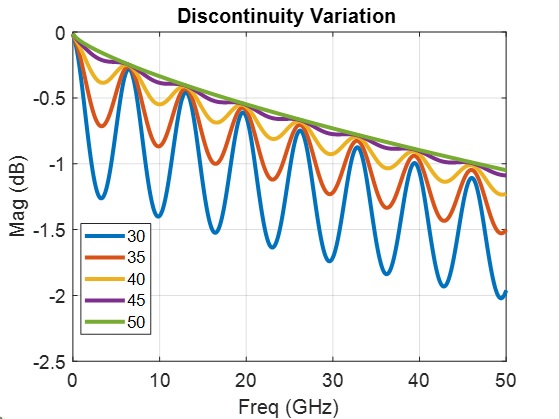 In Figure 8 we are using the same topology presented in Figure 6, and, by changing the S-parameters renormalization impedance

there are no reflections and the half-wave resonance disappears.

I believe it is important for the SI engineer to be able to fully understand, identify, and address these resonances in different topologies, so in addition to the short summary above, for the curious engineer and stout of heart, I have created a complete study of half-wave resonances in the frequency and time domain, with several practical examples and important derivations that can be accessed through this pdf link.