How to Stop Your Differential Vias from Leaking For signal traces, a via is a structure in a PCB or package substrate that allows for the transfer of signals in a vertical manner from one layer to another. A typical via structure used for differential signals is depicted in Figure 1. The structure consists of two signal vias and two return path vias that are connected in the following order: Return via – Signal P – Signal N – Return via – where the return vias are usually connected to GND planes.

Figure 1: G-S-S-G via structure: (a) with all planes in the stackup (b) display only with the external planes (c) 16 layers stackup

The signal vias depicted in Figure 1 pass from layer 1 (top) to layer 16 (bottom) in a stackup structure with 16 layers: see Figure 1(c). The differential impedance of the input and output traces are 90 ohms and the traces' length is 50 mil. The dimensions of the via structure (drills, anti-pad size and shape) have been designed for a via impedance of approximately 90 Ohms for a 40 mil signal vias pitch. The differential port impedance for the S parameters is also 90 Ohms.

The total losses in the system consist of: (1) conductor loss (including surface roughness) (2) dielectric loss (3) radiation loss into the cavity. When the signal passes in the via and current flows in it, according to Maxwell’s equations, the via will radiate an electromagnetic wave that will propagate radially between the planes in the layers in which the via passes. We will write the components of the total losses in equation (4):

where nC, nD and nrad describe the percentage of the input power that is lost as a result of conductor loss, dielectric loss and radiation loss into the cavity, respectively.

The task now is to isolate the radiation loss nrad and investigate the frequency from which the via structure G-S-S-G starts to radiate significantly into the PCB. In order to do this, we will examine the via structure described in Figure 1 in a model with lossless materials too. To do this, we change all the metals from copper to a perfect electric conductor (PEC) and eliminate the surface roughness in order to zero out the conductor loss (nC = 0 ). Then, we set Df=0  in order to zero out the dielectric loss (nD = 0). Next, we define the simulation model’s boundaries to be of absorbing boundaries type. Above 30 GHz, the radiation losses begin to increase substantially. Radiation of vias into the cavity cause a number of very significant signal and power integrity (SIPI) problems: (1) a significant increase in differential insertion loss of the signal, with all resulting implications (2) an increase of cross talk between signals (3) increase of the ISI because in a real PCB, the radiation is reflected from the PCB boundaries (4) increased ground and power supplies noise (5) increase in jitter of signals transmitted from components that are connected to these supplies.

In Figure 2, in the example of the G-S-S-G via structure, we see that fC.R is approximately 30 GHz. At a frequency of 50 GHz, for example, more than half (55%) of the power of the differential signal is lost as a result of radiation of the vias to the PCB. The green line depicts the percentage of the power that is dissipated as a result of the losses by frequency, using the model with low loss materials (as detailed above).

This is the place to state that when we completely zero out the losses in the model, the model is very sensitive to resonances that might be developed in it because there is nothing to damp the resonances. This will manifest in non-smooth S parameter results with sharp peaks and dips. Therefore, in practical terms, it is still worth adding some losses to the model even when we are examining radiation losses.

The red line in Figure 2 describes the percentage of the power that dissipates as a result of the losses by frequency when the model is with high loss materials. Here too, one cannot know from the graph exactly what percentage is wasted for each loss. One may see that up to a frequency of 30 GHz, the losses increase at a fixed rate of 0.667 %/GHz, and had significant radiation from the vias not started, this rate would have been kept constant. Because the vias start to radiate significantly from 30 GHz, the loss rate increases substantially.

After showing a method for simulation and calculation of radiation losses from a via structure and the extensive, significant effect that this radiation has on SIPI, we will now examine the two main factors affecting radiation from a via structure: (1) coupling between the signal vias (2) the quantity and location of the return vias. 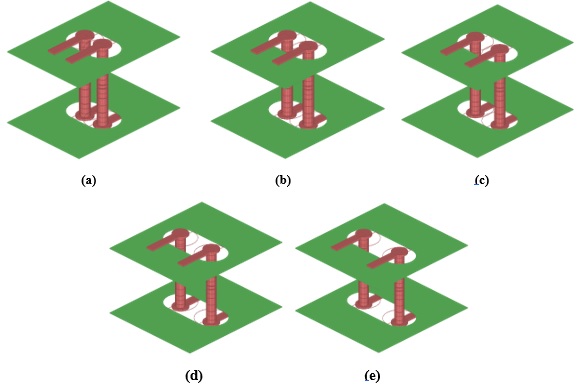 Note: for the sake of convenience of viewing, only the external planes of the stackup are shown

The calculations of nrad from the simulations’ S parameter results of the five via structures from Figure 3 (with lossless materials) are shown in Figure 4. 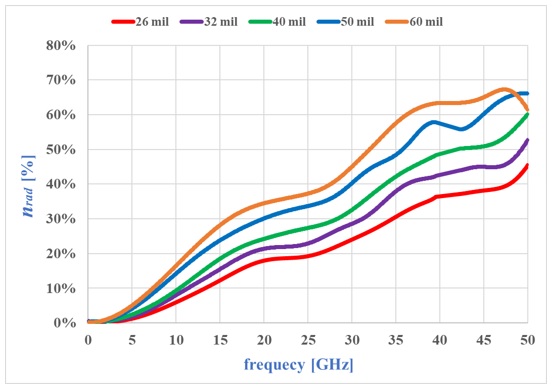 To examine the effect of the quantity of return vias on the radiation losses, we use the via structure in Figure 1, with the signal vias pitch fixed at 40 mil. We next examine four structures with a different number of return vias: 0, 2, 6, and 8 as depicted in Figure 5.

Note: for the sake of convenience of viewing, only the external planes of the stackup are shown

The calculations of nrad from the simulations’ S parameter results of the four via structures from Figure 5 (with lossless materials) are shown in Figure 6. 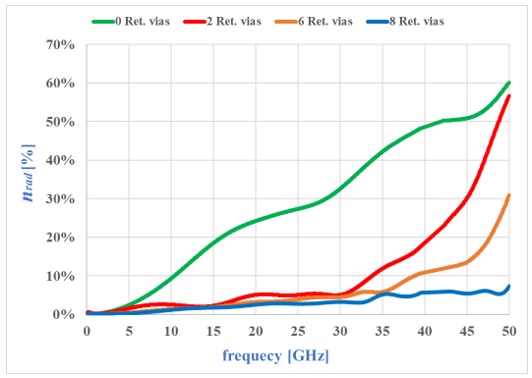 The addition of return vias around the signal vias is a kind of addition of shielding to the structure and contributes to reducing of radiation into the PCB. It should be noted that to reduce the radiation losses, we will have to take care to position the return vias around the signal vias in order to form effective shielding. Of course, should we wish to maintain low radiation losses at high frequencies (shorter wavelengths), we will have to add more return vias and maintain a smaller distance between them of not more than 1/10 of the wavelength.

In conclusion, the use of a differential via structure beyond its radiation cutoff frequency fC.R will result in significant radiation into the cavity and many SIPI problems. The radiation losses will result in a decrease in SDD21, but this will not necessarily happen at fC.R frequency because SDD21 is also affected by the amount of reflections, mode conversion, and the other losses. Therefore, it is not always possible to find fC.R directly from SDD21.

Of course, at the end, the overall geometry of the via structure will determine the via impedance, the return loss, insertion loss, and the radiation into the cavity, but one may still see here, albeit roughly, the connection between the number of return vias and the radiation cutoff frequency of the differential via. As we know, the first role of return vias in a differential via structure is to apply a return path with low AC impedance for the return current of the common signal that exists in a practical differential signal. We now also see their second role, which is to reduce the radiation into the cavity of differential signal passes the vias and minimize the resulting SIPI problems, thus allowing the use of differential vias at higher frequencies.

How to Reduce Attenuation in a Differential Channel