Will McCaffrey, Northrop Grumman
No Comments The Voltage Regulator Modules (VRMs) are a vital part of any hardware design and critical to system-level power integrity analysis. When available, VRM models provided by the vendors offer a reasonable starting point for a power integrity design analysis, assuming the model properly represents the output impedance. However, these should not be used for design sign-off. The resistor-inductor (R-L) model is typically the most common SPICE representation for the ideal VRM small-signal passive model. Ideal VRM models in SPICE can sometimes provide reasonable first-order approximations for circuit behavior [1]. However, there should be caution in using these models without verification by making measurements. R-L models only include one of six noise sources in a VRM, the output self-impedance. The input self-impedance, power supply rejection ratio, reverse transfer, input noise current, and output noise current are all important sources of noise that are missed in an R-L model. [2] Furthermore, the small-signal passive model also gives up the dynamic impedance of the VRM due to changes in the load step current.

In this paper, the Analog Devices Inc. (ADI) LTM4650A micro-module with an internal inductor [3] is examined, comparing the generated small-signal passive model from LTpowerCAD [4] to a measured model using the LTM4650A evaluation board. This evaluation board, the DC2603A-A, contains a single LTM4650A with either a single phase or dual phase output configuration. In this measurement, the LTM4650A has two separate outputs (single-phase), with the measured output of one phase set to 1.5V. The LTpowerCAD schematic of the evaluation board is shown in Figure 1.

The setup shown in Figure 1 was used to generate the output impedance result shown in Figure 2. This setup also reflects the changes made to the LTM4650A EVAL (DC2603A-A) to remove a 100uF, 1210 package size capacitor, which was necessary to allow a probe point with the Picotest P2102A-1x 2-port probe [5]. 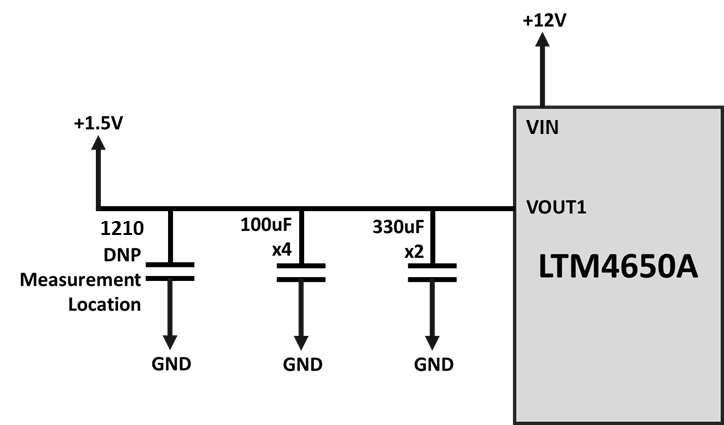 Figure 2 shows the output impedance plot from LTpowerCAD over the frequency range of 5Hz to 50MHz. The peak impedance value is 10mΩ at 9.988kHz. Additionally, the low-frequency impedance decreases significantly as the frequency decreases, reaching approximately 118uΩ at 100Hz.

As shown by the output impedance results in Figure 2, there appears to be a linear approximation of the VRM at a low frequency from 5 Hz to 1kHz. This would indicate a sub-100 uOhm impedance that includes Rdson and DCR of the internal inductor and the non-linear elements of the control loop. The control loop parameters of Vramp, the sawtooth voltage ramp feeding the pulse width modulator (PWM) comparator, have a significant role in the output resistance of a VRM. These two elements are non-linear and vary based on the VRM operating conditions. As load current changes, so does Vramp. An accurate definition of these parameters is necessary to create a simulation model that best shows these characteristics [7]. Equation 1 demonstrates the relationship between the output impedance and Vramp. Figure 3 shows a graph of Vramp from 0.01V to 1000V and the non-linear output impedance as a function of Vramp.

Figure 3 clearly shows a non-linear result in the output impedance as the Vramp changes to meet the demands of the load. This nonlinearity is not caught in LTpowerCAD’s small signal passive model, which is only centered around a single point for Vramp. 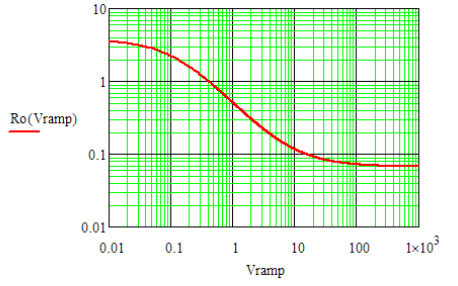 Figure 4 depicts the equivalent output circuit SPICE created by LTpowerCAD to represent the VRM on the DC2603A-A eval. This is the VRM equivalent SPICE model seen in the graph in Figure 2. Keysight PathWave ADS allows the user to plot SPICE models and measurements to enable the user to make comparisons.

A measurement was made on the LTM4650A DC2603A-A EVAL [8] design to validate the predicted output impedance reported by LTpowerCAD. A single-phase of this VRM was measured using Omicron’s Bode 100 VNA, using a P2102A-1X probe with a J2113A Semi-Floating Differential Amplifier [9]. The measured VRM phase matches the setup shown from LTpowerCAD in Figure 1. A 0.105 Ohm load resistor was connected to the VOUT1 port to provide a load current of around 14A. 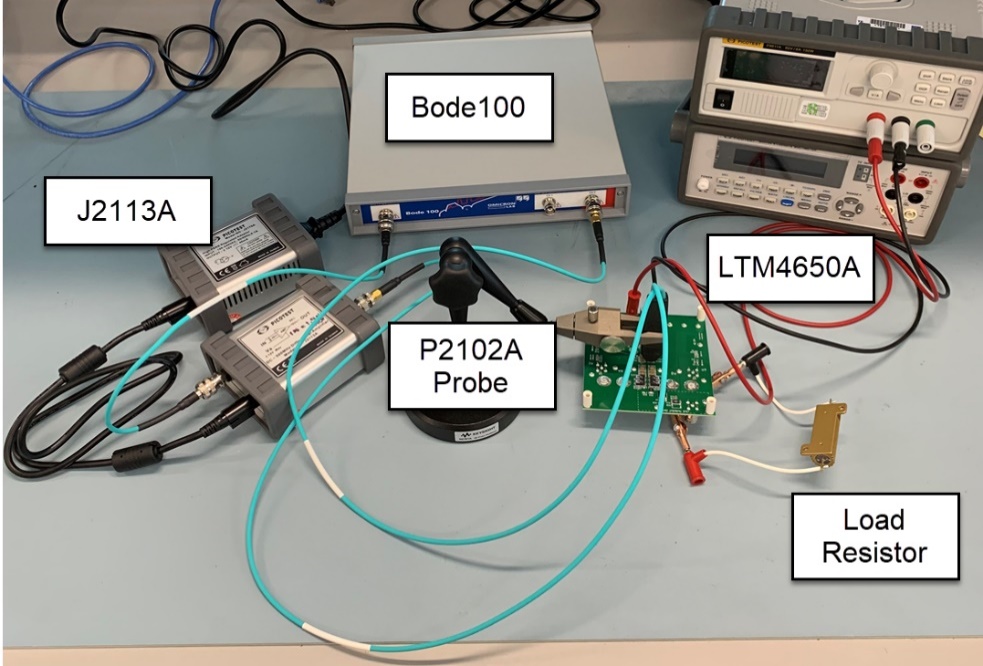 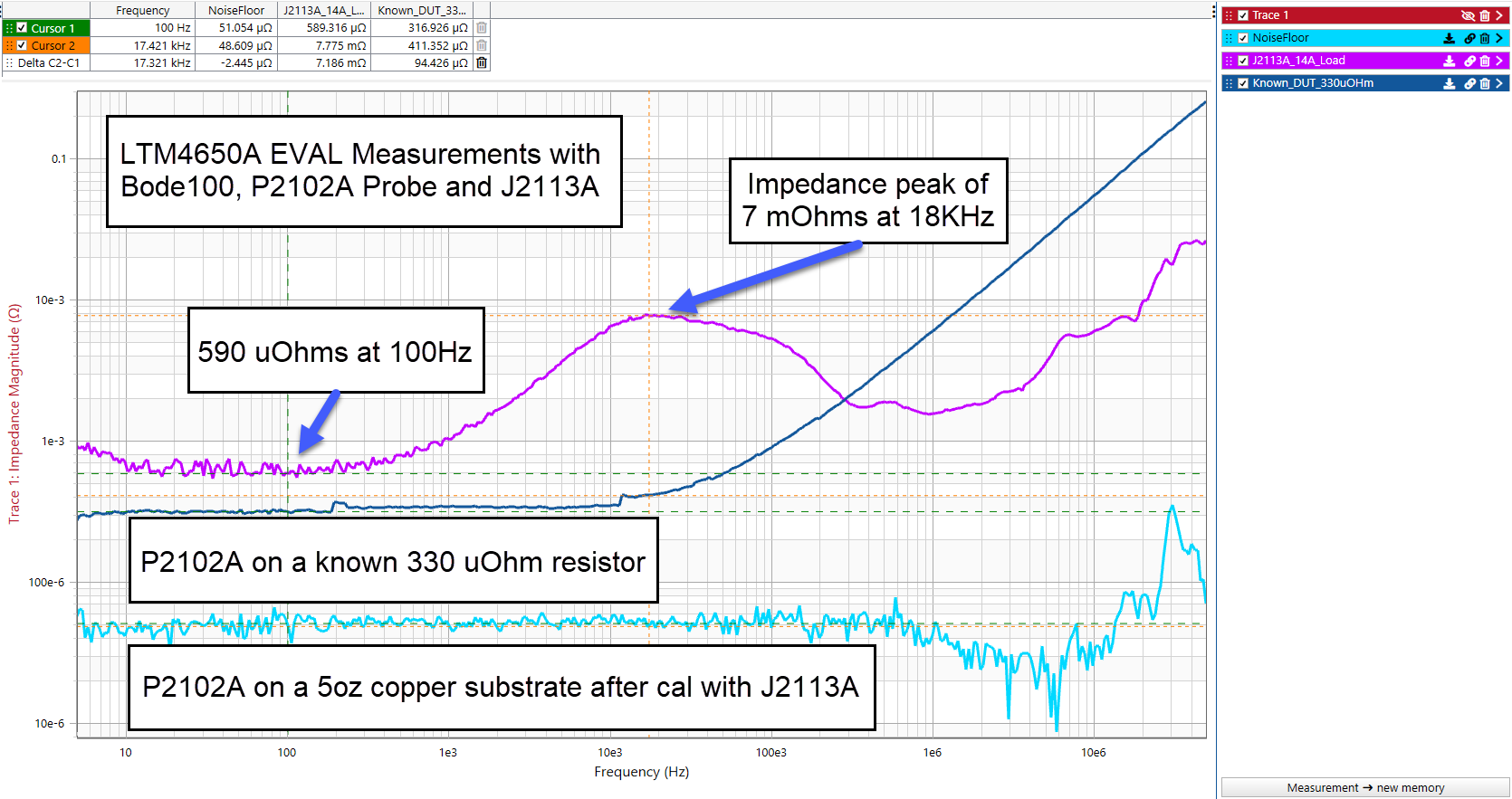 Figure 6. Measurement Results of the DC2603A-A evaluation board

Figure 7 shows the overall equivalent circuit created from Figure 4 for the measurement shown in Figure 6. 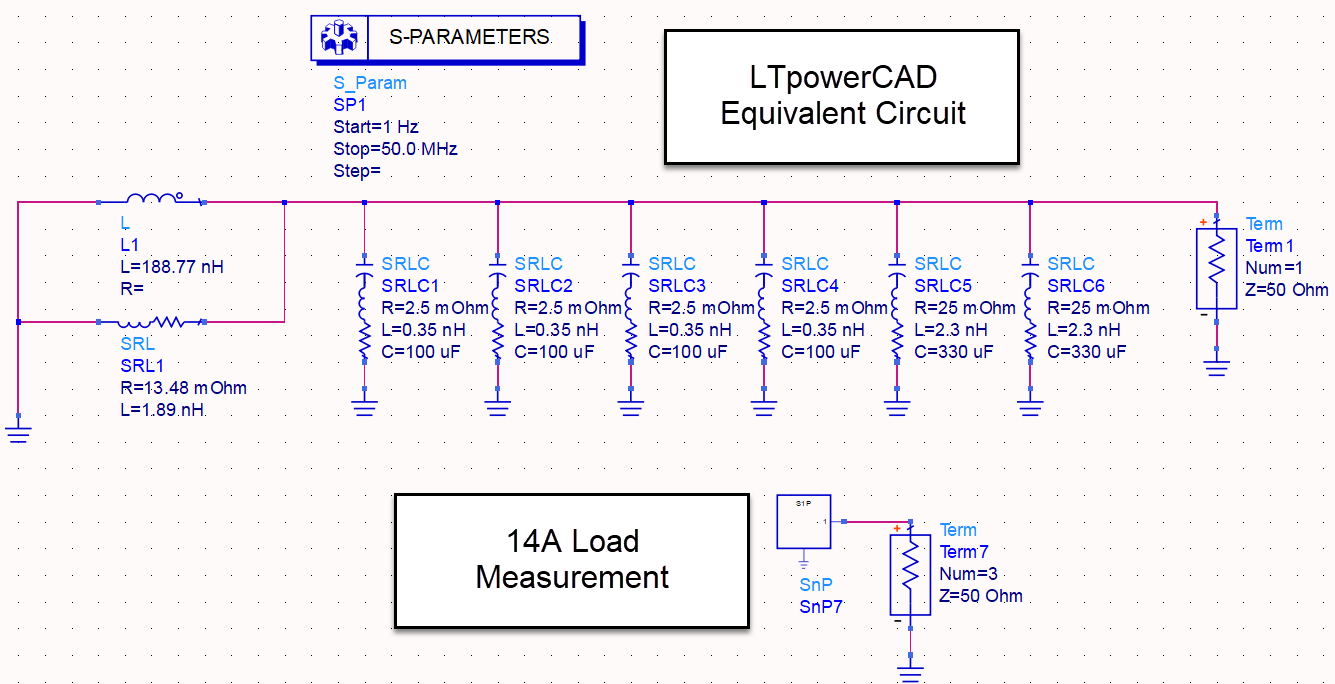 In Figure 8, the two models are in reasonable agreement at frequencies from 500Hz to 50MHz. However, from 5Hz to 500Hz, there is a stark divergence in each model. Markers m1 and m2 show the differences between the peak impedance measurement and LTpowerCAD simulations. The LTpowerCAD peak impedance is 10mΩ at 11.21kHz, whereas the measured value is 8 mΩ at 19.93kHz, a 9kHz difference in frequency. The 2mΩ impedance amplitude difference and shift in frequency between LTpowerCAD and measurement could be due to the inductive difference in the feedback compensation network in the control loop of the VRM [10]. It is important to note that the model is the typical case, and the measurement is at an unknown state between best and worst case. There are also differences in the actual capacitance, ESR, and ESL seen by measurement versus what was used in LTpowerCAD. This observation further emphasizes the importance of having good fidelity passives models. Markers m3 and m4 show a much different result, with a significant divergence before 100Hz that begins at 5Hz. LTpowerCAD only starts its graph at 100Hz; anything lower than that is extrapolation. At 500Hz and lower, the measured model shows a more accurate representation for the Rdson, DCR of the internal inductor, and loop gain of this VRM. Whereas with the LTpowerCAD model, these model parameters are not included. The higher output impedance may also be impacted by the series place resistance between the measurement point and the regulators regulation/sense point.

Figure 9 shows the fitted SPICE model created to fit the 14A load measured model, in red, up to a frequency of 100KHz, as this is roughly the frequency of just the VRM effects on the impedance. The capacitor models are created from the values seen in Figure 1 for capacitance, ESR, and ESL. At frequencies typically greater than 50kHz, the printed circuit board (PCB) effects start to impact the output impedance. Figure 4 shows the LTpowerCAD equivalent circuit model, which includes two inductors and a resistor. This is plotted in blue in Figure 9. The fitted model finds values for these inductors and resistors that best match the measured model using the ADS tuning tool. A second resistor is added before the two inductors and resistor provided by LTpowerCAD. This is to best model the DC resistance seen in the measurements.

A resistor is added that models the impedance from DC to 200Hz, where the inductance of the VRM starts to have an impact. For the 14A load fitted model, the resistance chosen is 650 uΩ, which is noticeably higher than the 100Hz measurement of 590uΩ. This is due to the 100Hz impedance being lower than the average impedance from DC to 200Hz. The new inductors are 124.59nH and 31.65nH. The resistance of the 31.65nH inductor is set to 9.84 mΩ. This compares to Figure 4, which has an inductor of 188nH and 1.89nH, with the 1.89nH inductor’s impedance being 13.48 mΩ. These show significant differences between the LTpowerCAD model and the measured models. 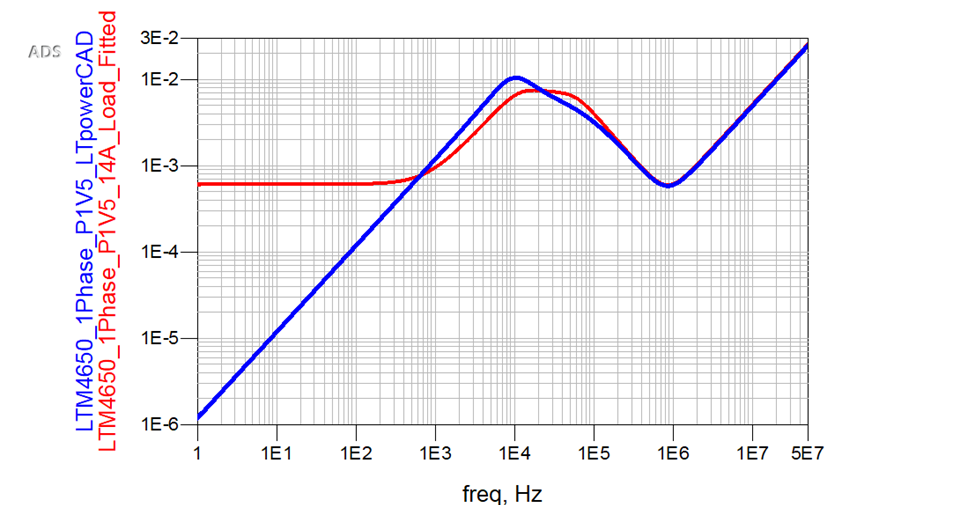 In Figure 10, the percent error between LTPowerCAD and the measurement is used to quantify the differences between these two models. A purple limit line is shown at a 10% error to highlight the frequencies that are above or below this value. A cyan shading area at 100KHz and above shows the area where the PCB effects on the PDN take effect. At 100Hz, the LTpowerCAD model error is 418% with the 14A load! This is potentially due to the Ri, Vramp, Rdson, and the DCR values in the LTpowerCAD model. The models converge slightly better at 5KHz, 41.46% percent error between LTpowerCAD and the measurement. 5Hz is roughly in the middle of the primary inductance curve in the measurements and LTpowerCAD model. A reasonable expectation based on engineering judgment would suggest a value of 10% or less error. In this case, the 41.46% error is the smallest error between the LTpowerCAD small-signal passive model but still seems excessive.

LTpowerCAD uses a small-signal passive model to generate VRM SPICE models. Without a measurement characterization of the evaluation board, these model differences would have been missed, and the power integrity system-level simulation model would have had multiple discrepancies. Vendor models can help start a design, and LTpowerCAD is a helpful tool that provides valuable information to the designer; however, vendor models are not always accurate or even correct. Therefore, designers should trust and verify their models with measurement.

Typically, there are two major categories for switching circuit models, average models and transient switching models. Switching devices are either in an ON or OFF state; therefore, to simulate such a circuit, the switching action must be averaged to generate a small-signal passive model. Output impedance, open-loop phase gain, and input impedance are simulations that can be performed with average modeling. However, average modeling only supports some transient analyses. The major drawback is that ripple, spikes, gate charge, and instantaneous switching loss are not available [11]. Whereas, with the Sandler State-Space Average model in Keysight PathWave ADS, a small-signal and large-signal model can be created for the LTM4650A VRM, where the PCB effects can easily be included to understand your power integrity system. Further, this VRM model allows simulation in discontinuous conduction mode (DCM) and continuous conduction mode (CCM). At the same time, including the ability to model linear and non-linear responses. The Sandler State-Space Average VRM model for the LTM4650A is shown in Figure 11. With a large-signal model, the non-linear responses can now be included, which are not part of the small-signal passive model from LTpowerCAD. To create this model, only a few additional measurements must be made on the DC2603A-A eval to characterize the LTM4650A VRM. As shown in Figure 11, the nonlinear large-signal response of the switch node, output ripple, and inductor current is captured along with the small-signal output impedance response. 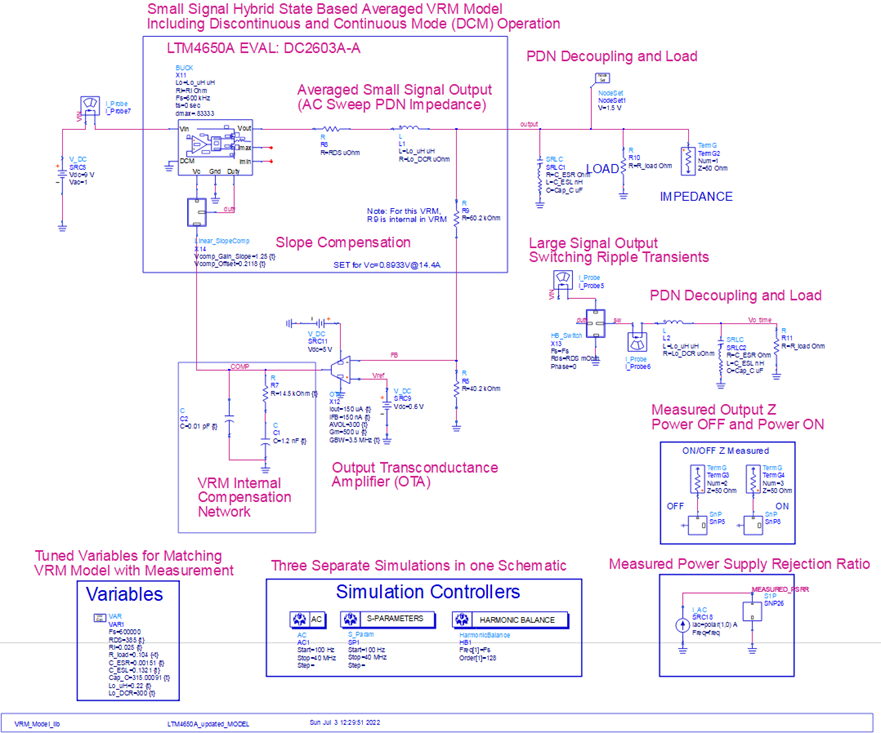 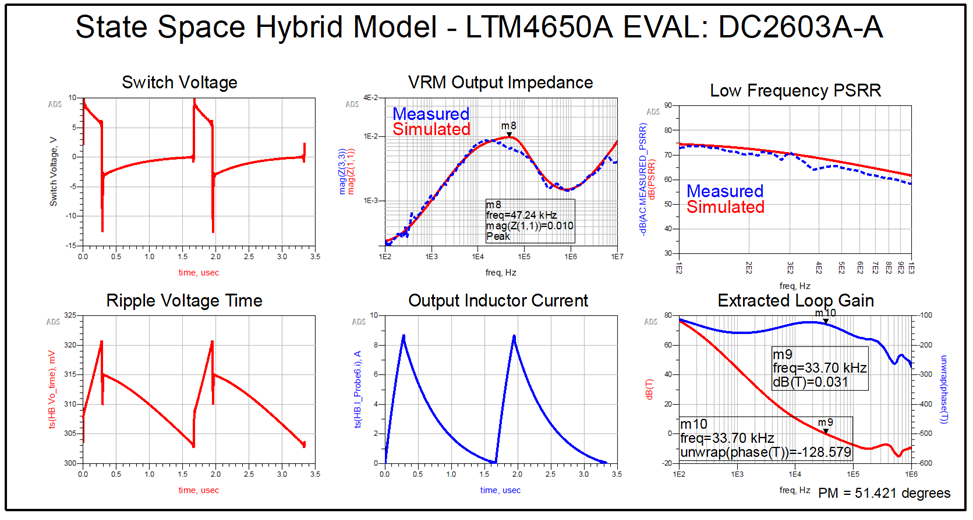 To drive home the criticality of designing our systems in this manner, we can reference an article by Steve Sandler [1], where he discusses how many low-power circuits are hyper-sensitive to power supply noise. If the simulation model is not accurate, potential design flaws of the model or errors may not be caught until the production cycle. Designers must take their own measurements so that the designer can verify and trust the model.

Which Discontinuities are Small Enough to Ignore?

Validation of Bend Models with Measurements