Measuring Only Board-level Power Rail Noise May Be Misleading Power rail measurements are important because they can identify potential sources of noise before they become a problem. However, measuring only the power rail noise at the board-level may be a misleading indication of the noise the die actually sees.

Measuring a power rail on a board seems like a simple task. Like all measurements, it is easy to get a waveform on the oscilloscope’s screen, but it is difficult to have confidence you have eliminated the measurement artifacts and have a realistic measure of the actual signal present.

For example, the type of probe used to connect between the board/device under test (DUT) and the oscilloscope plays an important role. If you use a 10x probe, the tip loop inductance can act like an antenna and pick up RF noise either from the external environment, or from the near-field environment of the power rail itself. Figure 1 shows the voltage on a 3.3 V switch-mode power supply (SMPS) measured with a 10x probe, and the pick-up noise from an adjacent 10x probe shorted to itself, acting like an RF antenna.

Figure 1. A 3.3. V power rail measured with a 10x probe and a coaxial connection, with an adjacent 10x probe acting as an RF antenna, and the resulting oscilloscope traces.

In this example, an independent measurement of the power rail voltage was made at the same location as the 10x probe using a coaxial connection on the board with a coax cable directly into the oscilloscope. This connection did not pick up any external or near-field radiated emissions, and it did not attenuate the signal by a factor of 10 like the 10x probe did. This is an example of the impact different probing methods can have.

A Simple Model for the PDN

Figure 2 is a simplified view of the PDN showing some of these low-pass filters.

Figure 2. A simplified view of the PDN showing some of the inductance from the interconnects and the LC filters they create.

If the aggressor is the transient current from the die, the voltage noise on the die when depleting the on-die capacitance will drive dI/dt currents through the package lead inductance. While this noise will be measured on the die, since it generally has high frequency components, it will be filtered by the time it gets through the low-pass filters of the package lead inductance and board-level decoupling capacitors. It may not appear on a node on the board-level power rail.

Measuring Rail Compression on the Die

In most applications, we do not have access to the bare die when the chip is assembled on the circuit board. If the IC package has not been instrumented with special pass-through features connecting the rails on the die to board pins, we have to rely on a special trick.

When the I/Os of a chip all share the same power and ground rails, which is often the case in small microcontroller devices, designated I/Os can be used as sense lines to measure externally the power rails on the die.

We call these special I/Os a quiet HIGH and a quiet LOW line. When they are set as a fixed value, their output voltage should not change. Any voltage variation on these lines is only due to noise either on the rail to which they connect or picked up somewhere along their signal-return paths. If these connections are designed as uniform transmission lines with a solid return plane, with other signals far away, the voltage measured at these test points will be dominated by the voltage of the on-die rail relative to the local board ground of the test point.

The equivalent circuit of a typical CMOS I/O showing the connection from the on-die rails and the board-level test points is shown in Figure 3.

Figure 3. The equivalent circuit showing the connections between the I/O transistors, the Vdd and Vss rails, and the on-board test point.

What we actually measure is the voltage on the test point relative to the local board ground plane. As long as there is no additional noise picked up on the test lines from where they leave the package to where they reach the test point, the measured voltage difference between the Vss and Vdd test points would be equal to the rail compression on the die. 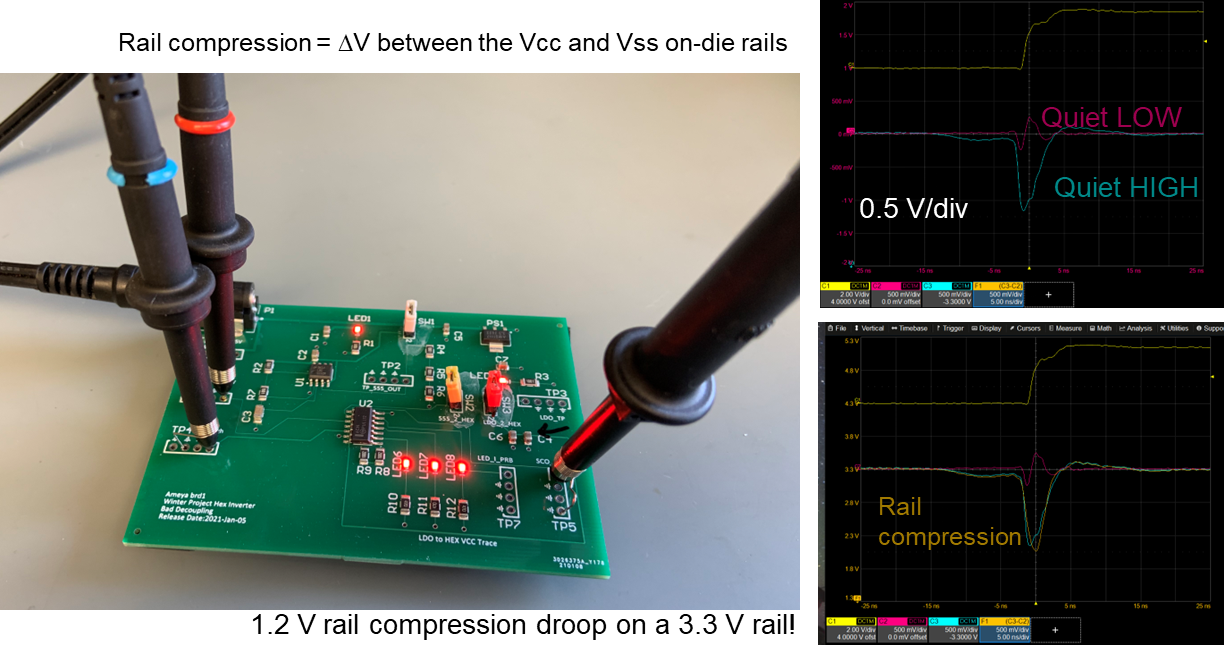 Figure 4. The test board with three 10x probes measuring a switching signal, and the quiet LOW and quiet HIGH test points (left). The rail compression is the difference between the measured voltage of the quiet lines relative to the local ground (right).

In this example, the Vdd power rail was 3.3 V. The measured rail compression during the time at which the I/Os were switching was as much as 1.2 V. This is huge. It is so large that it affects the output signal rise time and would have caused false triggering on other I/O lines. If this rail was also used by the core logic, bit errors would definitely be generated.

Using the quiet LOW and quiet HIGH sense lines gives a direct measure of the rail compression noise on the die itself. This is what is important, since it is this noise which will affect the correct functioning of the die and the impact from noise on false triggering.

Also on this test board is a test point connected to the 3.3 V output of the LDO. At this point, we measure the voltage noise on the board. It is exactly the same net as the Vdd rail on the die, but it is located some distance away from the on-die test point, and on the other side of the low-pass filter from the source of the noise.

Figure 5 shows the board set up and the measured on-die rail compression and on-board voltage noise synchronous with the I/Os switching. 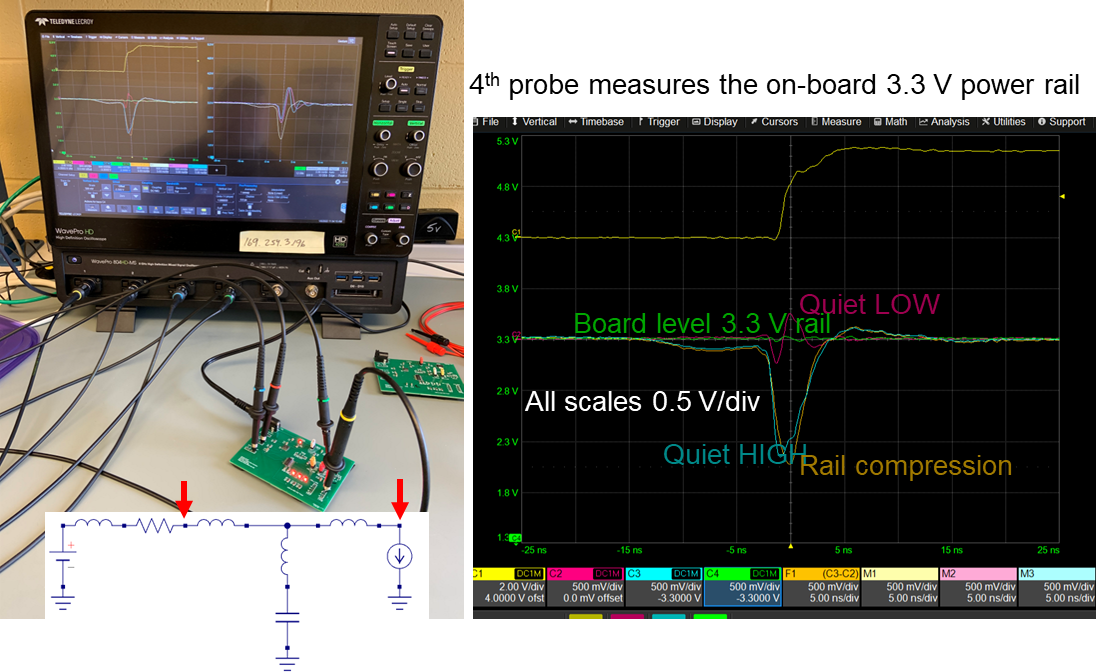 Figure 5. Set up to measure the voltage noise on the board-level rail, the quiet HIGH and quiet LOW test points, and the measured voltages. The on-die rail compression was a dip of 1.2 V, while the on-board voltage level changed by less than 0.025 V. All voltages are displayed at the same scale.

On the oscilloscope trace in this figure, the measured on-board 3.3 V rail is about 0.025 V, a very small amount of noise when the I/Os switch while there is 1.2 V of compression on the die. This is because the noise on the die, the aggressor signal, has to get through the low-pass filter composed of the package lead inductance and the local decoupling capacitors to get to the LDO, the victim location. The pole frequency of the low-pass filter is about 1 MHz in this board. Since the rise time of this noise is about 1 ns, its bandwidth is about 350 MHz. Very little of this noise gets through the 1 MHz low-pass filter.

If we had measured the voltage noise on the board and seen just 0.025 V amplitude noise, we would have concluded that the power rail noise was very low and insignificant, not to worry. In fact, the actual on-die compression was more than one-third the entire power rail, large enough to affect robust functioning of the chip.

Without this sort of on-die measurement, you would have no idea your product was so close to failure, until some customer ran it through some operation that was sensitive to this large of an on-die noise level. Without the diagnostic of knowing how large the on-die power rail noise was, finding the root cause of the problem would be as difficult as hunting a snipe.

If you use measurements of the noise on the board as an indication of the goodness of various design decisions, be careful you are not drawing false conclusions.

Implementing the technique of using a quiet HIGH and quiet LOW I/O pin is a simple way of opening up a small window onto what is happening with the power rail of your die.