I receive many questions about measuring power rail noise: Do I really need to use a power rail probe to measure ripple and noise? Power rail probes are single ended, so does that mean I can only monitor one power rail at a time? Are there other, more affordable options available? In this blog post, I am going to answer these questions.

There are plenty of posts on making your own budget probe. I do not recommend this for a variety of reasons, such as ­uncertainty in the results, lack of calibration and certification data, and safety issues. It is also a poor use of expensive engineering time. Because of this, I only considered off-the-shelf probes in my testing.

The questions I get are generally related to mixed signal and application-specific integrated circuit (ASIC) boards, so I’m going to limit our discussion here to power rails of 5 V or lower, with the assumption that we want to see the direct current (DC) voltage on the screen. This definition disqualifies the use of DC blocks, which in some cases are a valuable and viable solution for improved sensitivity or higher voltages. BEWARE, NEVER EXCEED THE INSTRUMENT RATING, EVEN WITH A DC BLOCK.

A summary of solutions is shown in Table 1. The data was recorded using less than perfect fixtures. However, the measurements were all performed using the same fixtures, including the same Power Distribution Network (PDN) Cable® (specialized interconnecting cable for power integrity test applications); this should allow the performance to be ranked properly. The scope alone and TPP1000 probe are included in the measurements for reference.
Table 1. Comparison summary of the measured data for all probes. It should be noted that the TPR4000 includes a 1GHz browser probe. Adding a higher bandwidth browser probe, such as the P2105A, would allow full bandwidth, but would also raise the overall cost.

NOTES: The flatness is typically within +/- 1dB, these reflect mostly peaking probes.
The dynamic range is either limited by specified clipping (power rail probe), oscilloscope terminator rating or the probe termination resistor rating. The lowest rating is reported for each probe.

The noise was measured, for each probe, both peak-to-peak and in AC rms. The measurements were all performed with the probe shorted on the shorting square of the Picotest P2100A-CAL calibration board, which is included with the P2104A probes, as shown in Figure 1. 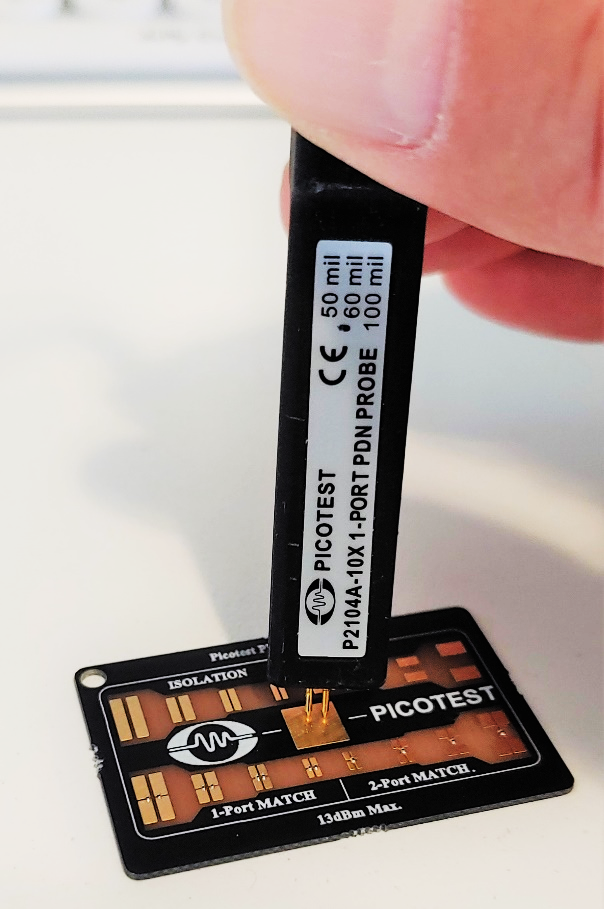 Figure 1. Noise is measured for each probe using the same PDN cable and with the probe shorted on the Picotest P2100A-CAL SHORT pad.

The AC rms noise was converted to noise density by dividing by the square root of the measurement bandwidth. This is then converted to noise figure, or the ratio of the noise to the noise in a 50 Ohm terminator, in dB. This is a common RF figure of merit and simplifies the direct comparisons.

I also get my share of questions about the measurement bandwidth. This really depends on the devices on the power rail. Many field-programmable gate arrays (FPGAs) include significant package filtering, while some don’t. These higher-powered devices are generally limited to a few hundred MHz at most. Smaller devices, including an ultra-high speed complementary metal oxide semiconductor (UHS CMOS), SiGe and other high-speed devices can easily get to a few GHz. Using a high bandwidth probe provides the most flexibility. Once we measure the noise with high bandwidth, we can use the spectral plot to determine the best bandwidth setting. We want to limit the scope bandwidth, since this directly contributes to the measurement noise. Given that power rail noise is dynamic, we can’t use averaging to clean up the waveforms.
If you can’t get spectral content on your oscilloscope, reduce the bandwidth until the noise measurement starts to decrease.
Flatness, along with bandwidth, is important because peaking in the probe response can result in measuring too much noise, requiring additional design cost to solve a non-existent problem. You should know the flatness of the probes you use for power rail measurements.

Looking at the data, this again is a strong suit for the power rail probe. The response is very flat over the full bandwidth, as seen in the impulse test shown in Figure 2. Attenuating P2104A probes offer higher bandwidth but possibly also with higher peaking. The peaking in these measurements may be due to the fixture. In a future blog, we will explore this further. 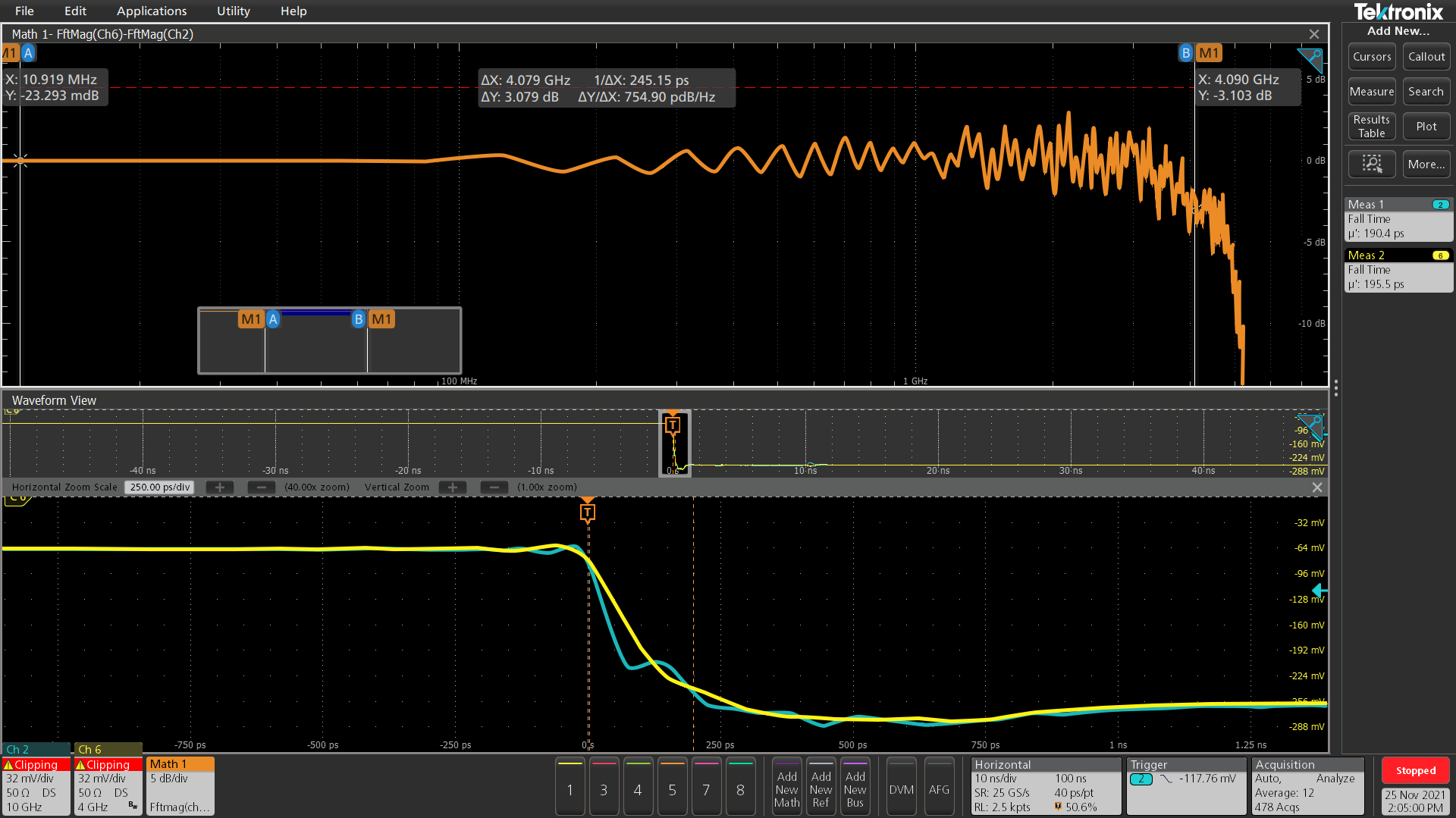 For power rail voltages below 1 V, the P2105A TDR probe and P2104A-1X 1-port probes offer slightly better sensitivity than the power rail probe at 1mV/div compared with 1.25mV/div, so a very small difference. The attenuating probes scale the sensitivity by the attenuation, so at 5 X, the best sensitivity is 5mV/div.

CMRR – J2102B CM Transformer Can Be Helpful for All Probe Measurements

All the probes tested here are single-ended probes, so they all suffer from ground loops. Above about 10 MHz, depending on the cables, the cables themselves will offer CMRR. Below about 10 MHz, the CMRR performance can be greatly improved by the addition of a coaxial transformer. The TPR4000 power rail probe and P2104A-1X probe CMRR were measured with, and without, the addition of a Picotest J2102B coaxial transformer as seen in Figure 3. Again, the probe measurements are fixture limited. 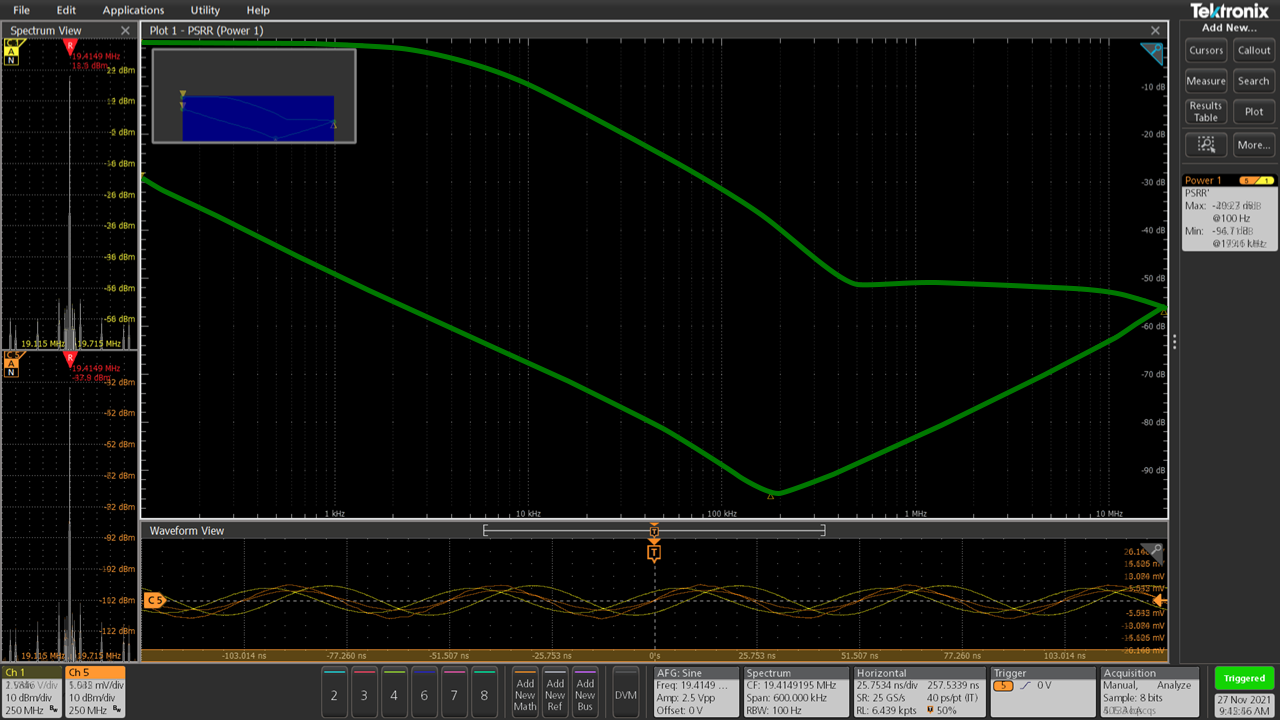 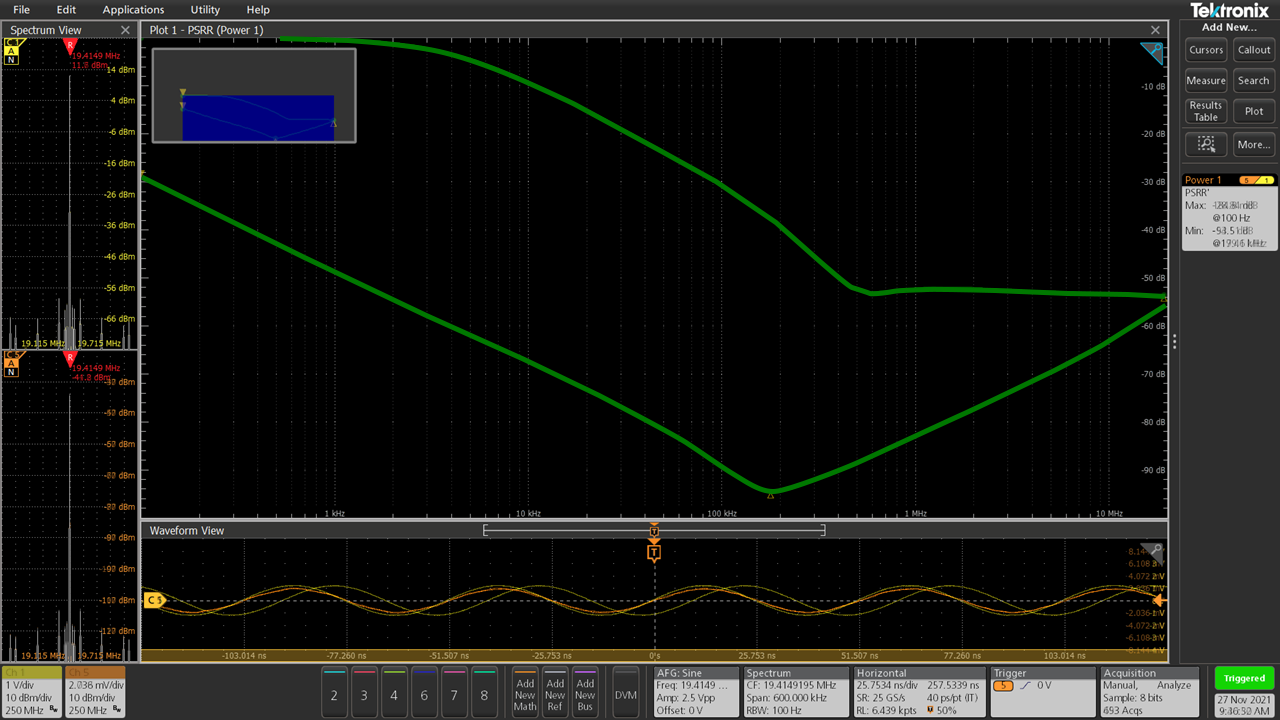 The dynamic range of the TPR4000 power rail probe is specified as 1 Vrms, though in my measurements I achieved 1.8 V. I would stick with the specification limit, since this could be an overstress issue. The P2105A TDR and P2104A-1X probes have a 20Vpk/2.3Vrms dynamic limit. The higher dynamic range also allows high fidelity measurements of the VRM switching node and the gate voltage, if the DC loading isn’t an issue.

Figure 5. High fidelity switch node measurement for a 12 V input VRM using a P2104A-5X probe. A 3 X (attenuation) probe could be used and still be within the allowed RMS rating.
One significant benefit of the TDR and 1-port probes is that they can be used for other purposes and with other instruments. For example, two 1-port probes can be used to measure very low PDN impedance, in the 2-port shunt-through configuration using a vector network analyzer (VNA).  The 1-port probes can be used with signal source analyzers for measuring noise density and with signal generators to inject noise into the PCB for jitter troubleshooting. The Tektronix MSO6 oscilloscope used in this analysis can perform all of these measurements.

The power rail probe is certainly more expensive than the TDR or 1-port probe, though this may be misleading. While the 1-port probes are less expensive, most engineers want several attenuations to support different voltage ranges with optimum performance.

Based solely on noise figure and bandwidth, the P2105A TDR probe offers the best performance for power rails of 1 V or lower and allows higher dynamic range. Up to 1.8 V, the TPR4000 offers 3 dB lower noise, while the P2104A-2X offers larger dynamic range at a lower cost. The screenshot in Figure 6 shows a spike in the voltage ripple on the 1.8 V output of the LTC3315B EVAL board, using both the TPR4000 and the P2104A-2X. While the noise figure of the P2104A-2X is a bit more than 3 dB higher than the power rail probe, the measurements are nearly identical in the result and in fidelity. A P2105A TDR probe was used as the browser for the power rail probe, so as not to limit the bandwidth. 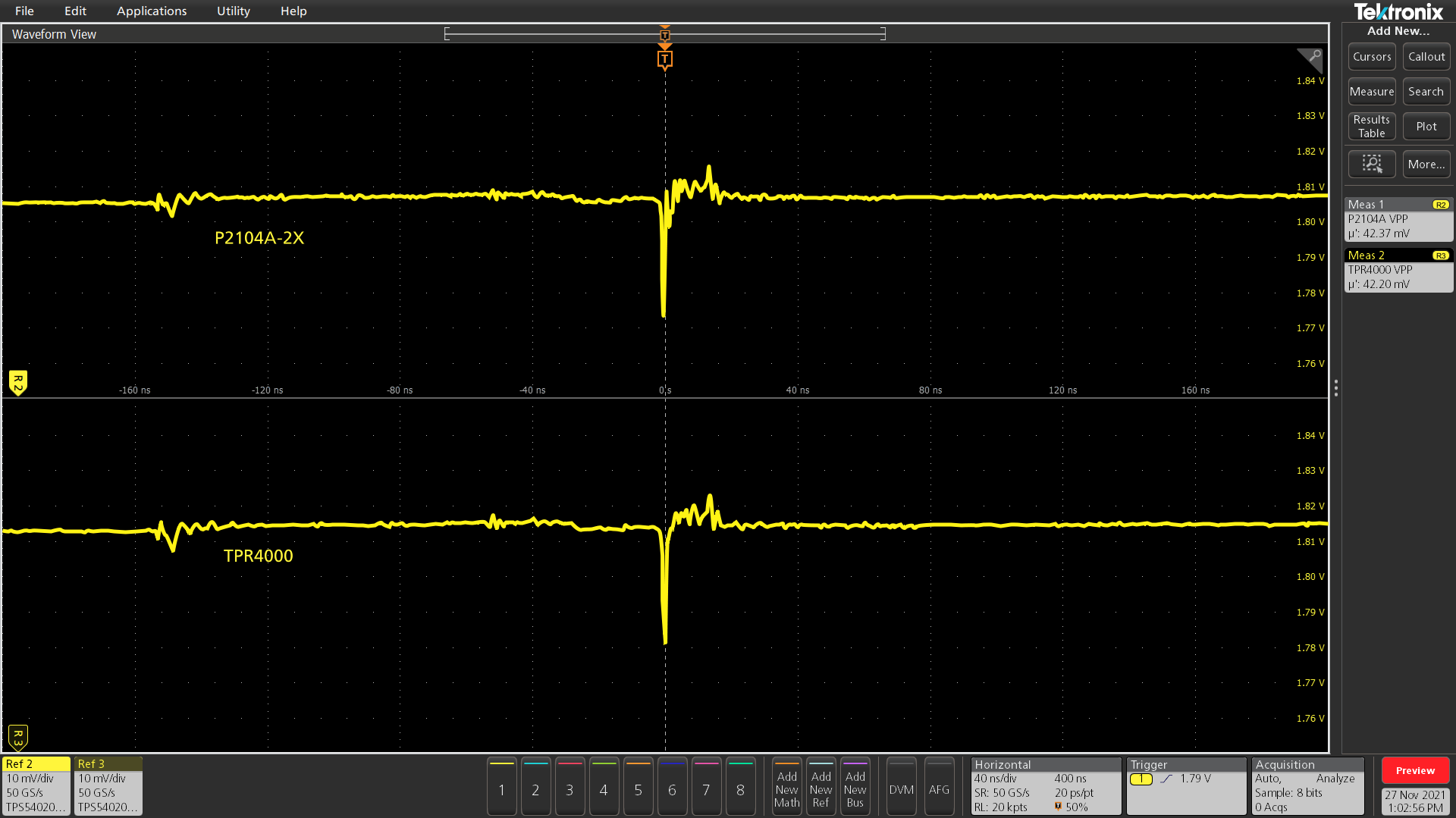 Engineers focused on 1 V and lower core supplies will get the best noise and bandwidth from a P2105A TDR probe.