IPC 2152 [1], published in 2009, was the most thorough, most complete study of trace current/temperature relationships ever undertaken. It contains over 90 pages and charts looking at the relationships from numerous directions. Prior to IPC 2152, the industry had been using a set of charts that go back to an NBS document (Report # 4283) published in 1956 [2]. Apparently, the charts were first published as a part of a military standard, MIL-STD-1495, in 1973. They were later published in a subsequent series of standards, culminating in a MIL-STD-275E, published in 1984. Later still, the charts were published as part of an IPC standard IPC-D-275, and finally in IPC standard 2221A in 2003. 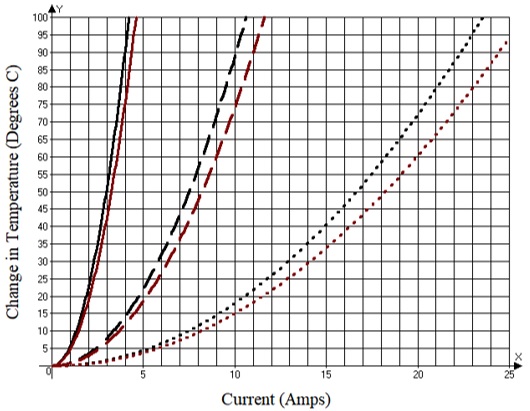 The following procedure was followed. Using the tables in IPC 2152, a sample of 44 data points was taken over three different trace thicknesses, 1.0, 2.0, and 3.0 ounces, several different widths for each thickness, and several different current levels. The IPC 2152 data and curves deal with temperature changes from ambient. Each data point included both internal and external trace temperature changes for otherwise identical trace/current combinations. The data were compared, and the relationship between the two changes in temperature (DTi vs DTe) was found to be much more complicated than first assumed. A regression analysis [5] was performed with the following resulting equation (Equation 1).

Since Equation 1 is non-linear and involves wide ranges in the values of the variables, it is difficult to represent it graphically and to draw any conclusions from it. But we can “normalize” it by dividing through by DTe. That gives us the ratio, DTi/DTe, which is more intuitively useful. Doing so results in Equation 2.

Examining Equation 2, we can determine a couple of relationships:

The reason for these last two effects is that wider and/or thinner traces have relatively more surface area in contact with the dialect and therefore conduct heat away from the trace more efficiently. These three relationships can be seen in Figure 2. 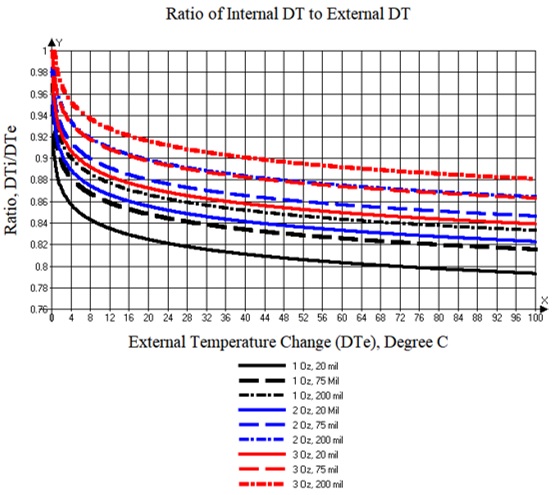 If we want to compare Equation 2 with the actual ratio of the temperature change as derived from IPC 2152, we can calculate the ratio of the temperature changes for each data point using Equation 2 for the analysis. Then, we can graphically compare this calculated result with that data point derived from the IPC 2152 actual curves themselves. We would expect the comparisons to be (approximately) equal. Figure 3 illustrates the result. It graphs the predicted vs actual ratio of the change of temperature, DT(internal)/DT(external), for each of the 44 data points of the sample. A 45-degree line is superimposed on the graph. If the predictions were perfect, they would all lay exactly on this 45-degree line. As can be seen, the fit is very tight. 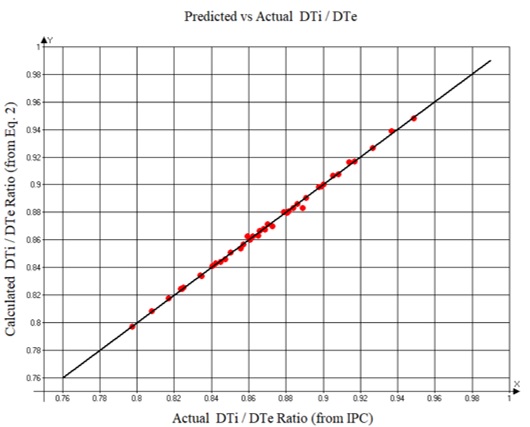 Figure 3. Graph of the ratio of the predicted (from Equation 2) vs actual (from IPC 2152 curves) change of temperature DT(Internal)/DT(external), along with a superimposed 45-degree line.

Fraction ranges from 1.0 at the midpoint of the board to 0.0 on the surface layer.  We estimate the relationship to be that shown as Equation 4 and plotted in Figure 4.

Where: Depth = the depth of the trace expressed as a fraction of the total board depth.

Figure 4 illustrates this. At a relative depth of 0.5 (middle of the board) the ratio of the internal temperature change to the external temperature change is 100% (1.0) of the result predicted from Equation 2 above. But let’s say a trace is at a relative depth of 0.1 (that would be just 6 mils into a 60 mil thick board). At that point the difference in trace temperatures would be 42.5% of the maximum difference, DTe - DTi(min). 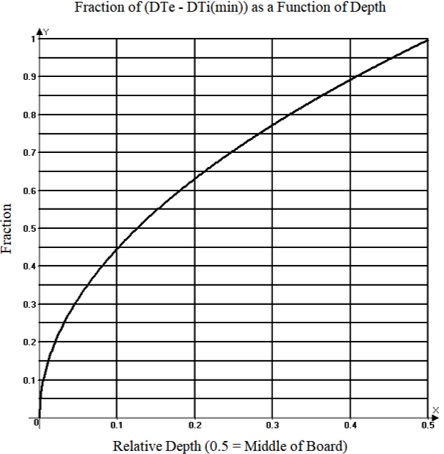 Figure 4. Fraction of full internal temperature difference as a function of trace depth.

We can achieve this result directly by recognizing that we are deriving the internal change of temperature from:
Equation 5:

There are a few caveats to this analysis. As we point out in our book [3] and in a previous article [6], one of the most important determinants of trace temperature is the thermal conductivity coefficients of the dielectric. There are two such coefficients: one in the “in plane” orientation (parallel to the traces), and one in the “through plane” orientation (perpendicular to the traces.) These coefficients relate to the cooling efficiency of the dielectric, and the trace temperature is heavily dependent on them. The problem is, most material suppliers do not specify a thermal conductivity coefficient for their product offerings, and if they do, they typically offer only one value without specifying which coefficient it is. You probably cannot know the coefficients for the materials you are using, and IPC 2152 does not report the applicable coefficients for their measurements. So we can be comfortable that the above analyses apply pretty well to the IPC 2152 data (since that’s where our analyses were derived from), it is less clear how well they will apply to your particular boards and designs. (In fact, this is what our book [3] is all about.)

1.  IPC 2152, “Standard for Determining Current Carrying Capacity in Printed Board Design,” August, 2009, Published by IPC, IPC.org
2. Published by the Natural Bureau of Standards as Report # 4283. For more information, see IPC-2152, Appendix A.7, p. 85. A copy of the original
NBS chart is included there as Figure A-89, p. 86.
3. Brooks and Adam, PCB Trace and Via Temperatures: The Complete Analysis, 2nd Edition (available on Amazon.com) chapter 4 for a thorough discussion of trace heating and cooling.
4. Information on the topic of regression analysis is readily available on the Web. R2 is a measure of correlation or “goodness of fit.”
5. TRM (Thermal Risk Management) was originally conceived and designed to analyze temperatures across a circuit board, taking into consideration the complete trace layout with optional Joule heating as well as various components and their own contributions to heat generation. TRM is available at http://www.adam-research.com.
6. “PCB Trace Current/Temperature Relationships and their Dependencies,” Signal Integrity Journal, October 8, 2019, https://www.signalintegrityjournal.com/articles/1406-pcb-trace-currenttemperature-relationships-and-their-dependencies