As a rule, I dislike giving away the punch line at the beginning of an article. But I think it is appropriate in this case. Current density can be an interesting concept. Graphics based on current density can be fascinating. But from a practical standpoint, current density is irrelevant. It is a consequence of other things, not a determinant of them. What follows will explain why.

All trace combinations have identical cross-sectional areas, 0.075 mm2 (120 mil2). We applied 7.5 Amps through each trace combination and evaluated the current density and trace temperature. The results are shown in Table 1.

Table 1. Simulation results
By definition, the current densities for each combination must be equal, and therefore the I2R heating component is equal for each case. They are all carrying the same current and they all have the same cross-sectional area. But the temperatures are different. The reason is that the trace temperature does not just depend on the current. It also depends on the form factor of the trace and the (thermal conductivity coefficient of the) materials surrounding the trace (Note 2.) The surface area in contact with the board material is what determines the cooling efficiency of the trace. Therefore, thinner, wider traces will be cooler than thicker, narrower traces with the same cross-sectional area. External traces will be hotter than internal traces, all things equal. Therefore, current density is not particularly relevant when talking about trace temperature issues.

If you want to start a fight… find a room full of engineers, ask about right angle corners and EMI, and then shut the door. Or, go to the SI-List and ask the question.

The argument goes that current density is highest at the sharp bend of the corner (actually not true) and therefore EMI radiation will be highest at that point (also not true.) A landmark study was performed in 1998 that hoped to put this argument to bed (it didn’t!) (Note 3). Figure 2, from that study, illustrates a test board that was fabricated in order to measure radiated EMI from a variety of corner configurations. There were no significant differences in radiation from any of the traces, even the diabolically designed trace 7 with pointed 270 degree corners. Current density (and right angle corners) do not seem to be related to EMI.

Figure 2. Test board for evaluating radiated EMI from different trace corner configurations.
Figure 3 illustrates the current density around a simulated right angle corner. The simulation was performed using TRM. The simulation is for a 200 mil wide, 1.0 Oz trace on a 63 mil thick FR4 board. The applied current is 8.0 Amps. It is apparent from Figure 3 that the highest current densities are at the inside corner and the lowest densities are at the outside corner. But the reason doesn’t have to do with the shape of the corner. The reason has to do with path length.

As an aside, it should be noted that the cross-sectional area increases as we go around the corner. The trace thickness remains constant, but the width increases to its maximum (as much as 1.414 x W) at the middle of the turn. Therefore, the overall current density decreases in the corner area as we move towards the midpoint of the curve. 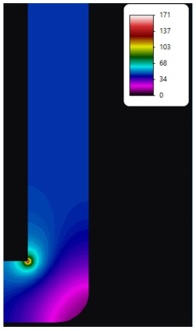 Figure 4 illustrates the thermal profile of the same simulation. Three points, A, B, and C, are shown in the figure. A and B are at the inside and outside edges of the curve in the trace. C is the midpoint of a straight section of the trace. The numbers beside the letters are the temperatures in oC at each respective point. Even though the current density (Figure 3) is much higher at point A in the model, the maximum temperature along the trace is at point C.

There are several dynamics at work here at the same time. First, the temperature is reduced in the curved area of the trace because the cross-sectional area of the trace is increased. The current is constant but the resistance decreases as the trace width increases. Therefore, the I2R heating component is reduced around the corner. Then, the inside edge of the trace is hotter because the cooling efficiency (of the board material) is much lower there than at the outside edge. The inside of the corner cools (conducts heat) into a 90-degree quadrant of the turn. Some of the straight portion of the trace also cools into this same quadrant. But the outside edge cools (conducts heat) into a 270-degree quadrant, that’s 300 % more area for cooling. The outside edge of the trace cools much more efficiently and therefore its temperature is much lower. None of this has anything to do with current density, which is a byproduct of the other things going on. 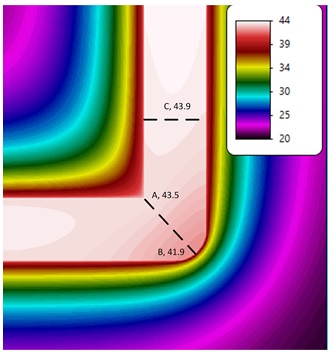 Figures 5 and 6 come from our via analyses. The details are not particularly import and can be found in our book (Note 4.) Graphics of current densities around vias are not particularly interesting. We showed in an earlier article (Note 5) that via temperatures are unrelated to current (or current density); they are determined by the trace temperature. So the current density patterns in Figure 5 are of only passing interest. At the risk of offending some engineers, however, I will comment that they do sort of resemble a hydraulic (water) analog of current flowing through a drain from one rectangular container to another!

A more interesting situation is shown in Figure 6. A top trace is connected to a bottom trace, which is perpendicular to it, with four vias. The current between the trace segments divides between the four vias.

An unexpected result of our analyses is that if we measure the current “entering” each via by integrating the current density around the top of each via and multiplying by the via cross-sectional area, and then summing that all up, we get an answer greater than the applied current (a seemingly impossible answer.) The reason is that not all the current density at the top of the front vias represents current actually entering those particular vias. Some represents current “passing by” the front vias on the way to the back vias (Note 6). 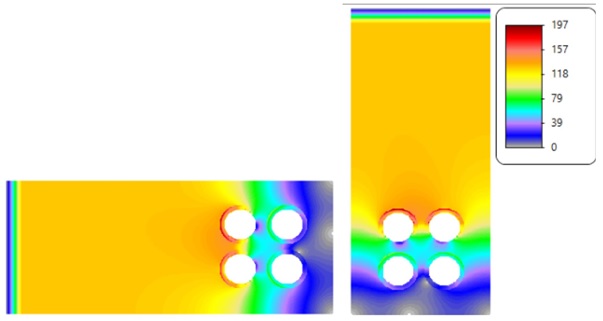 1. TRM (Thermal Risk Management) was created by Dr. Johannes Adam, President of Adam Research (www.adam-research.com). TRM was originally conceived and designed to analyze temperatures across a circuit board, taking into consideration the complete trace layout with optional Joule heating as well as various components and their own contributions to heat generation. Learn more about TRM at http://www.adam-research.com.
2. PCB Trace Current/Temperature Relationships and their Dependencies, Douglas G. Brooks, PhD. With Dr. Johannes Adam, Signal Integrity Journal, October 8, 2019. See also the many studies in Brooks, Douglas G. and Adam, Johannes, “PCB Trace and Via Currents and Temperatures: The Complete Analysis. 2nd Ed.,” 2017, available at Amazon.com.
3. Douglas Brooks, “90 Degree Corners: The Final Turn,” Printed Circuit Design Magazine, a Miller Freeman Publication, January, 1998, reprint available at https://www.ultracad.com.
4. See Chapters 7 and 8 in “PCB Trace and Via Currents……” referenced in Note 2. Specific numerical calculations for several different via configurations can be found in Appendix 6 in that reference.
5. Douglas Brooks and Johannes Adam, “Vias Are Cooler Than We Think,” Signal Integrity Journal, Nov. 26, 2019.
6. For more on this, see the detailed discussion on via current density measurements in Appendix 6 of “PCB Trace and Via……” referenced in Note 2.

Finally, an Augmented Reality App That is Not Just Cool but Useful