In the previous section, we only focused on symbol multiplexing mode as shown in Figure 1. In this section other coding schemes like bit-multiplexing and codeword interleaving will be added. 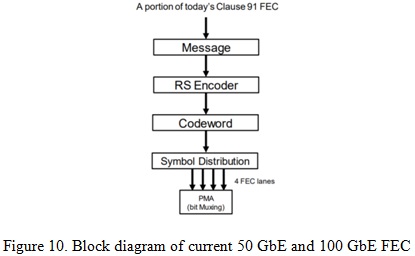 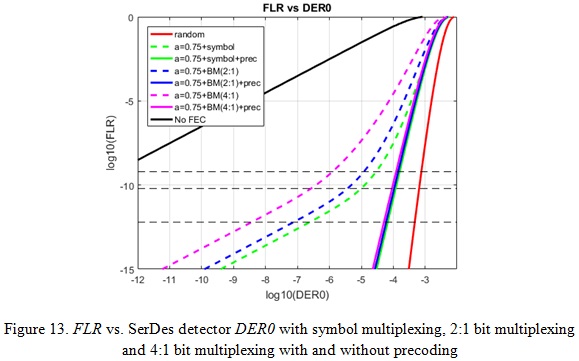 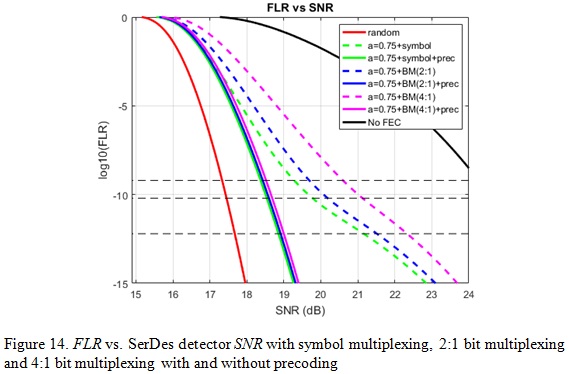 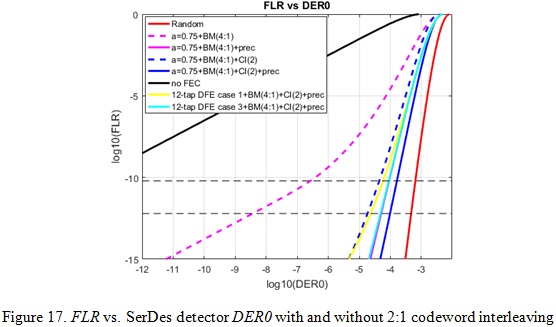 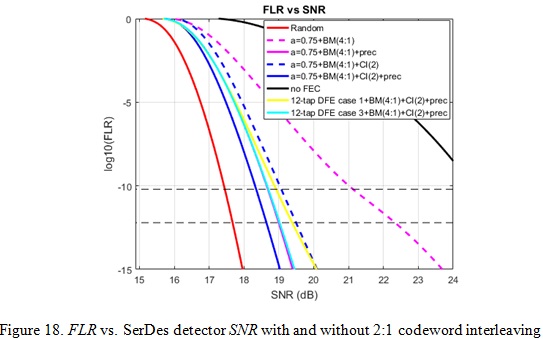 Table 3 shows FEC performance for 100 GbE and 200/400 GbE with a 100 Gb/s interface with different coding schemes and burst error profiles. For 100 Gb/s Ethernet, the target FLR is 6.2e-10. There is no codeword interleaving but there would be PMA 4:1 bit multiplexing which may harm KP4 FEC performance.

For 200 Gb/s and 400 Gb/s Ethernet, the target FLR is 6.2e-11. Two codewords are interleaved in a checkerboard pattern and there would be PMA 4:1 bit multiplexing. At the SerDes PHY level precoding can be enabled or disabled. Random error, 1-tap DFE and 12-tap DFE are considered for the analysis.

From the results we can conclude: 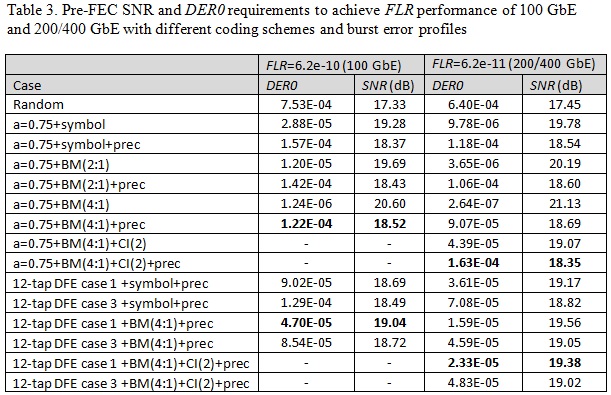 FEC for the multi-part link

If the FEC parity check bytes are added at the beginning part of the link and then the correction is applied only at the destination of the link, the worst case input BER for the FEC decoder must be met by the concatenation of all of the sub-links. In general, the electrical sub-links might be chip-module and chip-chip with DFE (and error propagation) while the optical link is assumed to have random errors. The toughest part of the link is assigned the bulk of the coding gain. For Ethernet, this is the optical link. However, to allocate a relatively smaller coding gain to the electrical links, a SNR penalty must be taken from the optical link.  Now assumes a tolerable (e.g., 0.1-0.2 dB) SNR penalty to be taken away from the optical part of the link.

Previous sections only focused on a RS (544, 514, 15) code over GF(210) (also-known-as KP4 FEC) for 100 GbE and 200/400 GbE systems and potential coding schemes like 4:1 bit multiplexing and 2:1 codeword interleaving. We can see that for severe error propagation cases or multi-part links, the KP4 FEC might not be able to relax DER0 to values SerDes designers require or provide the SNR coding gain that system designers want.

On the other hand, the KP4 FEC has about 100-200ns latency added to the system data path. For some low latency demanding applications, an alternative FEC that requires shorter encoding and decoding time is more attractive. In this section, we’ll explore other options including different coding schemes and even different FEC codes.  For the exploration, three coding factors will be briefly discussed, coding gain, encoder/decoder latency and complexity. Note that this paper is more focused on performance analysis while the detailed study of implementation complexity and latency is beyond its scope.

The 3rd low hanging fruit is to explore longer RS codes to improve the coding gain or shorter RS codes to reduce latency. For this paper, we studied two other RS codes besides KP4 RS (544, 514,15) code: KR4 RS (528,514,7) and Long RS (1023,967,28) both over GF(210). KR4 FEC has a lower overhead (or code rate) than KP4 FEC but with weaker error correction capability t=7. The Long RS code has a similar overhead as KP4 but longer codeword length (almost 2x) and therefore stronger error correction capability of t=28.  We expect the KR4 code has slightly shorter encoding/decoding latency than KP4 but with a significant gate and area reduction compared with KP4 due to smaller t value, while the Long RS code has 2x encoding/decoding latency unless striping over multiple lanes is implemented.

Table 5 shows FEC performance with a coding scheme of 4:1 bit multiplexing and precoding to achieve 1e-18 post-FEC BER performance for the three RS codes and different error models. Figure 21 and 22 show the trending of FLR performance vs. SerDes detector DER0 and SNR requirements for the three RS codes. We can see that the stronger error correction capability the better long burst error tolerance, of course with the cost of encoder/decoder complexity and latency. 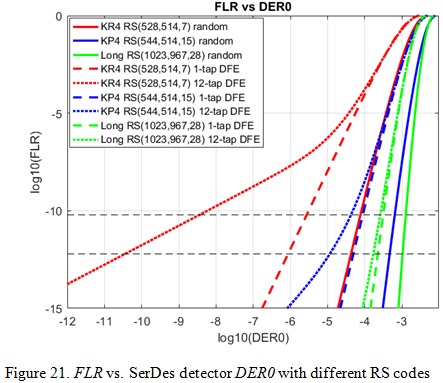 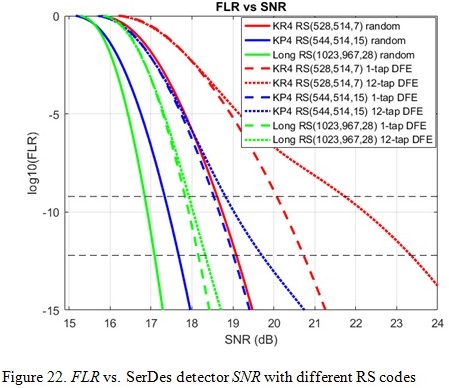 In this section, other FEC codes besides RS codes will be briefly discussed in terms of their coding gain, latency and complexity.

BCH codes are similar to Reed Solomon codes. BCH codes are a class of cyclic code [11]. The main difference is that the BCH code is over GF (2) thus it is a binary version of RS code for correcting multiple random errors. BCH codes are widely considered for applications demanding low latency since its codeword length in terms of bits is shorter than a similar RS code. However, BCH encoding and decoding complexity is nominally higher than RS codes since its computation is bit based instead of symbol based. Another disadvantage of BCH coding is its performance. It is fragile in burst channels with high DFE error propagation compared with RS codes.

To achieve complementary advantages between BCH and RS codes, we can combine those two in a concatenated code [11], a class of error correcting codes that consist of an inner code (BCH code) and an outer code (RS code). The outer code can be considered to use a KP4 type of RS code and the inner coder is a BCH code that could be short and only correct t=2 or 3 errors. By doing this, the complexity and latency is slightly higher than KP4 itself but with improved coding gain.

For an optical link that requires a high coding gain but less demands for low latency, a more advanced FEC like turbo product code, staircase code, or a low density parity checking (LDPC) code with iterative soft-decision decoding algorithm can be considered. Some of those codes can provide impressive coding gains and achieve channel capacity very close to the Shannon limit [11]. However, we believe their long latency (in the order of us or even ms) make them unsuitable for electrical links.

In this paper, high-speed serial link error propagation models and different Ethernet coding schemes have been studied and simulated to provide FEC performance analysis for 100/200/400 GbE systems with 100+ Gb/s per lane PAM4 interfaces. Different scenarios such as 1/ (1+D) mod4 precoding, PMA bit multiplexing, symbol multiplexing and FEC codeword interleaving and their impacts on overall system performance have been discussed. Multi-part link where a single FEC is shared between electrical and optical parts has been briefly studied as well. Advanced FEC schemes beyond current KP4 code are further explored.

An earlier version of this paper won the DesignCon Best Paper Award 2019.

I would like to thank my Broadcom colleagues Adam Healey and Shaohua Yang who helped me with FEC modeling and analysis through many fruitful discussions and feedbacks I also want to thank Pete Anslow from Ciena who had spent time and effort on the correlation between his results and ours for next generation 100G and 400 Gb/s Ethernet system.

What is FEC, and How Do I Use It?, Signal Integrity Journal