Signal Integrity
Gustavo Blando is a Senior Principal Engineer and leading Principal SI/PI Architect at Samtec Inc. In addition to his leadership roles, he's charged with the development of new SI/PI methodologies, high speed characterization, tools and modeling in general. Gustavo has twenty plus years of experience in Signal Integrity and high-speed circuits.

Gustavo Blando, a Samtec signal integrity architect, recently presented “DC Block Capacitor Location (Does It Matter)?” at a Samtec geEEk and spEEk webinar. Here he presents a summary of some of his key points

My high school physics teacher once told me, “If by 22 years old you haven’t discovered anything, I can guarantee you will not be a genius, but don’t despair since you can still be very experienced.”  I’m in my 40s and I have not achieved either!.

This became evident when I was thinking about the never-ending argument of where to place a DC blocking capacitor in a high-speed serial link.

There are two compelling arguments:  The first argument is, put the DC blocking capacitor close to the receiver and you’ll be good, since all of the reflections will be smaller due to transmission line attenuation. This represents a time domain view of the world.

The second argument is, for most passive interconnects, S-parameters are reciprocal (S21 = S12). Under this pretense, for a particular topology, as long as the distance from the end points to the DC blocking capacitor is the same, it does not matter if you place the capacitor at the receiver or driver, because the results will be identical. This represents a frequency domain view of the world.

If you start peeling away at the layers of this paradox, you quickly realize that this is a tricky question, and it all boils down to how you ask it. Let me explain with an example.

Let’s say we have two topologies. Both include a driver and a receiver with the same output/input impedance, a couple of transmission lines of different lengths, and a symmetrical (S11=S22) connector somewhere in the middle.

Let’s look at Topology #1 first. If we agree with the second argument, we should conclude that changing the location of the capacitor and placing it 1 inch from the receiver as shown below, should provide the same voltage at the receiver, right? 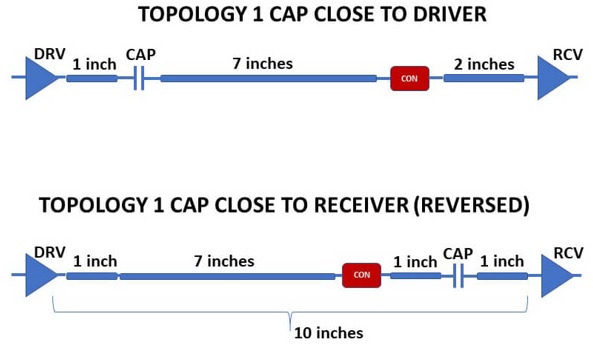 Trust me for now, but this is wrong!

Now, let’s look at Topology 2, and let’s do the same analysis.

If you trusted me before, you would conclude the voltage received at the RCV in Topology 2 and in Topology 2 Reversed would also be different, correct?

But, this will also be wrong! In this case, the results for Topology 2 and Topology 2 Reversed will be the same, meaning the voltage at RCV will be identical.

In order for those two topologies to produce the same results at the receiver, S21_Top1 should be the same as to S21_Top1R. The spatial relationship between the connector and the DC blocking capacitor changes depending on which side of the connector the DC blocking capacitor is placed. This will result in a different insertion loss (S21) between these topologies and hence the results will not be the same.

Also, in the initial formulation of the question I mentioned the connector is symmetrical (S11=S22). I will leave it to you to decide what would happen if this was not the case.