KEC designs and manufactures EMC backshells for standard circular, rectangular and “D” type connectors, as well as a range of bulkhead glands and fittings, conduit systems and cable harnesses. KEC has built its place in the market by providing quality electrical shielding between a harness system’s connectors and the cable through the use of shielded backshells and continuity between connectors and panels. But over time they began to realize that customers were buying their components and giving them to others to build complete harness systems. They responded by expanding their offerings to include the entire EMC interconnect cable harness design and build process.

As they have grown the business, differentiating themselves from the competition has become an important goal. To accomplish this, KEC is developing further expertise in the area of electromagnetic simulation of the harness systems. By modeling and simulating customers’ designs, KEC can identify problems early in the process and recommend corrections before the EMC certification stage. This enables customers to avoid costly mistakes and pass certification testing on the first try.

When researching potential unmet needs in their target markets, KEC’s team focused on the challenges their customers faced during EMC testing and certification. In addition to the demanding requirements of the defense and aerospace markets, international legislation has created rigorous specifications that challenge many other industries such as telecommunications, railroad and computing. 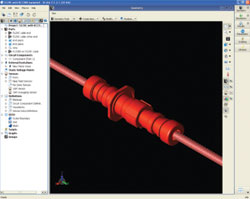 Because it is very expensive if a device fails EMC compliance and has to be redesigned and retested, manufacturers need confidence that the harness system is in compliance before integrating it into their designs and installing it into their equipment. KEC recognized that providing simulated results early in the design stage could greatly assist their customers. It also happened to be a unique technology that was not being offered by anyone else.

David Dyson, chairman at KEC, said, “We realized that we could provide a more complete solution for customers by testing the harness system first using EM simulation. The simulations demonstrate how the shielding protects the wiring and signals from RF fields, allowing us to pinpoint weaknesses if they exist. We can then help the customer to redesign until the simulation results are satisfactory. The goal is to pass the certification the first time.”

In order to implement their strategy, KEC’s next step was to shop for an EM simulation tool that they could use on their own to model and simulate the harness systems. KEC approached various providers of EM simulation software and decided on Remcom’s full-wave 3D EM solver.

Simon Ireland, design and development engineer at KEC, said, “We chose XFdtd because the product is so easy to use. The XF7 interface is intuitive, making it simple to set up complex problems.”

Several different applications were tested, based on some key customers’ specific projects. One project included both commercial and academic problems. From the academic side, a series of dipole antennas and other textbook type simulations were examined in order to compare the simulation outputs with theoretical solutions. From the practical/commercial side, a series of test harnesses were manufactured and put through EMC testing. Simulations of these test harnesses were then performed to compare the simulation outputs with real world problems (see Figure 1).

Another scenario examined the design of a folded metal backshell as an alternative to castings for low production runs. KEC had to design the metal folds in such a way that would allow the backshell to fit together, and there were several ways in which this could be achieved. By simulating the different options in XF7, a measureable difference was seen, enabling the team to choose the best design option (see Figure 2).

“Remcom impressed us with their software, specifically the ease of use, but also with the support received during the product trial,” Ireland said. “Remcom engineers provided very detailed responses to any questions I had, and I usually received a reply within a day of sending my email.”

A few select customers are currently working with KEC to use their problems as a testing ground for the new service. The team is refining the simulation process for these customers’ specific applications and comparing the simulated results with the actual equipment being tested. Response is proving extremely positive, and KEC will soon be offering the service as part of their regular product line.

“There are many benefits to including EM simulation in the typical cable harness design process that reach beyond the added value to our customers,” Dyson said. “In the EMC interconnect arena, the usefulness of EM simulation is just being discovered. It is our hope that by demonstrating the value of in-situ testing before proceeding to EMC trials, we will be at the forefront of wider industry adoption.”