Tracking Jitter and Timing Problems to their Source The Track math operator has been in use in modern oscilloscopes since 1997.  Originally developed as a method for characterizing timing jitter in system clocks, the Track is currently used in hundreds of other oscilloscope applications ranging from three phase power measurements to RF burst envelope detection, providing valuable validation and debug information when parametric results are graphed as a function of time.

Figure 1 shows a 500 MHz clock (yellow waveform) acquired by an oscilloscope.  Each of its period values is measured, and a graph of instantaneous period versus time is constructed.  The Y-axis of the Track (blue waveform) plots the measured results of period.  As an example, the first cycle of the clock waveform has a period value of 2.001 ns, and the Y-axis value of the Track is 2.001 ns for that corresponding time position.  By graphing each consecutive cycle's value as a function of time, the Track waveform demodulates each clock period, effectively extracting and plotting jitter as a function of time throughout the duration of the acquired waveform.[See video description of Figure 1] 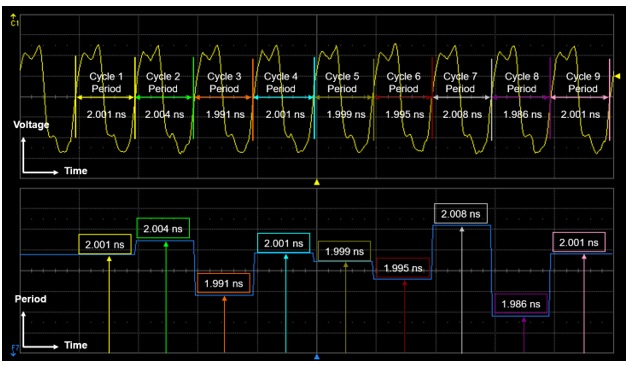 Figure 1: Tracking timing jitter as a function of time on a clock waveform

Figure 2 shows a clock waveform demodulated using the Track of Time Interval Error, a measurement of instantaneous phase change.  The demodulated clock (middle grid) indicates a deterministic shape in the clock jitter.  The power supply output voltage (lower grid) is probed simultaneously, revealing the power supply as the source of the clock jitter -- a direct cause and effect relationship identified by Tracking the problem to its source.

Figure 2:  Power supply voltage is revealed as the source of clock jitter in this system

In Figure 3, a 500 MHz clock is modulated by two low frequency modulation sources. Separating multiple sources of modulation within the time domain can be challenging, especially if the sources of modulation are complex.  A Fast Fourier Transform (FFT) makes it possible to convert a signal into the frequency domain.  Rather than applying an FFT to the input signal (yellow waveform), an FFT is instead applied to the Track of the Period (blue waveform) extracting the frequency response of the jitter, isolated from the carrier.  The FFT (red waveform) in Figure 3 identifies two specific modulation frequencies, one strong modulation component at 5 MHz and another slightly weaker contributor at 500 kHz.  By applying an FFT to the Track of the measurement of Period, FFT frequency peaks identify the specific frequencies of modulation.

Figure 3:  Applying the FFT to the Track of period of the clock reveals two modulation frequencies.

Another application for the Track is to identify the specific timing location of an anomaly.  As an example, Figure 4 shows a 10 million sample point acquisition of a waveform, which includes 999 rising edges.  Periodically, the rise time of a specific edge is slower than the others.  Measurement parameter 1 is applied to the input waveform to determine the rise time of each waveform edge.  Statistics identify that the mean rise time value is 1.292 ns, the minimum is 1.167 ns, and the maximum is 2.107 ns.  The plot of rise time as a function of time (red waveform) shows large spikes appearing at specific time locations with anomalous rise time values.  By applying the period and frequency measurements (not to the input waveform, but to the Track waveform), rise time anomalies are identified as occurring every 100.99 us, or at a rate of 9.9 kHz on the 100 MHz input signal. 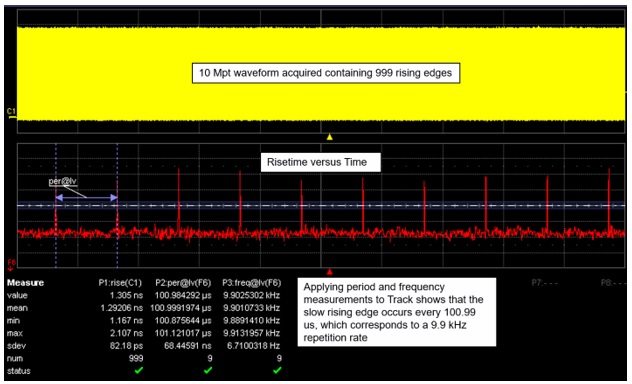 A real-world application is shown below in which a DDR clock intermittently malfunctions producing a missing clock cycle.  By applying the Track to the skew of the DDR strobe and clock waveforms, the missing clock cycles were identified, allowing root cause and effect analysis to be performed on the DDR system.

The Track measurement operator on oscilloscopes can be used to identify timing issues in multiple ways.  By demodulating sources of jitter, the underlying shape of the modulation sources can be revealed.  Combining the FFT with the demodulated waveform will identify the specific frequencies of modulation.  A Track can also be used as an anomaly-finding tool, in which the Track points to the specific time location in which an anomaly has occurred.  In addition to identifying instantaneous noise, a Track can also be used to identify jitter sensitivities.