Home » How Not to be Confused by S-Parameters
Signal Integrity

How Not to be Confused by S-Parameters S-parameters have a rich mathematical formalism in which there is no ambiguity. But when it comes to translating the mathematics of S-parameters into the practical interpretation of an interconnect’s electrical properties, confusion can slip in by way of an inexperienced user spreading misconceptions to a new user not sure what is important and what is not. In this article I reveal seven features of S-parameters that are confusing and how not to be confused.

Fundamentally, an S-parameter, short for “scattering” parameter, is a measure of the ratio of the scattered voltage wave to the incident voltage wave to a device under test (DUT).  The formalism was originally established in the frequency domain, where the voltage waves are sine waves.

The ratio of what comes out compared to what goes in, is basically a transfer function. It describes the response of the system to sine waves. A sine wave has only three figures of merit:

When we measure the response of an interconnect to sine waves, we are assuming the interconnect satisfies three important properties:

We can plot the value of the complex number across the frequency range in one of three ways: as real and imaginary, in polar plot, and as magnitude and phase. These three examples are shown in Figure 1. Each of these plots is the same data, just displayed differently. This is sometimes a source of confusion.

Figure 1. Measured return loss of an interconnect open at the far end. The reflection makes all the energy return except for the losses in the line.

Ports  are the connections to the DUT into which, and from which, we measure the sine wave signals. The way to think about a port is that it is like a coax connector with a specific characteristic impedance and a connection to BOTH the signal and return path of the DUT, like shown in Figure 2.

If you don't engineer the connection to the return path, the signal will find a path and you may not like the path it finds.

The impedance of the port is as important influencing the S-parameters as the DUT. This is why it is important to know what it is. Unless there is a strong compelling reason, always use 50 Ohms. If another port impedance is used, it will be captured in the Touchstone file, but the shape and patterns will look different.

When we have multiple ports to the DUT, we identify them with unique consecutive index numbers starting at 1.  In principle, the index numbers of the ports connected to the DUT don’t matter as long as we are consistent in how we use them. In practice, I find this one issue to be the major source of misinterpreting S-parameters.

The port index numbers are important because this is how we label each S-parameter term. With four ports on the DUT, for example, there are 16 combinations of a going in and a coming out. Data management is a surprisingly important aspect of using the S-parameters of a channel.

If you hear someone referring to S21 as “S twenty one,” assume this person does not have a clue about S-parameters and be wary of accepting what they tell you.

If the DUT has one port or two ports, there is only one way of assigning the ports. But, if there are four ports, there are multiple possible assignments. Figure 3 shows two possible labeling options for a 4-port DUT. 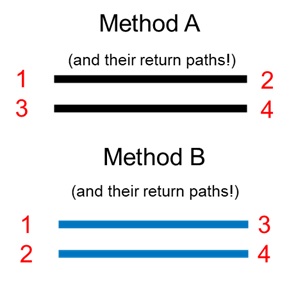 Which port assignment used makes a difference. If Method A is used, an insertion loss is an S21. If Method B is used, an insertion loss is S31. If your S-parameter model is used in a circuit simulation and you do not look at the files, you will get simulated results, but they will be wrong. If you even notice the simulation looks off, you may waste hours of head scratching trying to rationalize the results.

The way to tell which port assignment your S-parameter model uses is to look at a column of S-parameters. Figure 4 shows examples of the worst performing interconnects I could find, with different port assignments. If S21 looks like an insertion loss, starting at 0 dB at low frequency and monotonically dropping off, then the port assignment is Method A (right). If it’s S31, it’s Method B (left). Either way, the insertion loss is easy to distinguish.

A few minutes upfront checking will save you hours of frustration later.

These are just some of the confusing aspects of S-parameters that have nothing to do with how we interpret them, just about how we use them. Now that you are aware of these potential potholes, you can avoid them when you look at your S-parameters.

What Does it Take to Be a Successful SI, PI, or EMC Engineer?

A New Look For S-Parameters