In today’s competitive electronics industries, reliability is essential for applications that use microwave/RF cable assemblies to ensure consistent, repeatable measurements and to maintain electrical performance over time. Therefore, cable assemblies must be durable enough to withstand continuous movement, flexing and exposure to environmental conditions while still maintaining reliable electrical performance.

A recent study1 showed that globally more than 75 percent of microwave/RF cable assemblies are replaced frequently (see Figure 1). These assemblies were replaced for a variety of reasons, including damage during installation or use, poor quality construction, connector termination issues or failure when exposed to outdoor environmental conditions. However, the most common reason by far was damage during installation or use. The study found that overall, 36 percent were replaced once a year and 20 percent were replaced at least twice a year. As a result, equipment manufacturers are experiencing delays in production schedules, increased troubleshooting and maintenance, more frequent calibration, additional retesting, compromised system performance, and higher overall costs to purchase replacement assemblies.

In addition, the impact of replacing cable assemblies varied in different regions. The study showed that in the United States, 70 percent of equipment manufacturers are replacing their cables frequently, with 35 percent being replaced at least once a year and 12 percent being replaced once a quarter.In Europe, 49 percent of equipment manufacturers had to replace their cables once a year. However, the most significant impact was in Asia Pacific with 32 percent of cables replaced once a year, 21 percent replaced once a quarter, and 11 percent replaced at least monthly. The study further indicated that the industry expects
microwave/RF cable assemblies to last a very long time — years rather than months, even lasting longer than the life of their system. 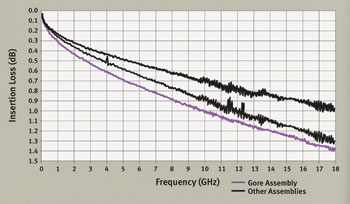 W. L. Gore & Associates (Gore) evaluated the durability and performance over time of several microwave/RF cable assemblies typically used in the industry. The cable assemblies selected were described as having a ruggedized construction (including GORE® PHASEFLEX® Microwave/RF Test Assemblies). While many cable assemblies perform well out-of-the-box (see Figure 2), the study wanted to evaluate how cables with similar specifications performed after repeated use, and whether their performance changed or remained stable.

When tested under the same criteria, the results2 showed that the failure rate of cables across the industry varied significantly. For example, in an accelerated life test simulating real-world conditions such as flexure and handling, some cables failed in less than 25 days, but others continued to perform after seven years. The testing also showed that the internal construction of some cable assemblies physically changed (i.e., stretched and distorted) after repeated use, which compromised their electrical performance. However, others performed significantly better over time without any physical changes, which means that these cable assemblies maintained electrical integrity in environments where the others failed (see Figures 3 and 4). 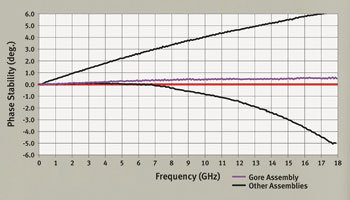 It is important to consider the cost implications when selecting the right cable, as the consequences of cable failure and replacement can be quite high. The total cost of ownership should include installation, maintenance, manufacturing downtime and replacement cables. So, how much money can you really save by making purchasing decisions based solely on the initial price of a microwave/RF cable assembly?

Based on this testing, one could spend more money and resources in replacing lower-cost cables that do not survive the test of time. Using a real-world example, assume a system requires four cables, and you are using cables that are replaced every 25 days. Over the ten-year life of the system, you will be purchasing approximately 600 new cables. If the average cost of a cable is between $200 and $400, it will cost between $120,000 and $240,000 to replace the cables over 10 years.However, if the cables used last more than seven years, then they would only need to be replaced once.

And these totals do not include the additional costs due to downtime, maintenance, recalibration and retesting. In some industries, these additional costs can far exceed the direct purchase cost. For example, a chip manufacturer has estimated that its downtime costs can exceed $50,000 per hour. Therefore, one should complete a similar cost analysis to consider the full impact of cable failure and replacement before selecting microwave/RF cable assemblies. 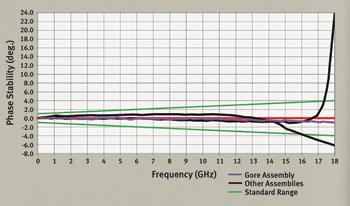 It is critical to select a cable manufacturer that understands the challenges of the application, because demanding environments can easily compromise a cable assembly’s signal integrity, reliability and performance over time. Therefore, it is important to evaluate the electrical, mechanical, and environmental challenges that will affect an assembly’s performance in the specific application. Some key things to consider when selecting microwave/RF cable assemblies include:

Having to replace cable assemblies frequently is costly. Not only does the overall purchasing cost increase, but companies can often experience a much greater impact from delayed production schedules, compromised system performance and additional retesting and calibration. The out-of-the-box performance of microwave/RF cable assemblies does not necessarily ensure reliable performance over the lifetime of a system. Choosing a cable assembly with a durable construction that has been tested to survive real-world conditions is the key to reducing replacement costs and the only way to ensure reliability over time.