How do you achieve high bandwidth in your measurements while minimizing current load on your DUT? Given that your DUT is a power rail, you really don't want to draw too much current from it., or your measurement system will distort the rail. But these two measurement criteria are at loggerheads with each other. It's a quandary, and it has to do with the fundamental nature of signals on interconnects.

Let's say you have a coax cable on your probe. Your oscilloscope's input impedance is 1 MΩ, and you're probing a power rail with low impedance. If any transient should be launched from that rail into your probe, it first encounters the 50 Ohm transmission line of your cable. The signal propagates down the cable and then sees the 1 Meg Ohm, high impedance of the scope input. The signal will immediately reflect back down the cable and see the 1 Ohm source impedance of the rail.

When it reflects from this low impedance, compared to the 50 Ohm cable, the sign of the signal will change and most of it will reflect back down the cable to the high impedance input of the scope. There, it will reflect again, and so on.

The frequency of the ringing will depend on the length of the coax cable. If you wanted to push the ringing frequency above and beyond the bandwidth limits of your, say, 1-GHz oscilloscope, you'd need that coax cable to be so short that it would be impractical. It'd need to be less than 2" long. Any longer than that and you're going to see artifacts of that ringing on your display if you're using the instrument's full bandwidth.

Generally, you want to use a coax cable that is conveniently 3-6 feet long. Whenever you have an impedance mismatch between the oscilloscope's 1-MΩ input impedance and the impedance of the power-rail DUT, you will also have reflections and consequent ringing. As a result, the highest bandwidth you can measure to without artifacts is going to be lower than 50 MHz. 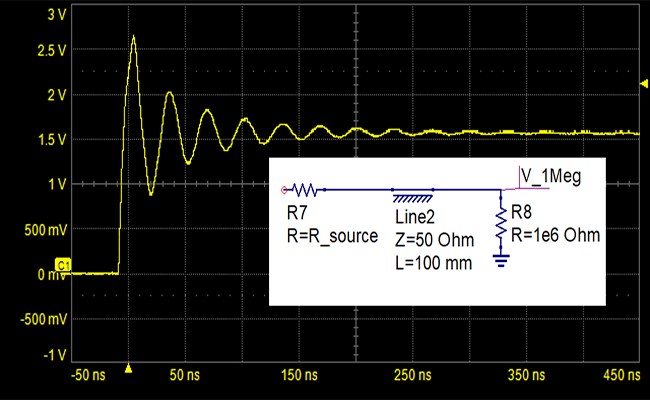 Figure 1: An example of ringing from a low impedance 1.5 V rail and the 1 Meg input impedance of the scope

How can we get around this ringing problem? Simple: We use a 50-Ω input termination on the oscilloscope input. Such terminations are designed for just this purpose, to terminate reflections in the cable.

But here lies the quandary. If you use a 50-Ω input termination on the oscilloscope, that makes the DC load on the power rail 50-Ω that can draw more current than you might want. In addition, if the rail voltage is more than 5 V, like a 12 V rail, you will burn up the 50 Ohm resistor inside the scope and let all the magic smoke out.

Plan B, then, is to use a 10X attenuating probe. It's got a 10-MΩ load to the rail, so it won't load down the rail. But we also know that the 10X probe is going to rob you of 20 dB of SNR. It's not uncommon for people to use a 450-Ω series resistor at the tip of a 50 Ohm cable to make a "roll-your-own" 10X probe. The DUT sees a load of 500 Ω, and the coax still has its 50-Ω termination at the scope end, so they're both happy. But again, we've introduced 10X attenuation and have sacrificed SNR on the altar of impedance matching.

Thus, the bottom line here is that using a coax cable connected to the DUT gives us the ability to measure high bandwidths, but to do so, the cable wants to see a 50-Ω load at the scope. But in turn, that loads down the power rail and essentially bars us from probing a power rail carrying more than 5 V. A new solution is needed that is a better balance of the conbstraints. Sometimes, you just have to observe speed limits when you drive, too, and that's life.