The New Touchstone Specification 3.0 Awaits for Your Input

If you use or create S-parameters for signal integrity applications, you use the Touchstone format to store your data. The Version v3 .0 is in the works. Now is the time to provide your input on what you would like to see.

The first automated network analyzer was the Hewlett Packard HP8410A, introduced in 1968. This was a 2-cabinet system with an HP8410 network analyzer and HP2001A computer with a CRT screen, teletype, 32k memory and a 5 MB disk drive with paper tape reader and puncher. It revolutionized how return loss was measured and could automatically plot a Smith Chart.

By 1984, this evolved into the HP8409B Network Analyzer, shown in Figure 1. It could fit on a lab bench, though a very sturdy one. The next year, the HP8510A was introduced, a single rack VNA system that could provide S-parameter measurements from 45 MHz to 26.5 GHz in one sweep. Suddenly S-parameters were flooding out of the instrument. 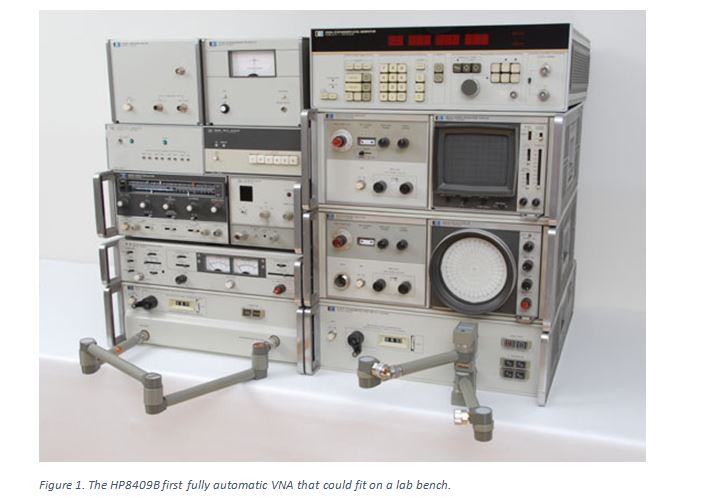 At the same time EEsof was started by Charles Abronson and Bill Childs to develop high frequency circuit simulation tools. Their first product was called TOUCHSTONE which later evolved into Libra. By 1987, they incorporated an interface to communicate directly to the HP8510 and bring measured data into their TOUCHSTONE simulator environment in a text format.

This text format that could be read by the TOUCHSTONE software, was referred to as a Touchstone format. After Hewlett Packard acquired EEsof in 1993, which became part of the Agilent spin-off in 1999, Agilent, became the owner of the Touchstone format. With their adoption, it became the defacto industry standard.

Just what is the Touchstone format?

It is basically a text file structure to store frequency dependent complex matrix elements, literally in a few columns of numbers.

Each row has a frequency entry and the complex values of each row element, as either a real and imaginary value or magnitude and phase. At the top of the file is some header information. An example of a Touchtone formatted file storing S-parameters is shown in Figure 2.

In 2002, the EIA/IBIS Open Forum took over the ownership of the Touchstone format and wrote the very first documented spec. However, it was never ratified and so the draft of Version v1.1, release on Oct 1, 2003, remains as a baseline spec.

This document called out the use of this file format to store not just S-parameter values but other complex matrices, such as Y and Z matrices. In principle, ANY frequency dependent complex matrix can be stored in this format. The spec has key letters assigned to these specific electrical properties:

In the header, any line beginning with a ! is a comment.

The only line that is read by a parser is the line that begins with a hash mark, #. The Touchstone spec calls out the specific letters and values to designate the units for the frequency column and the units for each of the complex numbers. The last value is the reference impedance of the ports, as a positive number, the default being 50 Ohms. It assumes the same value is used for each port. The format is:

For 2-port data sets, the specific order of the columns, for example, is:

The first spec that was actually ratified was Version v2.0, release by the IBIS Open Forum on April 24, 2009. “There were many additions in the new spec over the original v1.1,” Mike LaBonte, outgoing Chair of the IBIS Open Forum said in an interview. “But three are significant.”

The Version v2.0 format includes values for specific keywords using brackets to identify the keyword, [keyword name] followed by the argument, such as :

Version 3.0 on the Horizon

“The adoption of the Touchstone v2.0 spec was not what we thought it would be, “ LaBonte  said.

The v1.1 format is very stable and well suited for 2 or 4 port S-parameters which is the most common format exported from and used by instruments. The hardware and instrument user community had not been as vocal on offering suggestions for changes.

As the IBIS Open Forum group enters the phase of drafting the Version v3.0 spec, they want to broaden the audience providing inputs beyond the IBIS community. Last month LaBonte sent out a questionnaire soliciting feedback on the current Touchstone Version v2.0 format and what changes users would like to see. They expect to publish the results in the next few months.

In the meantime, the IBIS Open Forum group would like to hear from more hardware engineers. “What features would an engineer dealing with measurements like to see in the Touchstone format?” LaBonte said. “For example, would port or pin names be added in addition to port numbers? Should sparse matrices be allowed to further cut down the file size? The one message we heard loud and clear is keep the format human readable.”

If you have a suggestion for the IBIS Open Forum group for what you would like to see in the Touchstone Version v3.0 spec, drop them a line at touchstone@IBIS.org, with your comments.

Good Ones.Both on 3D Printing as well as...