above which it acts as an inductance. Other important contributors to the parasitic inductance are ESL and plane spreading inductance.

With two capacitors in parallel, we can generate a negative coupling coefficient to reduce the parasitic inductance. This is shown in Figure 1. Points A and E are on the same plane and points B and F are on the same plane. Assume that the planes are power and ground separated by thin dielectric of thickness (2-3 mils).

Figure 2 shows the equivalent circuit diagram of two capacitors in parallel. Writing equations for it, 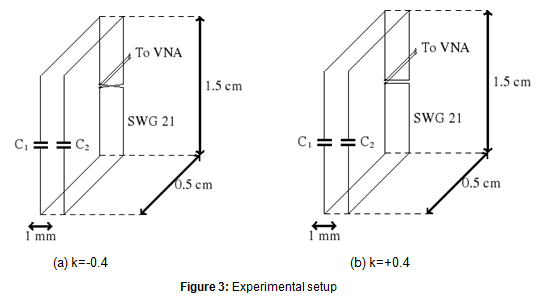 For large values of w, the Eq. 2 becomes the classic equation of coupled parallel inductors.

where + and - signs indicate positive and negative couplings. For equal loop areas (L1 = L2 = L), inductance is given by,

Experiments are conducted with two ceramic disc type capacitors of values C1 = C2 = 4.7 nF. Measurement with a capacitor meter gives their values as 4.30 nF. The leads are cut and made with insulated copper wire of SWG 21 (diameter = 0.813 mm). Leads make a loop of area 1.5 cm _ 0.5 cm. The measurement device is Rohde & Schwarz vector network analyzer (VNA). The scattering parameters measured are converted to impedance values. VNA is set with the following values: Resolution band width (RBW) = 10 Hz; number of points = 1000; and power = -15 dBm. Two loops are kept at a distance of 1 mm (edge to edge). The coupling coefficient between the loops (k = M/L) is calculated to be 0.4 where L is 17.6 nH and M is 6.97 nH [2]. Simulation and experimental results are shown in Fig. 4(a) and Fig. 4(b) respectively. At 100 MHz, inductance is 2.5 times (8 dB) lesser than that for positive coupling case. 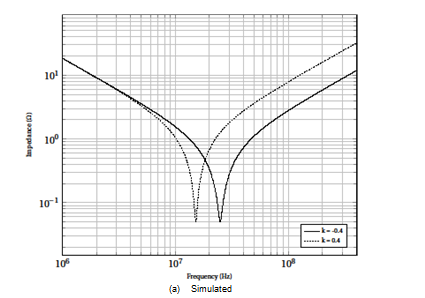 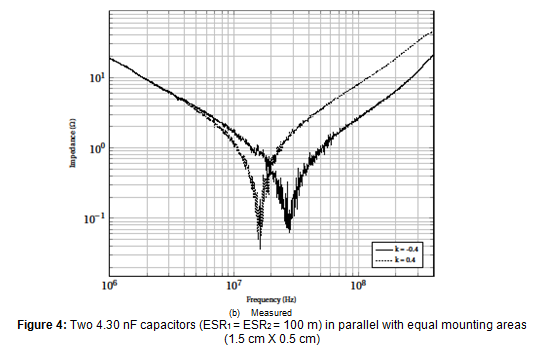 No surprises until here. How about the case where the two capacitor values are different?

When the capacitor values are different, the parallel combination produces antiresonance peaks as shown in Figure 5. The anti-resonance peak is lower for the positively coupled case. It is assumed that the capacitors have nearly equal mounting inductance, and their sizes are comparable. Experiments are conducted for the same values of the previous experiment, except that one capacitor is changed to 390 pF. A measurement with capacitance meter gives 380 pF for this capacitor. Experimental results (Figure 5(b)) shows that the antiresonance peak is lower for positively coupled case by 3.2 times. When both the capacitors become inductive, the equivalent inductance is lower for negative coupling case. 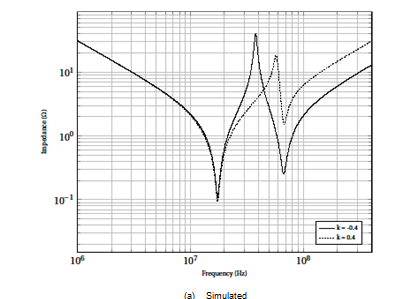 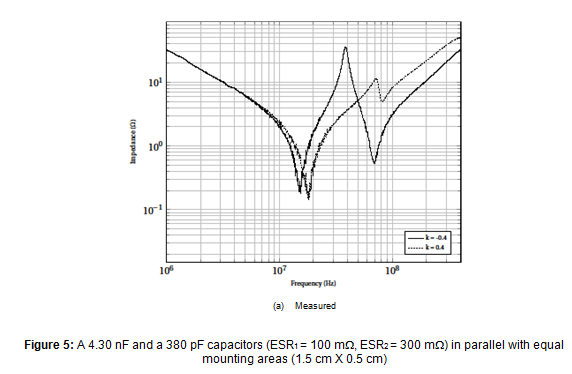 A negative coupling coefficient produces a larger anti-resonant peak compared to a positive coupling coefficient, even though the equivalent inductance is lower. Multiple anti-resonant peaks are capable of generating rogue waves [7, 8], and suppressing them are becoming more and more important. For low noise circuits, power distribution network (PDN) resonance is an important design issue, and should be suppressed!

How about the tolerance of two identical ceramic capacitors connected in parallel? `It depends' on the type of capacitors that determines the capacitance variations. Plotting eq. (2) with worst-case values will give the answer. Authors leave this to the curious reader to explore!