Few topics are as fundamental in signal integrity and create as much confusion as signal bandwidth. What exactly does bandwidth refer to and what features in the time domain influence bandwidth; rise time or slew rate?

For the two waveforms in Figure 1, what are their bandwidths and which waveform has the higher bandwidth? The answer may surprise you. This is an important question because it applies to all analysis in the frequency and time domains for both simulation and measurement. 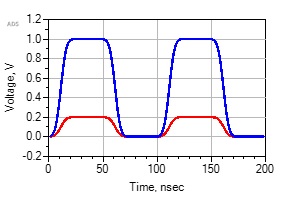 Fig.  1 Two waveforms have the same rise time but a factor of 5 different slew rate. Which one has the higher bandwidth?

While the term bandwidth is used when referring to the frequency components of a signal, it has an ambiguous definition that must be clarified before it can be applied to help gain insight into its relationship with rise time and slew rate. Bandwidth is, fundamentally, the frequency range of a signal’s “significant” spectral components.

When applied to RF signals, this is generally the range of frequency components in the spectrum about the carrier frequency and is often categorized as narrow band or wide band. For digital signals, since their frequency range starts at DC, bandwidth refers to the highest sinusoidal frequency component of the signal that is “significant.” The ambiguity is in the definition of “significant.” Just looking at the spectral components of a time domain signal in the frequency domain is not enough to answer the question “what is significant?”

A time domain signal is generally transformed into the frequency domain with a Fast Fourier Transform (FFT), which is a fast matrix solution of a Discrete Fourier Transform (DFT). This changes a time domain V(t) waveform into a frequency domain spectrum consisting of a complex sinusoidal amplitude in each spectral frequency bin, A(f). Only the magnitude of the complex amplitude is generally displayed, but there is an associated phase as well.

The FFT of an ideal sine wave in the time domain yields just one sinusoidal frequency component, the sine wave’s frequency. For example, the spectrum of three ideal sine waves at 10 MHz, 100 MHz, and 1 GHz calculated with the FFT function in Keysight’s Advanced Design System (ADS) is shown in Figure 2. The time base is 1 usec and the sample interval is 5 psec for a resolution of 1 MHz. The  highest displayed frequency is 100 GHz. For this example, a Blackman-Harris window is used in the FFT. 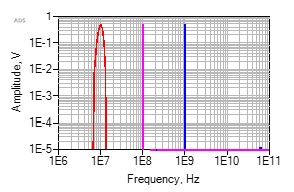 Fig. 2 Simulated FFT of three ideal sine waves each with an amplitude of 0.5. Note the resolution is 1 MHz.

One of the few waveforms that allows pencil and paper calculation of an FFT is an ideal square wave. The spectral components are multiples of the repeat frequency, the fundamental. Each multiple of the fundamental is a harmonic. Their amplitudes drop off as 1/n and are related by:

A(n) is the amplitude of each frequency component and n is the harmonic number, a multiple of the first harmonic frequency.

In the special case of a perfectly symmetric square wave, all the even number harmonics in the spectrum cancel out and are numerically equal to 0. Any asymmetry between the first half and the second half of the waveform creates some even harmonic components. A second harmonic component in the spectrum of a periodic square wave-like waveform means that the measured square wave has some asymmetry between the first and second half of its period.

Fig. 3 An ideal square wave's spectrum compared with the analytical model and the impact of a slight asymmetry in the waveform.

From the spectrum of the ideal square wave, how is bandwidth defined? The frequency components drop off in amplitude by 1/f and become arbitrarily small. Below what amplitude are the frequency components insignificant?  One must be careful applying a definition such as the 3 dB bandwidth (the frequency at which the amplitude is down by 3 dB). This is simply an amplitude drop to 70 percent of the starting value. The first harmonic is already down to 63 percent of the peak-to-peak value of the square wave’s voltage. The third harmonic is down to 33 percent or almost – 10 dB from the first harmonic. This is for an ideal square wave with a 5 psec rise time in this example.

Another way of evaluating the bandwidth of a signal, the highest significant sinusoidal frequency component, is to synthesize a square wave with a finite rise time and an unambiguous bandwidth. A square wave can be created by successively adding together each frequency component from its ideal spectrum, starting with the lowest harmonic, one at a time.

Multiple sine waves of different frequencies can be simulated in the time domain and added together using a simple circuit with ideal sine wave voltage sources in series. Using the analytically calculated amplitudes of an ideal 100 MHz square wave, Figure 4 shows the circuit and the resulting time domain waveforms for the first 17 harmonic components added together. The fundamental is 100 MHz and each harmonic is a multiple of 100 MHz. The amplitudes of the even harmonics are 0. As higher frequency components are added to the waveform, the rise time of the resulting signal decreases; they are inversely related.

Fig. 4 Example of part of the circuit used to add together sine wave frequency components in Keysight's ADS and the resulting synthesized waveforms.

For example, the waveform with the first 17 harmonic components and the resulting spectrum of this time domain waveform are shown in Figure 5. The bandwidth of this waveform is engineered to be 1.7 GHz.

Fig. 5 The center portion of the waveform containing the first 17 harmonics of an ideal 100 MHz square wave (a) and the engineered spectrum (b). Note the bandwidth is exactly 1.7 GHz, with no ambiguity. This is the highest sinusoidal frequency component in the waveform.

This ADS simulation can be used to perform a simple numerical experiment in which the 10 to 90 percent rise time of each engineered waveform is compared to its engineered bandwidth. The relationship between the 10 to 90 percent rise time and the engineered bandwidth is shown in Figure 6 compared to the commonly used approximation, RT = 0.35/BW. Rise time and bandwidth are inversely related. A useful figure of merit for this relationship is the rise time-bandwidth product. In this numerical experiment, each term is unambiguously defined. This product, as the harmonic number is increased, is also shown in Figure 6.

The data points plotted in Figure 6 show a purely empirical relationship based on a numerical experiment that unambiguously defines the highest frequency required to replicate a specific rise time. The value of the rise time-bandwidth product depends strongly on the precise shape of the rising edge.

The commonly used model relating rise time and bandwidth is a good approximation for the results of this numerical experiment, however, it is only an approximation. This model is derived based on the ideal step response of a 1-pole filter. In this model, the 1-pole frequency is “arbitrarily” defined as the bandwidth of the signal. In comparison with the unambiguous definition of bandwidth based on the empirical experiment, this assumption is reasonable. The rise time-bandwidth product in the empirical experiment ranges from 0.2 to about 0.42. The value of 0.35 for the 1-pole model is an approximation that fits within this range.

Back to Basics: Bandwidth and Rise Time