Just How Fast is GaN Fast?

I recently designed an ultra-high speed, low-impedance pulse generator (Figure 1). I wanted it for evaluating oscilloscope probe performance [1], [2] and for determining the feasibility of an in-socket load for ASIC emulation. The obvious choice, due to size and desired performance, was an eGaN FET. One of the devices I used is an EPC2037, 0.9 mm device. As it turns out, the hard part wasn’t designing the pulser, but determining just how fast the pulse is and whether the pulse itself introduces ringing. In case I didn’t mention it, the eGaN device is also a flip chip, so there is no access to the device solder bumps once it’s installed.

Figure 1: The Picotest J2152A ultra-high-speed, low impedance pulse generator and a passive probe measurement at each of the programmable voltage settings. This is great for measuring the bandwidth of and resonant Q of a typical probe, but just how fast is the pulse generator? Does it ring?

The concept was simple enough: use the pulser to evaluate the bandwidth and ringing of a scope probe, and then measure the actual edge-speed and flatness of the pulse. In reality, it proved to be much more difficult.

My first effort was to use the “best-in-class” Tektronix, P6150, 500Ω, 9 GHz passive probe. I had to slightly modify the pulse generator pull up circuit to drive the low impedance probe. The resulting edge speed, accounting for the 8 GHz oscilloscope (43ps rise/fall time) and the 9 GHz probe speed (39ps rise/fall time), is 169ps (Figure 2). That’s a great result, but is it right, or is it further limited by the tip leads of the probe? And did the pull-up modification also impact the result? 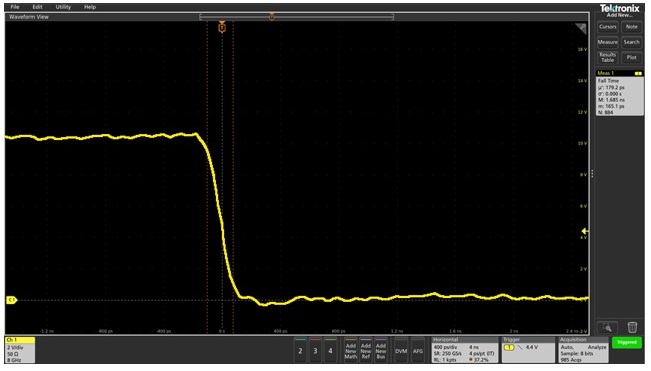 Figure 2: The measurement of the Tektronix P6150 9 GHz probe indicates a 179 ps fall time. There is no ringing, preshoot, or overshoot observed. The 179 ps accounts for the probe pulser, the probe and the oscilloscope rise times. De-embedding the scope bandwidth and the specifed probe bandwidth results in 169 ps fall time, meeting our 175 ps goal.
In a second attempt, I created an 18GHz custom “air-probe” for non-contact measurement (Figure 3). The air probe measures radiated emissions within the 2 mm diameter of the probe. In 2015, I published an article [3] about measuring GaN, and proposed such a non-contact method. 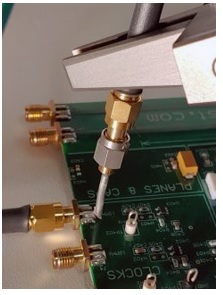 Figure 3: A custom made “air-probe” is used for non-contact measurement of a clock buffer on the Picotest VRTS3 demo board. EMI radiated by the PCB trace is absorbed by the cavity waveguide of the probe.

The direct measurement of the fall time, shown in Figure 4 is 373ps, while the “air-probe,” measured using the integration math function indicates 411ps. That’s within about 10 percent, and also on the conservative side. 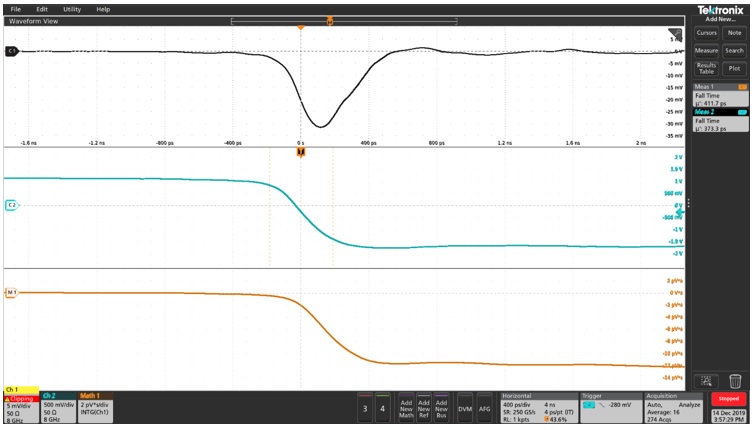 Figure 4: The actual fall time of the pulse is measured directly, using a 50 Ohm oscilloscope input, and shown in the middle trace. The “air-probe” measurement is shown in the upper trace and the integrated pulse reconstruction is shown in the lower trace.

Moving on to our desired measurement, the probe was placed directly over the center of the GaN FET and the dV/dt was detected from the “air-probe.” Integrating the dV/dt results in a picture of the time domain response. The oscilloscope fall time can then be displayed using the built-in 90%/10% fall time measurement function within the oscilloscope. The response shows a relatively flat response, 138.9ps fall time (Figure 5). 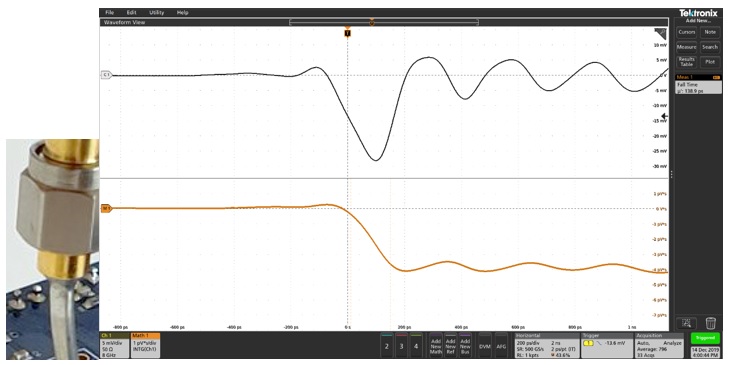 Since we measured the “known” within 10% accuracy, it might be reasonable to assume this 139ps measurement to be valid. For validation purposes, we asked Langer EMV, a company that specializes in this near field extracted measurement, to use their own equipment to validate our measurement.

Having our probe measurement validated by Langer EMV provides confidence that this 139ps fall time is correct, and this is likely the fastest GaN power FET ever recorded. This also validates my 2015 paper suggesting that this would likely be the best method of measuring ever faster GaN switching devices.

The MFA probe is a more precise, and amplitude-calibrated, probe compared against my “air-probe,” though both probes agreed on the fall time within 1.5% accuracy.

I want to personally thank Susanne Kaule and Philipp Günther from Langer EMV for performing this measurement.