Anyone who has done spectral analysis of signals knows how valuable a spectrum analyzer is. But, Lee Hill, founder of Silent Solutions LLC & GmbH,  points out, traditional swept-tuned EMI spectrum analyzers and step-tuned EMI receivers may produce misleading or entirely false measurement results when the signal under study is not steady state, but transient. This is the case when trying to debug the source of an EMI transient or when multiple sources at exactly the same frequency are present.

Lee presented a series of hands-on demos as part of the live demo session at the 2017 IEEE EMC Symposium in Washington, DC. 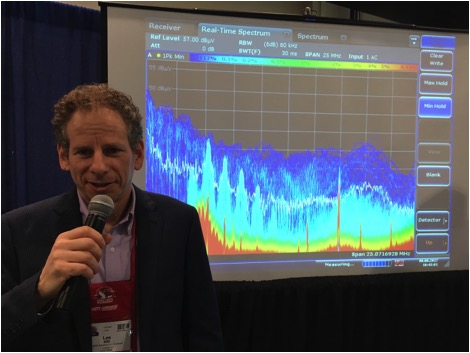 Traditional EMI spectrum analyzers use a narrowband tuned front-end amplifier which is swept over a wide frequency range. When set for high resolution (narrow bandwidth), one sweep can take 5 to 10 seconds. Long sweep times are bad for troubleshooting; the noise sleuth wants to see the instantaneous response of a circuit as he/she alters the circuits geometry, adds a filter or shield, etc. Without this instantaneous feedback, the displayed spectrum can be impossible to properly interpret.

Lee, a regular crowd pleaser with his live demos, showed how a real-time spectrum analyzer which measures signals in the time domain, processes and displays the signals with a hardware-based FFT in real time. As an added bonus, a colorized “persistence mode” gives a third dimension of signal statistics, telling the user not only the amplitude and frequency of the noise signal, but also how often it appears as a function of time. This enables the instrument to simultaneously display two different signals that occur at the same frequency, often referred to as “signal under signal.” This means we can track a dynamically changing spectrum in challenging measurement environments.

“When I make changes to the device under test,” he says, fiddling with a connection to a motor PWM driver, “I can see in real time, what part of the spectrum is affected. This speeds up my debug time by an order of magnitude.”

Lee demonstrated using a current probe to measure the common-mode currents on the outside of the cable of a USB peripheral, a motor controller and a small digital circuit board. When displaying the common-mode current spectrum with a traditional swept-tuned spectrum analyzer, it’s common to see a spectrum display that is non-intuitive and that does not reveal the presence of multiple physical sources producing noise at a single frequency. When the time domain signals are changing, so is the spectral content. A frequency swept or stepped front end just can’t capture this dynamic information, Lee says. That’s where a real-time FFT feature is so valuable. By quickly modulating the source of the interference, he was able to show how some features of the spectrum were also modulated, in real time.

In addition to all the usual information obtained with a swept spectrum analyzer, the real time scope/spectrum analyzer also gives the dynamic spectrum, so important for transient signals especially in the debug phase.

This was one of the many live demos Lee shows to illustrate EMC principles in his live short courses, either as on-site or as public classes he conducts around the world. He is also an adjunct professor at the Worchester Polytechnic Institute where he is teaching a graduate class in EMC.