The waveforms demonstrated in this application note are useful for a variety of applications ranging from ultrawideband (UWB) imaging to data communications.

Starting with a 20 ps full width half max (FWHM) single-ended positive impulse, a UWB monocycle is generated. First, HL9404 broadband balun is used to create a differential impulse. Next, the negative impulse is delayed by 20 ps and added to the positive impulse using an HL9474 resistive power divider (see Figure 1). The measurements of the various pulses made by the block diagram in Figure 1 can be seen below (see Figures 2 to 5). 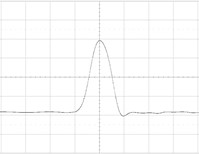 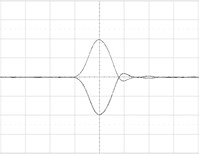 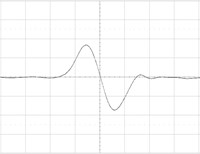 Using a resistive power divider, a narrow impulse can be added or subtracted from a rectangular pulse to create various waveform defects, such as precursor, overshoot and trailing edge undershoot. The techniques demonstrated below can be used to pre-distort waveforms and compensate for distortion products generated elsewhere in the system.

Once again, the HL9404 broadband balun was used to create a differential impulse. The HL9462 Z-matched pick-off tee was used as a weighted (unequal) summing network (see Figure 6).

A 20 ps wide negative impulse was summed with a 200 ps wide rectangular pulse to create the first series of pre-distorted pulse waveforms. Each pulse source was set to 400 mVp-p amplitude and 200 MHz repetition rate. The input pulses are shown in Figure 7 and Figure 8. The relative delay between the impulse and rectangular pulse generators was adjusted to position the effect of the impulse at various locations on the rectangle pulse.

The single-ended insertion loss of HL9404 broadband balun is typically 6 dB. The pick-off port of HL9462 typically has 10.5 dB loss compared to 3.5 dB loss at the thru port, a difference of 7 dB. The impulse is thus attenuated by ~13 dB relative to the rectangular pulse (6 dB in the balun and 7 dB in the pick-off tee) resulting in ~20 percent precursor (see Figure 9). By increasing the relative delay of the impulse generator, the negative impulse can be re-positioned to give an interference drop-out in the middle of the rectangle pulse (see Figure 10), or a trailing edge undershoot (see Figure 11). 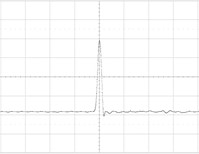 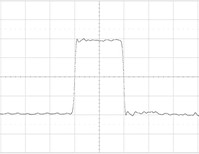 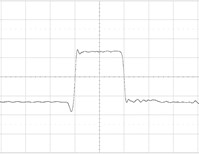 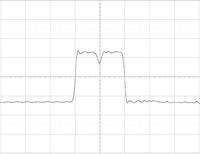 To generate positive going aberrations on the rectangle pulse (see Figures 12 and 13) the generator is simply re-configured connecting the positive output of the balun to the pick-off port (see Figure 14). 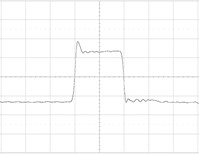 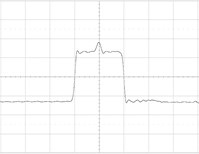 A noise like pulse (NLP) is generated by summing a relatively high amplitude and narrow impulse on top of a rectangular pedestal or lower bandwidth gaussian pulse. For this demonstration, an HL9474 6 dB power divider is used to sum the two input signals. A 6 dB attenuator is inserted in the path of the pedestal pulse to give the impulse 2x weighting over the pedestal.

Later in this application note, similar 2x weighted summation functionality is demonstrated using the HL9462 Z-matched pick-off tee without need for an external attenuator. A block diagram of the NLP generator system is depicted in Figure 15.

The input signals are a 20 ps FWHM impulse and a 500 ps wide rectangular pulse, both running at 200 MHz repetition rate (see Figure 16).

First, the signals were added without a lowpass filter in the system, resulting in a rectangular pedestal NLP (see Figure 17). 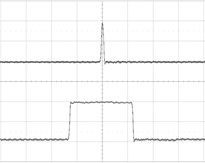 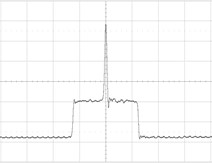 Next, an HL9452-200 risetime filter was inserted in the path of the pedestal pulse. The HL9452-200 is a transition time converter. It converts the fast risetimes and fall times of the rectangular pulse source into 200 ps transitions, 10 to 90 percent, (see Figure 18 for result). 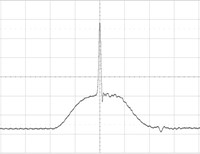 Two binary serial data streams can be summed to generate 4-level pulse amplitude modulation (PAM4). In this broadband modulation scheme, the amplitude of the most significant bit (MSB) is 2x the amplitude of the least significant bit (LSB). HYPERLABS’ HL5567 PAM4 encoders are a single component solution, perfectly suited to perform PAM4 encoding. Using two nearly equal amplitude nonreturn to zero (NRZ) serial data streams, the LSB is connected to the pick-off port and the MSB is connected to the input (see Figure 19).

In Figure 20, two 50 Gb/s serial data streams were combined using an HL5567 PAM4 encoder to create a 100 Gb/s PAM4 signal. The LSB and MSB data patterns were 7th order pseudorandom binary sequences (PRBS7). A PRBS7 data pattern is 127 bits long. The LSB data pattern was delayed by 39 bits relative to the MSB data pattern. The entire pattern length of each input signal can be found in Figure 20. Eye diagrams of the input signals are shown in Figures 21 and 22. 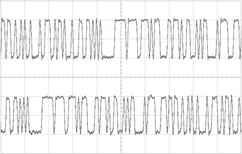 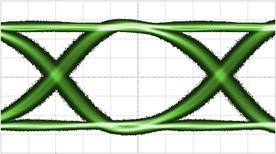 Output signals representing each input individually and in combination were examined. First, each input signal was connected to the HL5567 individually with the opposite input terminated into 50Ω. The corresponding binary output waveforms were captured and appear in Figure 23 (top and middle). Finally, both input signals were connected simultaneously and the combined PAM4 output waveform was captured and can be seen in Figure 23 (bottom). Output eye diagrams are presented in Figures 24 to 26. 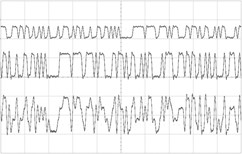 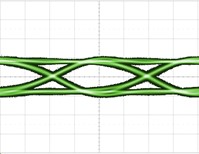 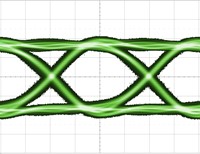 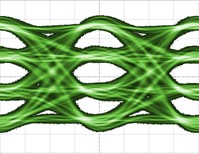 It is important to keep in mind that the HL5567 PAM4 encoder is a resistive passive network. This feature allows any data pre-emphasis to pass through the device without any non-linear effects. 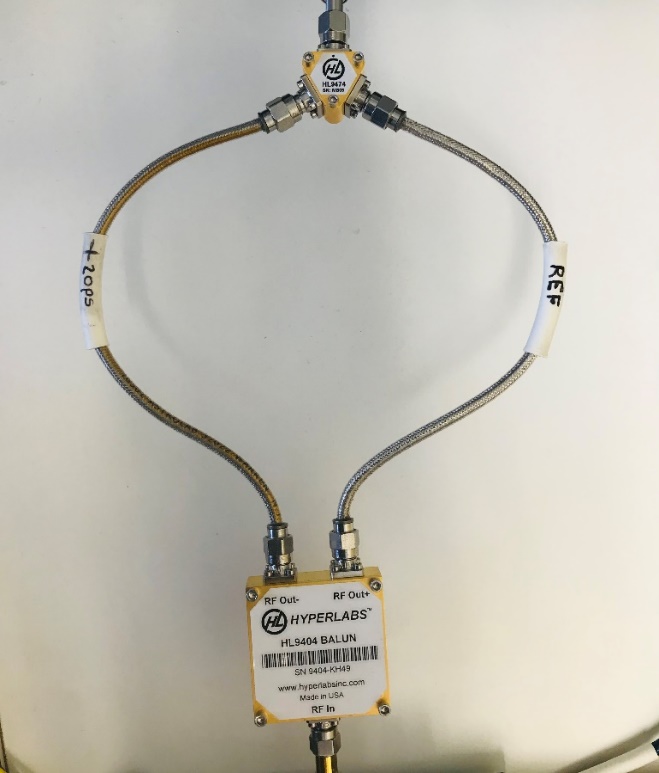 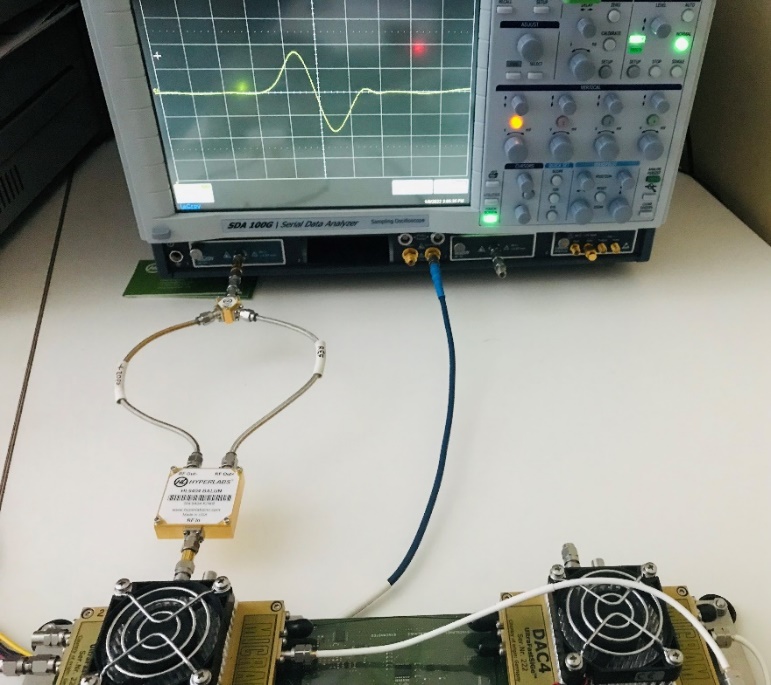 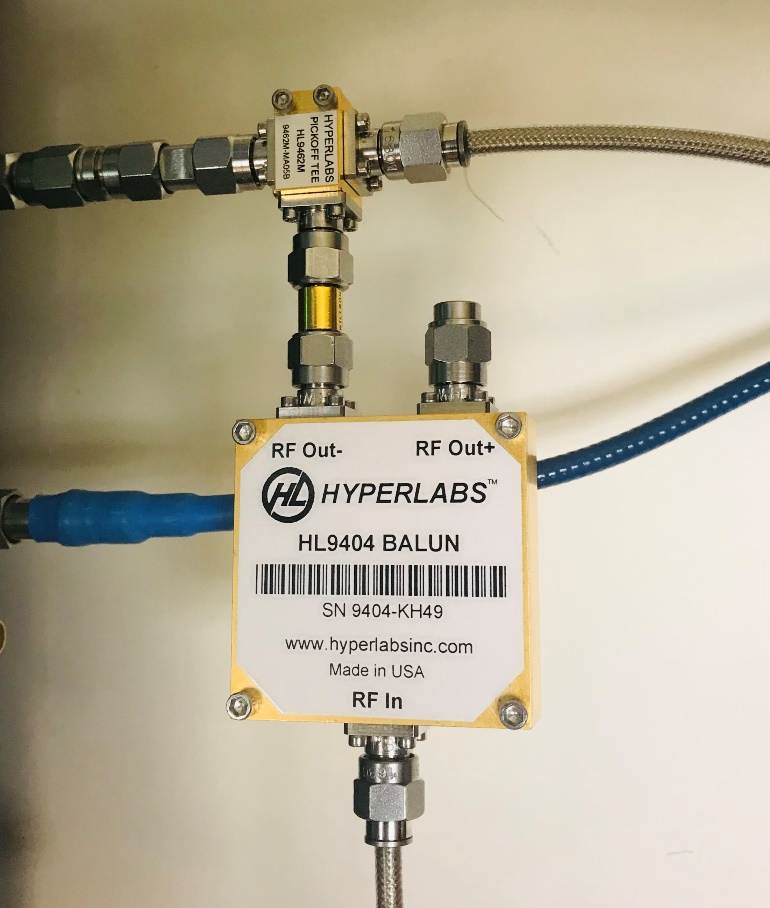