Way back in 2007, EDA companies collaborated to drive an extension to the IBIS standard called the algorithmic modeling interface (AMI) to enable simulation of multi-gigabit serial link interfaces. This went hand-in-hand with channel (as opposed to traditional circuit) simulation, which enabled many bits of traffic to be simulated. The data rates back then were typically in the 2.5 to 5Gbps range—right about where DDR4 and DDR5 sit today.

A couple of things drove that original need for channel simulation and AMI in serial links. One was the requirement to analyze eye diagrams vs. a mask (i.e., waveform keepout area) at a particular bit error rate (BER). It wasn’t practical to simulate empirically to determine BER (simulating 1e16 bits still isn’t practical today), so it was necessary to extrapolate statistically to calculate BER. But to do that reliably, one must start with a big distribution and lots of samples, like the kind you get when you simulate hundreds of thousands or even millions of bits of traffic.

That feat still wasn’t practical with traditional circuit simulation, which historically gave reasonable run times in the range of hundreds of bits of traffic (see Figure 1). To address this, the first commercial “channel simulation” was introduced. Here, assume linear time invariance (LTI), find the impulse response for the channel, and convolve it with a big input stimulus to generate tons of waveforms very quickly at the receiver. Suddenly a few million bits could be simulated in a couple of minutes, the eye distribution could be distributed, and it could be post-processed to produce bathtub curves and BER could be calculated for the interface (see Figure 2).

With that in place, the next step was to model the advanced equalization (EQ) that was starting to become common (see Figure 3), like feed-forward equalization (FFE), continuous time linear equalization (CTLE), and decision feedback equalization (DFE). Again, circuit models were way too slow to efficiently model the real-time adaptive EQ, and so AMI was born to provide executable models with an industry-standard (IBIS) API, which could be linked into the channel simulator at runtime. The industry followed suit quickly, and everyone has been simulating serial link interfaces ever since. 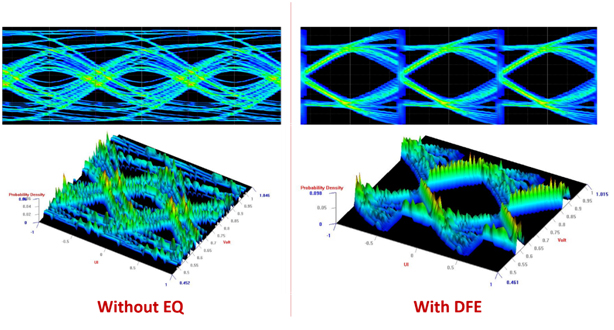 Figure 4. Channel simulation results (2D and 3D) with and without equalization

One of the big differences this time is the ability to generate AMI models. They are like “fuel for the car,” so to speak, with the car being the channel simulators like SystemSI. Back with the first wave of AMI modeling for serial links, one needed to be part programmer, part SerDes architect, and part SI engineer to develop AMI models, largely from scratch. That Venn diagram got very thin very fast, so the few people that existed in the middle of that diagram charged some very big numbers to develop models for those that needed them. With this second wave, tools now exist that make it straightforward to build quality AMI models from a rich set of known good library modules, with a wizard-based UI that walks through the process.

Take, for example, CTLE. These are basically peaking filters, and can be easily described in time domain, real imaginary plots, magnitude vs. frequency, pole zero, or rational function format. These can all be imported into a tool, such as (my company’s) Cadence AMI Builder, as shown below: 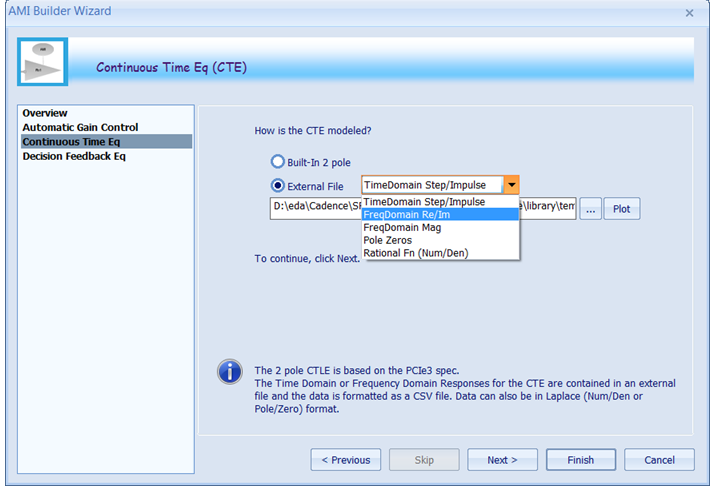 If you can use SI tools and know something about the EQ you are modeling, you can get there rather quickly now.

Of course, there are other differences, such as single-ended instead of differential signals, and external strobe signals instead of clock recovery. But what was old is new again. Channel simulation and AMI modeling 2.0 is upon us. We can make our own fuel this time and skip the long lines and inflated prices.

I consider that progress.