Pat parlayed his engineering background into a management role in marketing communications for several leading semiconductor vendors. Currently, he is a contributing editor to Signal Integrity Journal as well as serving as Editor for Microwave Journal, where he sets MWJ’s editorial direction and develops market opportunities.

This is the first year that NIWeek has taken place in late May instead of its normal early August time slot and switches permanently to this part of the calendar. NIWeek 2017 kicked off with new CEO Alex Davern paying tribute to Dr. T with a standing ovation from the audience. 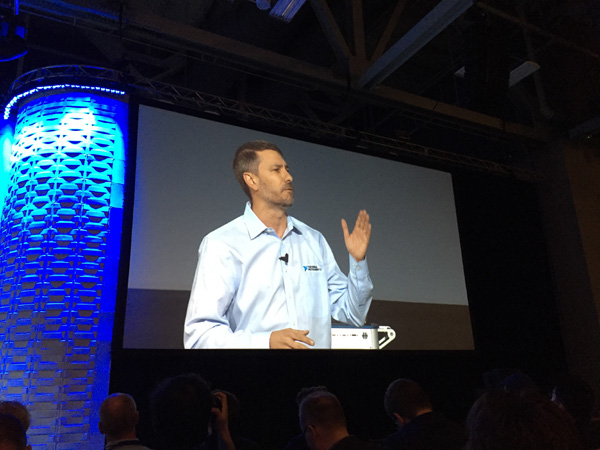 Eric Starkloff, EVP of Global Sales and Marketing, outlined how the industry is moving very quickly with 5G, autonomous cars and commercialization of space. As 5G schedules get pulled in, researchers and companies need to proto-type quickly and NI has been equipping many of them with their platform.  An example is the 28 GHz channel sounder, aka the porcupine, which is allowing AT&T to measure all directions in real time which previously was not practical. Also in this area, they announced new 28 GHz radio heads for the mmWave transceiver system. They transmit and/or receive up to 2 GHz of bandwidth in real time.

DARPA took the stage to discuss their spectral co-existence program, The Spectrum Collaboration Challenge (SC2).  The SC2 challenges teams to develop wireless devices will have full access to the increasingly crowded electromagnetic spectrum by finding new spectrum access strategies and develop a new wireless paradigm in which radio networks will autonomously collaborate and reason about how to share the RF spectrum, avoid interference, and jointly exploit opportunities to achieve the most efficient use of the available spectrum. DARPA has selected 30 teams for Phase 1 of a $3.75 million competition to kick it off later this year. Teams will battle in the “Coliseum,” a next-generation electronic emulator of the invisible electromagnetic world with impressive attributes: 65,536 channel interactions, 25.6 GHz of instantaneous bandwidth, 52.43 TB/s of digital RF data and 1.88 TB of scenario model data. Could this be the beginning of 6G goals? 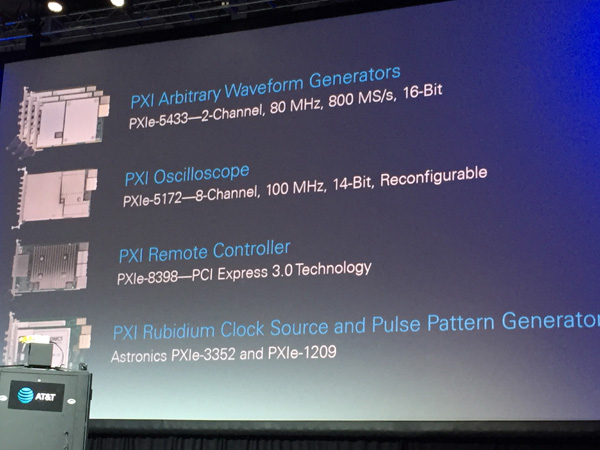 NI announced the integration of Time Sensitive Networking (TSN) Into the CompactDAQ Platform with new 4- and 8-slot Ethernet chassis that deliver time-based synchronization over Ethernet to the CompactDAQ platform for distributed measurement and test systems. These achieve sub-microsecond synchronized timing over standard Ethernet. 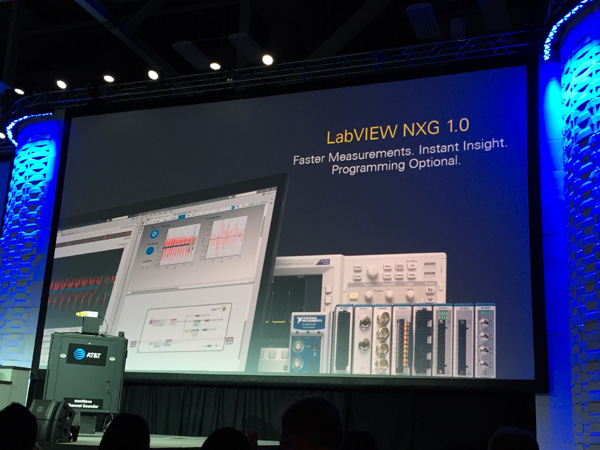 While LabView 2017 was released with new features, it was the next generation of the platform, LabVIEW NXG 1.0, which was the star of the event. Built on modern day code, the new platform is available with LabVIEW 2017 at the same price and offers the next generation of LabVIEW engineering system design software.  LabVIEW NXG bridges the gap between configuration-based software and custom programming languages with a new approach to measurement automation. “Thirty years ago, we released the original version of LabVIEW, designed to help engineers automate their measurement systems without having to learn the esoterica of traditional programming languages. LabVIEW was the ‘nonprogramming’ way to automate a measurement system,” said Jeff Kodosky, NI cofounder and business and technology fellow, known as the ‘Father of LabVIEW.’ “For a long time we focused on making additional things possible with LabVIEW, rather than furthering the goal of helping engineers automate measurements quickly and easily. Now we are squarely addressing this with the introduction of LabVIEW NXG, which we designed from the ground up to embrace a streamlined workflow. Common applications can use a simple configuration-based approach, while more complex applications can use the full open-ended graphical programming capability of the LabVIEW language, G.”