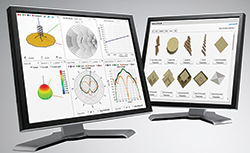 Fortunately, research into the use of the evolutionary algorithms (EA), a programmatic method to explore the design space and automatically locate superior antenna designs, offers a means to accelerate the overall design process. EA is proving to be highly effective at generating antenna structures with greater performance than would otherwise be developed by traditional methods. AntSyn™, a combination of EA with RF/microwave simulation, has been successful in the development of a variety of antenna types for aerospace applications, and it is now available as a commercial product from National Instruments (NI).

AntSyn is an automated antenna design, synthesis and optimization tool that enables users to input antenna engineering requirements and output antenna designs. AntSyn was designed to be used both by experts and those who are relatively new to antenna design. 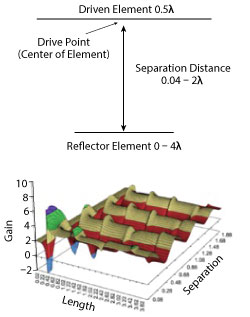 Figure 1 Antenna design complexity illustrated by the range of gain from varying the dipole length and reflector separation of a simple antenna.

A properly designed antenna is typically characterized by a number of critical performance metrics that are driven by the target application. Chief concerns relate to the directional characteristics (as depicted in the antenna’s radiation pattern) and the resulting gain. As a result, the range of antenna design types is extensive, with a very large number of shapes, sizes, requirements and applications. Designing and optimizing antennas by hand requires significant domain expertise. This time and labor intensive process depends on the aptitude or expertise of the designer to identify a suitable initial design that can be optimized to achieve the desired results (see Figure 1).

It is not uncommon for an experienced engineer to consume several months developing a new antenna design, depending on the level of difficulty defined by the antenna specifications. The time and effort invested increases significantly when addressing factors such as antenna interaction with the platform or wireless device and co-site interference. Design delays are compounded when program requirements change, such as in early stage development or where antenna integration requires in-situ optimization. The ability to conduct rapid antenna design and redesign is a growing concern as the number of wireless devices proliferates.

As an alternative or adjunct to designing by hand, since the early 1990s, researchers have been investigating methods based on evolutionary antenna design and optimization. One highly successful technique from NI is based on EA. This technology has been developed into a complete antenna synthesis tool, AntSyn, and has been used successfully by companies and government agencies operating in aerospace, communications and wireless electronics markets to design antennas operating at frequencies from below HF (2 MHz) to above Ka-Band (40 GHz). In contrast to the man-months of engineering time typically required for a final antenna design, AntSyn can generate a design in hours, optimizing trade-offs between criteria and often producing counter-intuitive designs that outperform traditional antennas.

AntSyn operates on a “what you want is what you get” principle, where the user inputs the antenna requirements, rather than a (parameterized) physical design. Antenna specifications such as frequency band, target impedance match (return loss), and gain pattern are input into the intuitive “spec sheet” user interface, which is automatically organized into a project file (see Figure 2a). By running the spec sheet, AntSyn returns one or more optimized antenna designs, the results of which are viewed using a customizable dashboard for rapid evaluation (see Figure 2b). 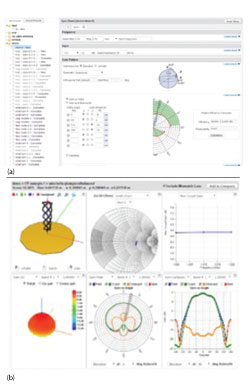 Several types of antennas that generate modest gains with good linear or circular polarization over significant bandwidths include:

Navigating which of these antenna configurations achieves the best overall performance for the reduced size, weight and cost demands is a challenging task, especially as non-traditional companies jump into wireless-enabled devices called for by the Internet of Things (IoT) and small satellite (NanoSat or CubeSat) markets. NI is addressing this challenge with smarter design and test solutions spanning early concept through final verification. 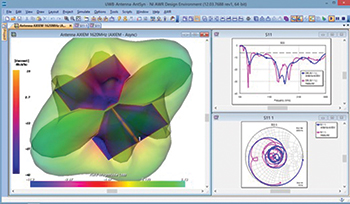 Figure 3 The AntSyn design is easily exported for final verification, whether to AXIEM or Analyst, within NI AWR Design Environment, or other 3D EM simulators.

AntSyn provides an automated antenna design, synthesis and optimization tool that is well suited for helping designers of antennas, RF components and system engineers of many skill levels to address the challenges of next-generation antenna design and integration.

Beware of Misinterpreting Measurements Without This Key Piece of Information