As high-performance computing, artificial intelligence, and machine learning algorithms, and even consumers become increasingly data-hungry, hardware struggles to keep pace. In addition, the need for real-time assessments of moving data points – such as for the accurate velocity-mapping of other objects in autonomous systems and facial recognition for security systems – is crucial to an increasingly hands-free society. IDTechEx's latest report, "Semiconductor Photonic Integrated Circuits 2023-2033,” examines the players responsible for technological developments that hope to address the aforementioned needs across multiple markets. Generally speaking, the promise of semiconductor photonics can be summarized in four words: More Data, More Quickly.

Where and How Photonic Systems Excel in Comparison to Electrical Systems

A discussion around the effectiveness and applicability of photonic integrated circuits must be contextualized by comparing the system to its electrical-only counterpart, electrical integrated circuits. Most semiconductor chips in existence today are entirely electrical; they are compact packages (most measured in square millimeters) consisting of billions of transistors ('on or off' switches) that can be used to store and process data, where electricity is used to operate them. A photonic integrated circuit uses light (photons being the quanta of light) to transmit data, though it will likely have some electrical components also, such as a laser diode source that is electrically pumped and emits photons as a result.

While the architecture of a PIC is somewhat different from an electrical IC, PICs can and have been created by leveraging the same manufacturing processes as for the more mature electrical IC industry; just as silica and similar materials act as effective dielectric insulators between the copper traces in electrical ICs, they are also able to confine and 'guide' light, in fiber or waveguide configurations. By virtue of their physical properties, photons do not experience resistance in the same way that electrons do. Instead, photons can be lost via material absorption, scattering, or other effects, which can be mitigated by a careful choice of materials. When injection and propagation losses are suitably mitigated, photonic systems can enable long-distance communications of substantial amounts of data, where sending data via electrical means is unwieldy due to the resistance in the conductive material. The use of light to transmit and receive data has enabled a revolution in the communications industry, an industry that is continuing to develop products to enable higher data transmission rates. 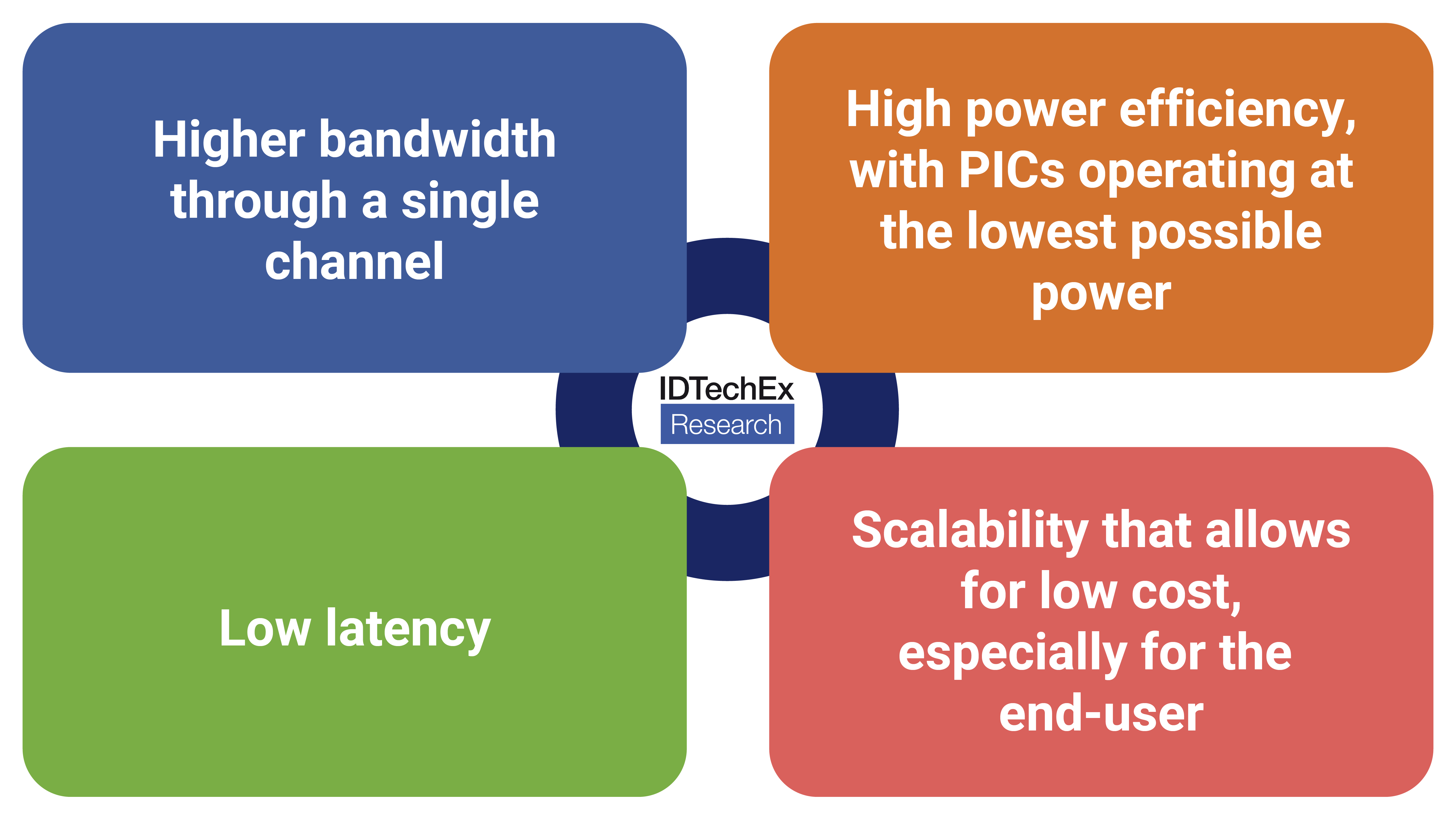 Four key market drivers for PIC development. These are due to growing data demands across multiple market segments and applications, such as communications and networking, AI/ML algorithm runs, and HPC. Source: IDTechEx

Light at the Frontier of Data

One of the ways in which photonic systems are being developed in the communications industry is to address the Input/Output (I/O) bottleneck. This is where data is unable to be moved into or out of a chip/chiplet at the same or faster rate than the rate at which processing occurs. As such, a backlog is created in the data stream, where processing/storage conducted in other chips/chiplets is stalled while they await the data. This is a significant problem for systems that deal with large amounts of potentially unstructured data, but require low latency to function, such as neural-language programming algorithms. Several companies are working on optical I/O solutions that reduce latency, allow for high bandwidth, and keep power expenditure at a minimum. 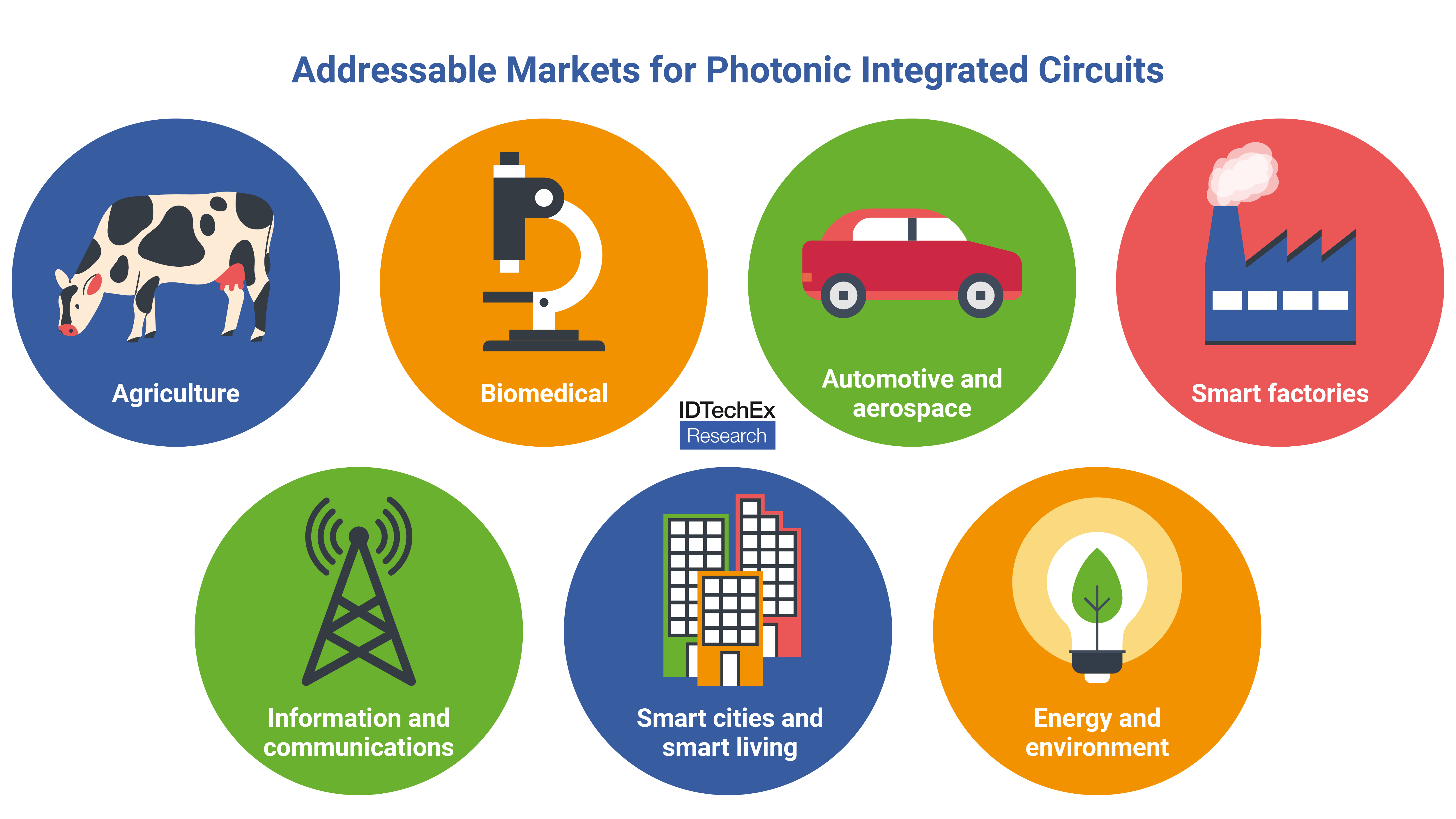 The IDTechEx report covers the global PIC market across six different application segments by giving a 10-year forecast for each, up to and including 2033, in terms of the market value of PIC systems. The principal focus of the report is the communications industry, given the maturity of PICs within this industry compared to the more emerging nature of PIC deployment within the other industries reviewed.

Additionally, the report covers evaluations of materials used in PIC design and manufacture, the developments being undertaken by large companies and start-ups alike to improve on key metrics such as performance and cost from both a systems and architecture perspective, as well as a thorough review of the product offerings by key market players.

While the importance of photonic circuitry at the chip-scale is already in evidence within the communications industry, there are questions around the ease and cost of adoption of PICs for other markets compared to incumbent technologies. IDTechEx's latest report, "Semiconductor Photonic Integrated Circuits 2023-2033," answers the major questions, challenges, and opportunities faced by photonic integrated circuit technologies