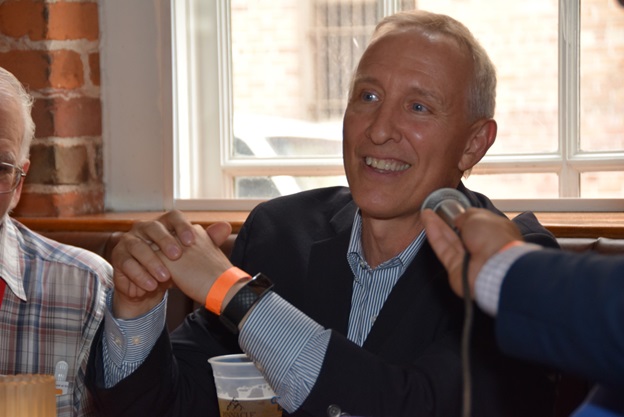 Todd Hubing, answering a question at the Young Professional Jeopardy Show at the 2019 EMC Symposium. Photo courtesy of Richard Georgerian.

At the 2019 EMC Symposium, I had the opportunity to sit down with Todd Hubing, the Symposium Technical Program Chair and industry EMC expert, to learn that he never had any intention of going into the field of EMC.

When applying to his first job at IBM, he was offered two equally exciting job opportunities. One was in the acoustics lab and one in the electromagnetic testing lab. Acoustics had been his passion for most of his education. But, when touring the two labs, he saw the electromagnetic compatibility lab to be more vibrant, with a number of engineers in animated discussion debugging a product torn apart in the chamber. Which one to choose- the lab where his long-time passion lay or the lab where there seemed to be no end of technical challenges.

He chose the electromagnetic compatibility lab. This decision launched Todd on his current career path and has had a profound impact on the direction the EMC industry has taken over the last 35 years.

During his seven and a half years at IBM, he worked concurrently on a PhD at North Carolina State University. This was a chance to define his own research project that dived into the underlying mechanism of how common current can be a dominant source of radiated emissions and EMC test failures.

After his degree, he taught a course at NCSU, conducted research on the side and worked on product development at IBM as his day job.

When his wife completed her Ph.D., she suggested they apply for university positions. It was at his first interview for a faculty position, where he learned that the two primary responsibilities of university faculty were teaching and self-directed research. Only then did he appreciate that the two things that he enjoyed doing in his spare time at IBM, could be his primary focus. “I had found the perfect occupation,” Hubing said.

His experience at IBM working in the EMC test lab and at the same time thinking of research projects gave him a unique perspective. One side project he was asked to do by IBM was find a university to award a grant to conduct research in support of the EMC lab. After searching through candidate universities and talking to faculty, he could find none interested in doing research relevant to product design for EMC. He realized there was an opportunity here.

When he started his first faculty position at University of Missouri at Rolla, he brought this vision with him: to create a research program that would tackle problems the industry cared about.

With Tom Van Doren and later Jim Drewniak, Todd built up what is currently the world renown MST EMC Lab. At the 2019 EMC Symposium, a reception attracted more than 85 alumni engineers who had graduated or worked at the Lab, all significant contributors to the EMC industry.

After leaving MST, Todd joined the faculty of Clemson University as the Michelin Endowed Chair in Vehicle Electronic Systems Integration. He left Clemson in 2015 to grow his own company, LearnEMC. Over his 26 years as a professor, he has graduated more than 50 students with MS or PhD degrees in electromagnetics.

LearnEMC, (https://learnemc.com/), which he runs with his wife, Nancy, also a PhD electrical engineer, focuses on his specialty, teaching engineers the essential principles and how to apply them to solve electromagnetic compatibility problems before they prevent a product’s release. His company offers live, public classes at their facility in Stoughton, Wisconsin, and on-site courses at a company’s facility. The next public classes are scheduled for Oct 21-24.