Many of us are familiar with the IEEE for its technical conferences, and development and publication of technical standards.  A far smaller number of us know that it’s also a humanitarian organization, with a motto of “Advancing Technology for Humanity.”  This article is about that little-known aspect of IEEE.

Mary Ellen Randall, then IEEE Region 3 Director, had a vision for the MOVE (Mobile Outreach Vehicle) truck.  She assembled a group of IEEE member volunteers to define a disaster relief program where IEEE members could engage, use their problem-solving skills, and demonstrate the technologies we develop while helping others. 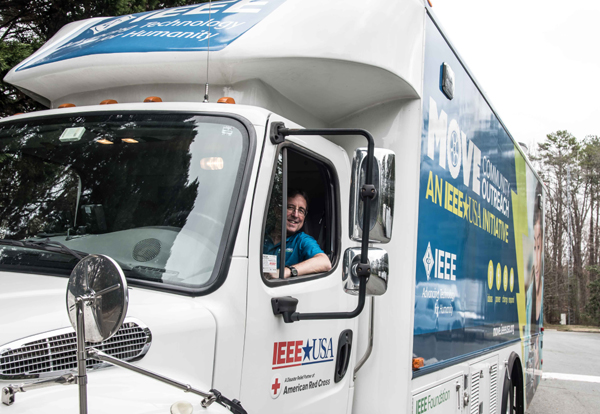 Figure 1.  The author in the driver’s seat

The concept was then focus group tested with survivors of Superstorm Sandy and Hurricane Katrina.  These two storms provided wide spread flooding, long term power outages and damage from high winds.  The focus group’s participants described their experiences with long term (10-12 days) power outages.  They described how much they needed their cell phones to learn about conditions around them, what lengths they went through to keep them charged and the effect of darkness night after night.

Once the concept was verified, funding approved by the IEEE-USA Board and a relationship with the Red Cross, a disaster partner, were needed to round out the vision.  The initial team went on to design the vehicle, including the power system, communications needed and had it professionally built.

The objectives of the truck are twofold:  first, to provide power and communications in areas where those services have been disrupted by floods, hurricanes, other storms, wildfires, and other emergencies.  Secondly, when not deployed for a disaster, to provide a platform for STEM (Science, Technology, Engineering, and Math) education events, and showcase how engineers use their skills to help humanity beyond just designing and building things.  Figure 2 is a cutaway view of the truck showing some of its equipment.

Power is provided by three 300 W solar panels or a 10 kW diesel generator that runs off the same diesel tanks used for the truck engine.  The generator powers the truck’s systems including heating and air conditioning when needed, and can also supply power to external outlets or a small building for a field office operation running, for example, lights and small computers.  Auxiliary batteries are used to store the energy for when the sun is not shining, and may be charged by either the solar panels or the generator.

Communications equipment includes a satellite dish and modem for Internet service, a Direct TV dish and modem for reception of news, weather, etc., and a Cisco Meraki managed switch to support network connections for computers and Internet Protocol (IP) phones using the satellite modem, and video conferencing via satellite.  There are currently no radios on the truck, but many options are being explored including the VHF and UHF equipment used by the Red Cross, amateur (“ham”) radios, public service/emergency management radios.  Many of the IEEE volunteers who staff the truck are ham operators, but there are special requirements for using frequencies used by public service and emergency management organizations.

The truck also has a rack that’s used to hold trays for charging solar battery packs (see Figure 3) that are loaned out to the Red Cross workers who service the disaster victims (“clients”), to recharge their cell phones when needed.  These 8 AH battery packs can supply 2-3 phone recharges before needing to be recharged themselves.  Powered by the generator, up to 120 battery packs can be charged at one time. 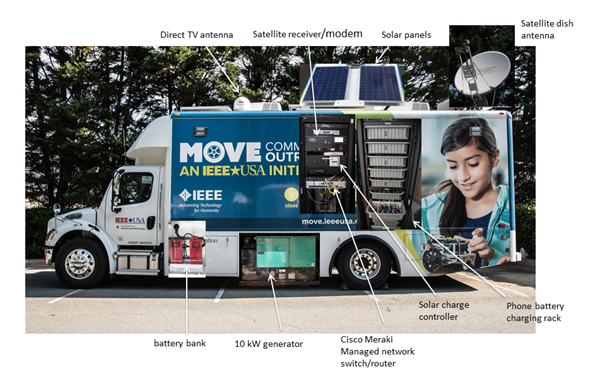 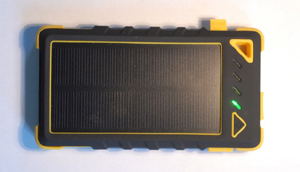 The truck, which is based in North Carolina, is deployed as a partner of the Red Cross.  This has two benefits:  it gives the Red Cross the ability to decide where the truck can be of maximum benefit, and it provides access to a disaster area using Red Cross credentials.  The MOVE truck can drive into a parking lot and have Internet access and power available within about 15 minutes of arrival.  Once the Red Cross Disaster Services Technology (DST) group is deployed and set up, the MOVE truck is often then redeployed to another location.  The Red Cross provides food and lodging (which can be anything from a hotel to a staff shelter), and the IEEE funds the operation of the truck.  Staffing of the truck is done using IEEE member volunteers.  There are currently five trained drivers, and approximately 100 volunteers in the eastern US who are trained to operate the truck systems.   A Commercial Driver’s License (CDL) is not required to drive the truck since it’s under the 26,000 pound federal weight limit, but special training is required for safety and insurance reasons.  Deployments are typically for a minimum of two weeks, but can be much longer, depending on the nature of the disaster and crew availability.  The truck was delivered in March of 2016, and has been deployed to nine disasters to date, including flooding events in Louisiana, Missouri and West Virginia, after Hurricanes Matthew, Harvey, Hermine and Irma, and wildfires in Tennessee.   It’s also been to the 2017 Solar eclipse, the 2017 Boy Scout National Jamboree, and a number of STEM events.  Sample photos from recent deployments are included in Figures 4 and 5 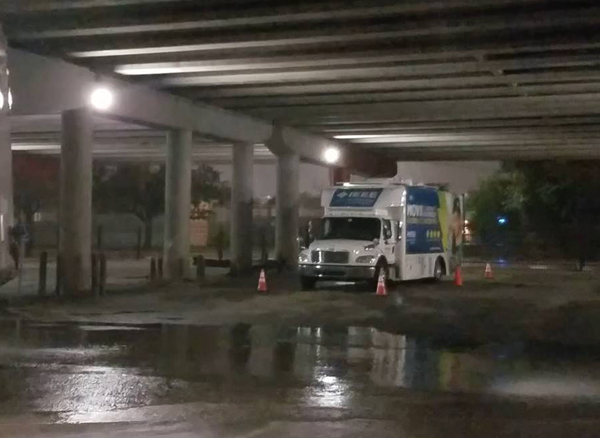 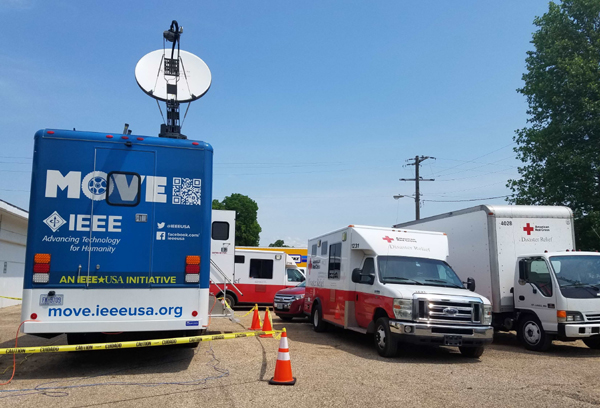 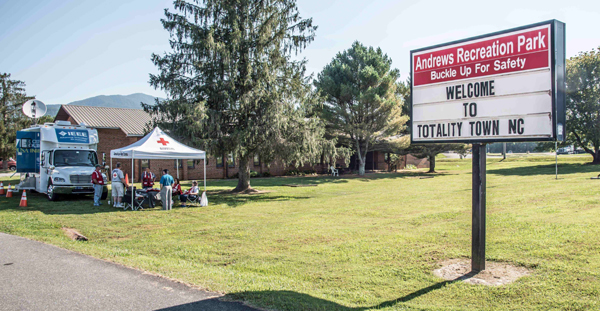 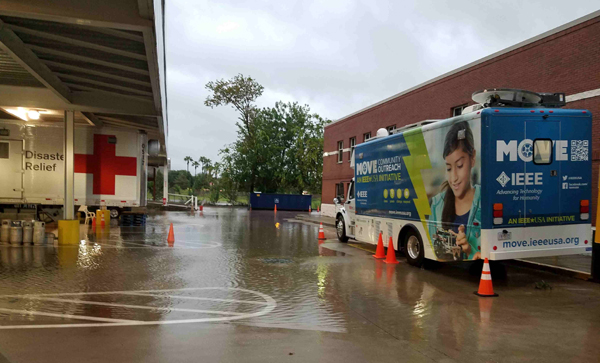 Many of the MOVE team members are also trained with the Red Cross DST group, and have been deployed independently of the truck (when it’s busy or already staffed) after Hurricane Matthew and Irma, to Puerto Rico following Hurricane Maria, as well as other locations.

Construction and operation of the MOVE truck is funded completely by donations to the IEEE-USA MOVE fund of the IEEE Foundation.   Donations of money and equipment by individuals and corporations are greatly appreciated.   Donations above a certain amount will be acknowledged by adding the donor’s name to the side of the truck.  There are discussions occurring around building additional MOVE-like vehicles in other parts of the US and in other countries.  For more information on the truck, you can go to http://move.ieeeusa.org.  There is information there on some of the truck’s deployments.  If you’d like to volunteer to work with the MOVE truck team, please sign up at move.ieeeusa.org or contact merandall@ieee.org .  As you can tell, the IEEE is more than just conferences and standards.  The MOVE truck is just one example of how the IEEE works to benefit society.    If you would like information on other IEEE humanitarian programs, search on Humanitarian Activities Committee and SIGHT on the IEEE website, http://www.ieee.org

Joseph C. (Jay) Diepenbrock is an independent SI/RF consultant.  He had a long career at IBM in development and procurement engineering, and has authored or co-authored a number of papers in various areas of electrical engineering.  He has a number of hobbies, including disaster relief.  He can be reached at sirfconsultants@gmail.com.