At the recent 2016 IEEE EMC Symposium in Ottawa, I had the opportunity to talk with two of the worlds’ experts on high frequency electrical characterization of interconnects and gained new insight on best practices for connector modeling and measuring.

Heidi Barnes is the ADS application engineering specialist with Keysight Technologies and Jim Nadolny is the Principle SI Engineer for Samtec. Between them, they have more than 40 years’ experience at precision electrical measurement and modeling methods.

“Everyone asks for models, but they really don’t know what they want or need.” Heidi says. If the application is above about 1 GHz, SPICE based models aren’t very accurate, so the model has to be in the form of an S-parameter behavior model.

It is rare the S-parameter model comes directly from a measurement since the board or cables connecting on either end of the connector has to be exactly the same as what is used in the final customer’s configuration. This means most connector models come from 3D full wave simulations.

“It’s easy to simulate a connector model,” Jim says, “However, it takes a lot of experience and know-how to get it right. To get it right requires attention to material properties, configuration of the return path, excitation port setup and accurately representing the mating PCB stackup ”

It is impossible to accurately separate where the connector ends and the board or cable begins. 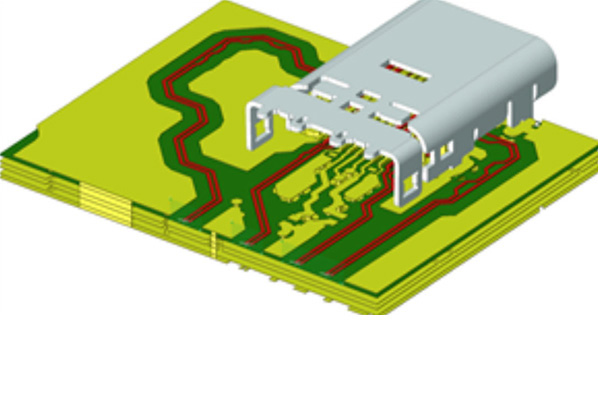 Figure 1. Close up of a USB 3.1 connector with uniform transmission lines to the edge of the board where the connector model ends. Courtesy of Heidi Barnes, Keysight Technologies.

“Our customers ask for models for connectors, but they may not appreciate the importance of the mating PCB on the resultant performance” Jim says.

Samtec, as well as all the high end connector vendors, offer a service to provide a complete model of their connector with the custom board stack and routing provided by the customer. Including the final inch interconnects in the connector model is one of the three types of models Samtec creates.

Their minimalist connector model uses coax port connections to the end of the connector. This model is used to optimize the connector design and is used for rapid-turn internal development. This “Zen” model is often used to extract the three most important figures of merit of a connector, the characteristic impedance, the channel to channel cross talk and the return loss.

When validating the connector models from 3D full wave simulations, Samtec builds a board with minimal board level interconnects to fan into the selected connector pins. This model does not have to match the customer applications. It is optimized for high bandwidth measurement.

In these applications, the connector is embedded in a board with coaxial connectors to interface to a VNA. The board acts as a geometry transformer to go from the coax of the VNA to the board level uniform transmission lines feeding the connector.

“This makes the technology to “de-embed” the connector and its breakout region from the rest of the fixture on either end a critical step when comparing the measurement to the 3D model,” Heidi says. “The Keysight Automatic Fixture Removal (AFR) method is one of the more popular approaches to de-embed devices under test from measurement fixtures.”