The columns contained in this SI/PI/EMC & EMI Fundamentals section come from members of the Signal Integrity Journal community who are experts in their field and have a commitment to providing training and education in SI/PI/EMI issues for other engineers.
Signal Integrity / Power Integrity / EMC/EMI
Stefaan Sercu received his MSEE from the University of Ghent, Belgium in 1992. In 1999, he obtained his PhD degree in electrical engineering from the same university. From 1998 until 2013, he was employed by FCI where his work focused on the development and testing of next generation high speed connectors and interconnection technologies. In 2014, Stefaan joined Samtec as a Signal Integrity R&D engineer. In this function he studies all SI related issues of current and next generation high-speed connectors and interconnects and methods to overcome them.

As a high-speed interconnect supplier, we need to present measurement results that are accurate, reliable, and of good quality. Many of our customers use these results to decide if a certain connector can be used in their next-generation system. Impedance corrected de-embedding is a method that helps to achieve this requirement.

Before I explain impedance corrected de-embedding, first I need to explain test-board de-embedding. When characterizing a new high-speed connector, we mount it on a test fixture, typically a PCB terminated with a coaxial launch connector. As a result, we are measuring not only the performance of the connector but also the performance of the test-boards. These test board measurements are unwanted since the objective is to measure the performance of the connector only. To remove the impact of the test boards, a model for the test-fixture is required. Once this model is available it can be de-embedded, or you might say it’s “subtracted” from the original measurements. To obtain the test-fixture model, typically a 2x calibration trace is bifurcated. This is illustrated in Figure 1: 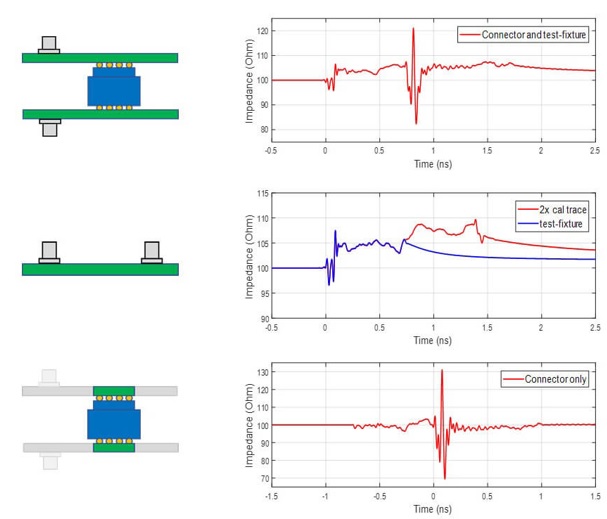 Figure 1: To obtain the test-fixture model, typically a 2x calibration trace is bifurcated. The top image shows he connector plus test fixture impedance combined, the middle shows them separating, and the bottom shows the impedance of the connector.

The bottom image in Figure 1 shows the impedance of the connector only after test-board de-embedding. This impedance is clearly not causal, which is the main problem of standard de-embedding methods. 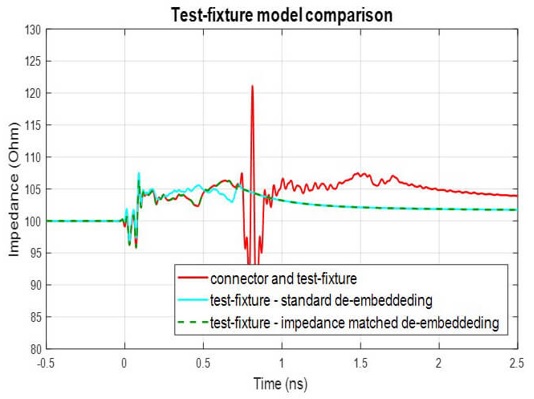 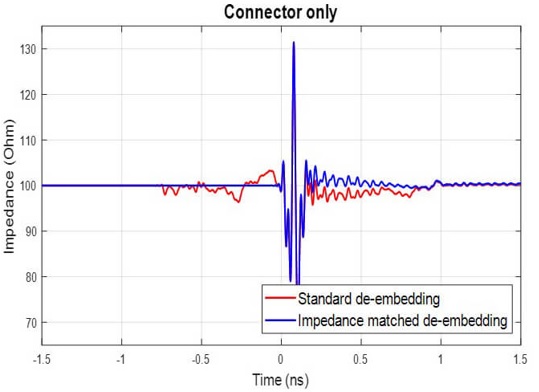 Figure 2: (a) top image shows a comparison of test fixture models used for de-embedding the connector, and (b) bottom image shows the subsequent connector model 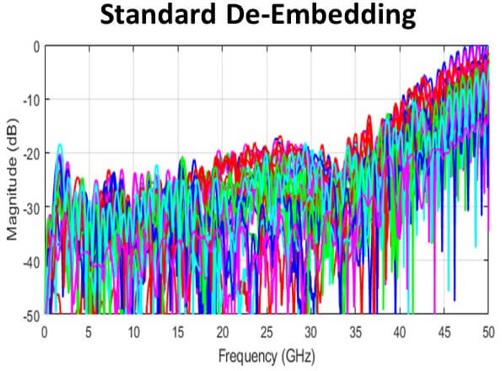 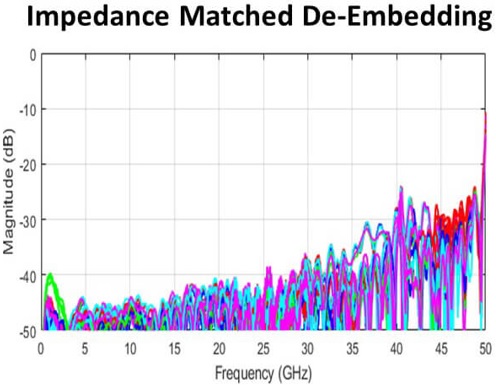 Figure 3: A comparison of two methods for de-embedding. Using an impedance matched de-embedding method results in a 20 dB improvement.

An earlier version of this post appeared on the Samtec blog.