High frequency semiconductor switches have gone through several major transformations over the last few decades. In the 1980s, GaAs MMIC switches took over many of the high-volume applications such as handsets with much better performance than traditional Si based switches. They were dominant in the market until Si on insulator switches were able to obtain similar performance but at a lower cost. SOI switches now own these high-volume markets in most applications. While MEMS switches have been around for years, they were plagued by reliability problems for many years. But now Menlo Micro is producing some interesting switches using their unique MEMS process that is high performance and reliable. They use a special metal alloy that overcomes reliability issues and a RF glass substrate that is low loss (from Corning). In the wireless area, they recently released a DC-26 GHz switch with IP3 greater than 85 dBm with 1.3 dB loss and 25 W of power handling. 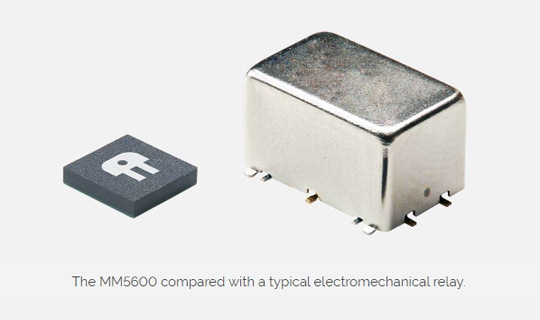 Now they have used the same technology to produce the MM5600 that is a DPDT DC-20 GHz switch that can operate to 40 Gbps and well suited for differential signal switching. The integrated driver can be controlled by a serial-to-parallel interface that drives the high voltage gate lines of the switches. The design also offers a considerable 94% reduction in size when compared to conventional EM relay solutions. An external +5 VDC logic supply and high voltage +89 VDC bias source is required for operation of the internal switch driver.

From their news release, the switch provides a best-in-class differential switching solution for high-speed digital applications based on the latest PCI Express standard, PCIe Gen 5, which doubles interconnect speeds over the PCIe 4.0 specification (32 Gigatransfers per second versus 16 GT/s). Faster PCIe speeds are essential for next-generation artificial intelligence, machine learning, 5G infrastructure, data center and cloud-based applications, as well as ATE device interface boards and high-speed computer peripheral interfaces. The MM5600 switch also can be configured for single-ended operation for RF and microwave applications.

Differential modes: integrated driver offers two modes of operation and can be controlled through a serial or parallel interface

IP3 linearity: IP3 linearity of more than +90 dBm with a power handling capability of +33 dBm, enabling large reductions in distortion and delivering up to a 10,000x improvement over existing EM relays and solid-state switches

We will be closely following Menlo Micro in the both the high-speed digital and microwave markets to see how they progress with this technology.